Irish property price inflation edges higher to 1.4% in November from 1.0% in October

Irish house price inflation edged higher  in November to stand at 1.4% up from October’s 1.0% increase which was the  lowest rate in six and a half years. The behaviour of property prices in the past couple of months offers tentative evidence that the drop in Irish property price inflation may be bottoming out. However, this process could remain quite bumpy over coming months.

A healthy Irish economy is now producing a faster pace of growth in employment (+2.4%) and in earnings (+3.4%) than in property prices. With new supply increasing but still running well below levels that would ‘clear’ the housing market, it may be that we will move towards more sustainable rates of growth in property prices in 2020.

The sustained and substantial slowdown in Irish residential property price inflation since a three year peak of 13.3% was recorded in April 2018 owes something to a continuing increase in new supply which is curbing any tendency towards ‘panic buying’. However, new completions are likely to be around 21k in 2019, almost 20% higher than in 2018 but about a third lower than most estimates of ‘natural’ demand and, consequently, are still running well short of levels that would deliver a sustainable equilibrium in the housing market.

Moreover, as diagram 1 below illustrates, looking through month to month volatility, household buyers have not materially increased their purchases of new-builds through the past year or so. As a result, the share of new building being purchased by household buyers (as opposed to institutions or public sector bodies) has fallen significantly through 2019. So, the impact of increased supply hasn’t materially boosted the purchasing options available to household buyers of late. 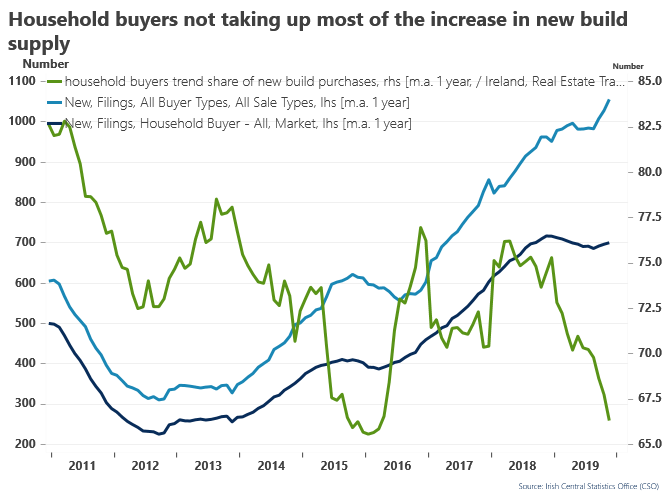 A significant gap has opened up between effective and underlying demand

As we noted previously, affordability constraints, heightened by Central Bank lending limits, have translated into a marked slowdown in demand growth. As diagram 2 below highlights, the number of mortgage drawdowns for property purchase and the average loan size of those drawdowns both slowed appreciably through 2018 and into early 2019.

As might be expected, a pullback in the pace of growth of ‘effective demand’—the number of potential buyers able and willing to buy at current prices—has translated into a notable easing in house price inflation. Importantly, however, since the spring of 2019, the trend in both the number of mortgage purchase drawdowns and average loan size has stabilised and begun to edge higher suggesting effective demand growth is no longer bearing down on house price growth. 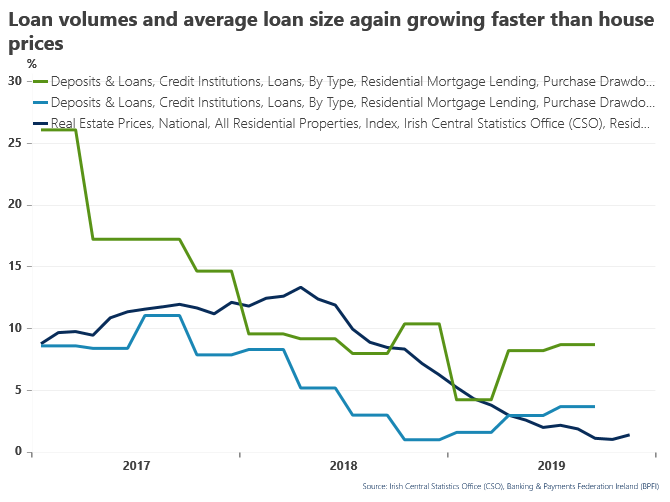 Irish house prices are tied to the heat of the economy

Ultimately, the trend in Irish house prices is closely related to developments in the broader Irish economy. As diagram 3 below indicates, the contours of house price growth have followed very similar patterns to Irish economic grow through the past fifty years. Over that period, average annual house price growth at 8.6% has run marginally behind money growth in the economy (as measured by modified GNI growth to avoid distortions related to multinational sector activities).

Through the past year, the possibility that the Irish economy might face a sharp and sudden deterioration as a result of a ‘no deal’ Brexit likely weighed on homebuyer sentiment and contributed to softer demand conditions. With the immediate threat of a ‘crash out’ removed but the inevitability of Brexit established, it may be that some element of pent-up demand re-emerges in some segments of the Irish property market both from domestic and overseas buyers. In circumstances where unemployment and average earning growth are both moving towards 4.5%, domestic economic prospects may be more supportive of the Irish housing market as 2020 progresses. 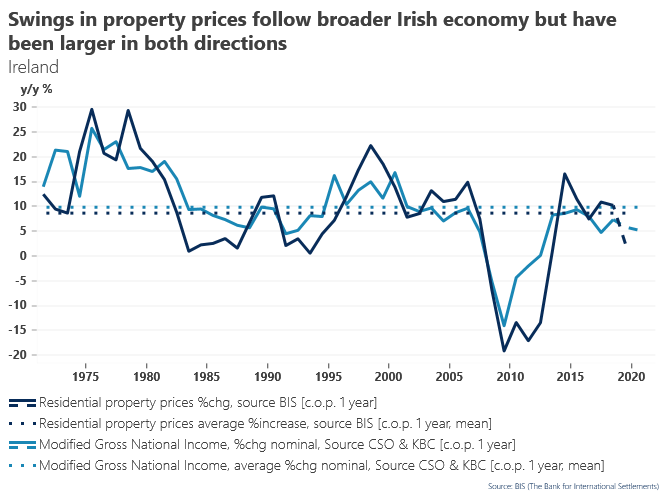