Growth in consumer spending and construction ease but still healthy

Growth data for the third quarter of 2018 suggest that the Irish economy is continuing to post solid gains in activity although the pace of growth appears to be moderating. While volatility in these figures remains an issue and urges caution in terms of full year outcomes, overall, we are of the view that today’s release is consistent with our forecast of GDP growth of 7% in 2018 ( although we have tweaked the components somewhat).

We also think signs of a slight easing in domestic demand growth hints at a notably slower if still solid 3.5% increase in GDP in 2019-provided a ‘no deal’ Brexit is avoided (see below). 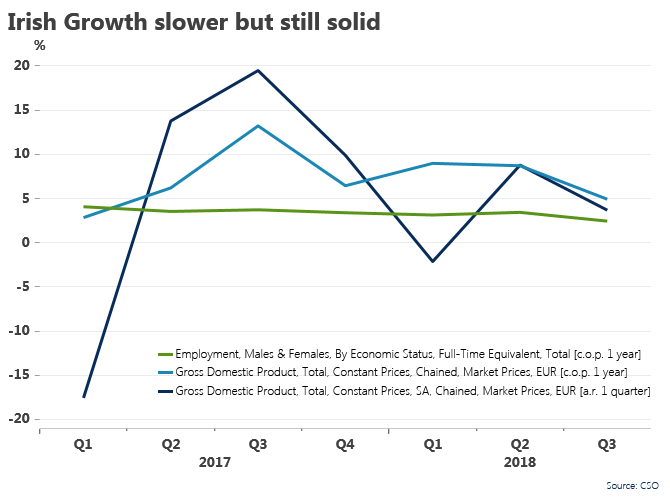 Among the key aspects of today’s data are the following:

Today’s data show some signs of a slight moderation in household and domestic business spending growth in the third quarter that is broadly consistent with a pull-back in consumer and business sentiment of late that hints at a more cautious approach to spending in late 2018. Our sense is that increasing uncertainty about the  path (or cliff) that the UK will take in 2019 could prompt a ‘‘Brexmas’’ related softening of the pace of growth over the turn of the year.

In the event of an orderly and managed separation, there could be some temporary ‘relief rally’ impact on activity in early 2019. Alternatively, if the UK were to ‘crash out’ of the EU next March without a transition deal or some significant agreement on trading relations, it would impart a sudden and severe shock on the Irish economy. As the disruptive effects would be front-loaded into 2019, next year would bear much of the burden of adjustment and, consequently, much of the hit to activity and employment in the event of a ‘no deal’ scenario.

The unprecedented nature of Brexit makes any attempt to quantify the likely damage to the Irish economy highly speculative. The sharp contrast between recent estimates of ‘no deal’ outcome effects on the Irish and UK economies from the ESRI and the Bank of England illustrates this forcefully. Unfortunately, it is near impossible to capture the disruption to sentiment and spending of the likely chaos that would ensue in model-based estimates. Indeed, it could be argued as is suggested in the Bank of England analysis that the short run hit would exceed the long term impact.

Moreover, to the extent that Irish GDP metrics may exaggerate the level of output and incomes affecting most businesses and households, estimated Brexit effects on GDP may not fully capture the nature or extent of dislocation felt by many domestic firms and consumers. Nearly as important as the summary impact on the Irish economy as a whole is the large variation in outcomes that will be felt across sectors and regions.

Our strong view is that the short term impact of Brexit outcomes on the Irish economy will vary hugely depending on the specific path chosen by the UKand the resultant actions policy taken in Ireland or at the EU level. Even with some offsetting policy measures, we would expect the adverse impact of a ‘no deal’ outcome to be a significant multiple of that of a more orderly separation. Our tentative estimates in this regard suggest that Irish GDP growth for 2019 could be reduced by between 2 and 3 percentage points in the event of a ‘disorderly’ Brexit.

A more structured and correspondingly slower Brexit might shave a good deal less than 1 percentage point of the near term growth outlook. Our sense is that the latter would reflect both a precautionary slowing of business and household spending as well as some alteration to supply chains and poorer prospects for exports to the UK. This sort of impact entailing a soft but not entirely smooth Brexit is envisaged in our forecast GDP growth figure for 2019 of 3.5%.

Back to the future?

The schizophrenic nature of much economic commentary and analysis is hinted at in the coincidence at present of widespread concerns regarding the risks posed by Brexit and a notable focus on ‘the return off the boom’.

In these circumstances (having discussed Brexit risks), we thought it might be instructive in light of the new GDP data to compare recent economic developments to those of the ‘Celtic Tiger’ era.  This comparison is complicated by data shortcomings with quarterly figures for our chosen metrics only available back to 1999. We have chosen that year as our reference period partly for data reasons but also because it marks the beginning of EMU and the transition to a markedly lower interest rate regime that was central to the acceleration in domestic spending that characterised the boom.

As diagram 2 illustrates, there are major differences in the paths taken by various indicators that mean on some measures, current conditions are comparable to the previous boom but others are showing a notably poorer trajectory. In brief, as diagram x illustrates, the boom is back for some but for many, particularly for those not gaining employment,   recovery is still a work in progress. As the diagram shows: