Growth data for the final quarter of 2014 and accompanying preliminary estimates for the full year paint a very encouraging picture of the Irish economy. Last year saw domestic demand increase for the first time since 2007 and exports grow at the fastest rate since 2000. So, recovery is now clearly broadening and strengthening. Irish GDP grew by 0.2% in the final three months of 2014 and by 4.8% for the year as a whole. These growth rates were restrained by an unusually large increase in imports in the final quarter, which we discuss in more detail below. 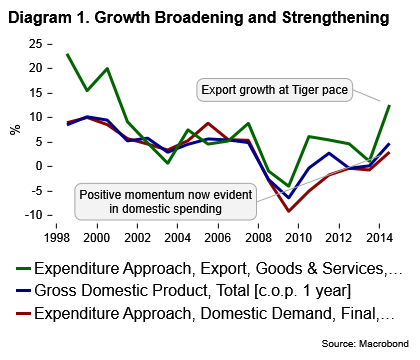 The strong underlying momentum in today’s data augurs well for 2015 growth. In addition, Irish exports are now supported by the sharp weakening in the exchange rateof the Euro and domestic activity is benefiting from a modest budget injection of spending power as well as improving business and consumer sentiment. As a result, we have upgraded our forecast for GDP growth for 2015 from 3.5% to 4% (see details below).

Irish GDP growth in the final quarter of 2014 at 0.2% was somewhat lower than we expected but the details suggest the Irish economy is building significant forward momentum.  Consumer spending rose by 1.3% in the quarter, the fastest pace in almost four years while investment spending also improved, albeit at a notably more modest rate (+0.7%) than in the previous couple of quarters. Export growth also slowed somewhat (+1.2%) but with full year export growth at 12.6%, some deceleration of late was near inevitable.

The slightly disappointing headline GDP growth number for the fourth quarter reflects the impact of an exceptional 5.4% jump in imports. This was the third fastest quarterly increase in the past eleven years. While some step up in imports is likely as recovery takes hold, our sense is that the long term trend of broadly similar average quarterly changes in exports and imports is unlikely to alter dramatically. It may be recalled that preliminary imports data for the final quarter of 2013 also showed an outsized increase of 5.8% which resulted in an initial GDP estimate for 2013 of -0.2%. The CSO now estimates import growth was just 0.3% in the final three months of 2013 and puts GDP growth in 2013 at +0.2%.

The step-up in imports in late 2014 also coincided with an unexpected fall in net factor income outflows meaning thatGNP growth in 2014 was somewhat stronger than we envisaged at 5.2%. Sharp fluctuations in imports of services and Net Factor flows that substantially increase the volatility in quarterly Irish growth data are an inevitable consequence of the scale of the multinational sector and changes therein. While they caution against a spurious precision in relation to Irish growth rates, they shouldn’t obscure the very real improvement in macroeconomic conditions in Ireland of late.

Today’s data imply that Ireland’s General Government deficit was 3.7% of GDP in 2014, comfortably beating the ECOFIN target of 5.1%. Our sense is that the improvement emerging in domestic demand and already reflected in strong exchequer returns for the first two months of the yearis likely to translate into a deficit in 2015 below the original budget day estimate of 2.7% of GDP. Our very tentative estimate at this point is for a deficit of close to 2% of GDP this year.

Today’s growth data also emphasise the sustainability of the debt arithmetic. Irish GDP increased in nominal terms by 6.1% in 2014 and should grow by around 5% in 2015. With 10-year Irish Government bonds yielding about 0.71% today, the capacity for the Irish economy to outgrow is a still significant fiscal debt problems looks altogether less daunting than a couple of years ago.

Today’s data also show Ireland recorded a current account surplus on the balance of payments of 6.2% of GDP in 2014.  With the Government deficit estimated at 3.7% of GDP, this suggests the persistence of a substantial surplus in private sector savings that reflects a strong pace of domestic deleveraging.