Irish residential property prices improved in October and continue to show little sign of any marked negative impact from the pandemic. Property prices increased a material 0.5% between September and October. As a result, housing prices were 0.4% lower in October than a year earlier, a modest but noteworthy improvement in the annual rate from the 0.8% decline reported for September. 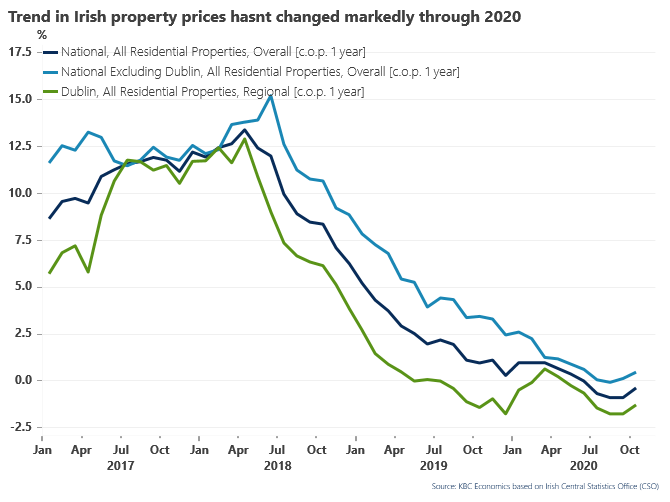 As has been the case since early 2018 (and illustrated by the diagram above), the trend in Dublin property prices remains somewhat softer than that outside the capital. The 1.2% y/y decline in Dublin property prices continues a negative trend in the annual rate in place since mid-2019 but, as the diagram below illustrates, there has been no further marked change in trend through 2020.Indeed, at the margin, there are tentative signs that a slight weakening through the spring has been reversed of late. In the same vein, October saw a small pick-up in property prices and the annual inflation rate across the rest of Ireland.

While the months over end-year typically see some ‘seasonal’ easing in Irish house prices and this pattern may be repeated in upcoming data, the tentative evidence from the October house price data is that the initial impacts of Covid-19 have been weathered with very limited negative effects on property values.

A notable feature of today’s release is a continuing pick-up in homebuying activity following a severe drop in transactions in the spring. Preliminary figures suggest home sales in October were still clearly below the levels seen a year earlier but the pace of decline has progressively eased to just -13% in October from -46% in May when the first ‘lockdown’ dramatically curtailed the capacity to complete transactions. 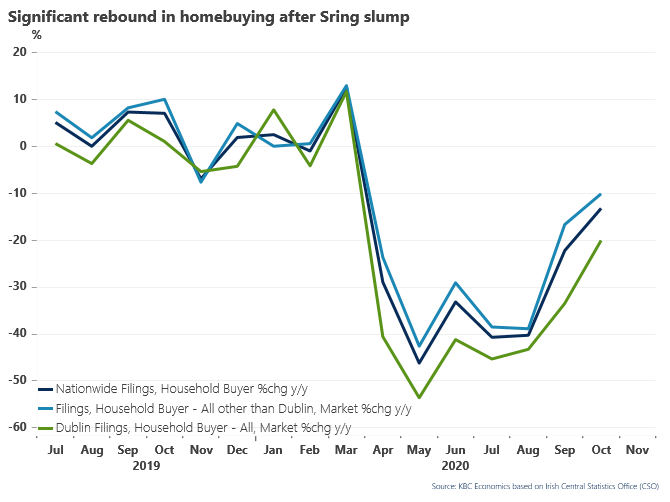 Irish property prices have been notably more resilient through 2020 than we feared might follow from the scale of economic dislocation caused by Covid-19. In part, this is a reflection of an international trend with UK data released earlier today showing a 5.4% y/y increase in UK housing prices in October (up from a 4.3% increase in September). This outcome likely highlights the uneven nature of fallout from the pandemic and also owes much to the expectation that borrowing costs globally will remain lower for longer as well as a rapidly increased focus on the home’s function as a work space as well as a living space.

In the case of Ireland, the continuing shortfall in housing supply relative to demand has likely intensified the urgency of home-buying for some prospective purchasers and, in stark contrast to the previous downturn, estimates of ‘fair value’ do not suggest that, in aggregate, Irish housing prices are markedly out of kilter with their traditional ‘macro’ drivers.

In this context, as the diagram below illustrates, ECB estimates suggest that when the pandemic struck in the spring of 2020, Irish property values were slightly below the levels that various metrics might suggest. In this context, the contrast with more elevated property valuations across the Euro area as a whole effectively reverses the picture seen when the previous crisis hit. 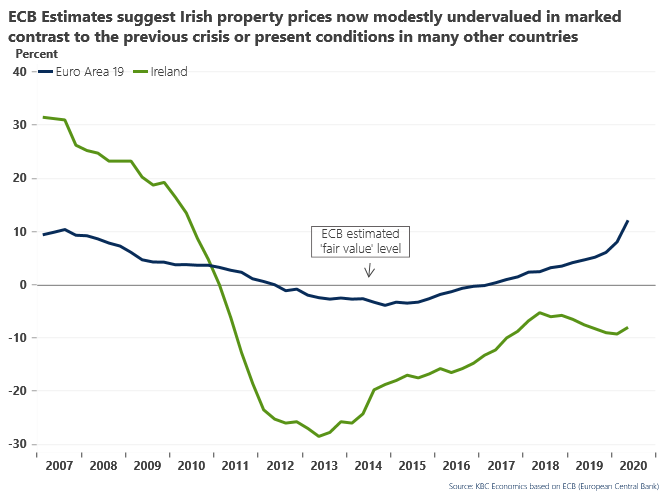 While such measures do not preclude significant price movements (as historic swings in valuation testify), this balance provides a measure of comfort that any adjustment of the Irish property market to the ‘next normal’ need not entail a catch-up element stemming from previous excesses.