On the basis of diagram 1, which shows the trend in GDP compared to that in employment, it might be suggested that things have returned to normal for the Irish economic growth story. Today’s official estimates show GDP growth of 0.6% in the second quarter of 2016 and which translates into a year-on-year increase of 4.1%. This seems broadly consistent with a range of other indicators that suggest the Irish economy is producing a rate of growth that is strong but not suspiciously so by historic standards. 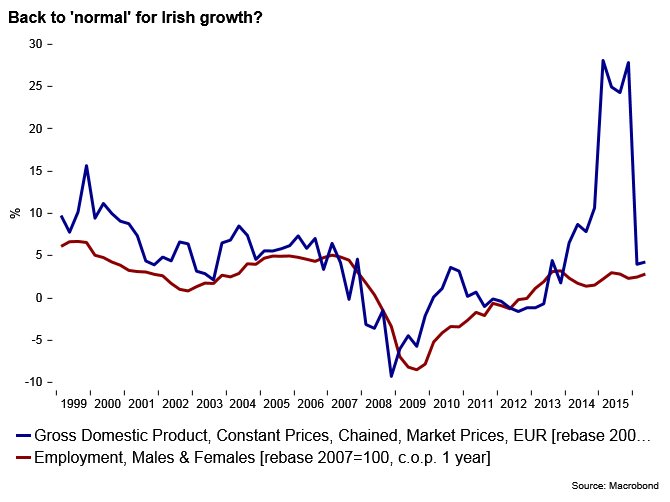 We think that a growth rate in the region of 4% is reasonably representative of conditions in the Irish economy at present but we would caution that the detail of the national accounts data continues to reflect the heavy influence of particular developments in the multinational sector that may not always mirror conditions right across the Irish economy.

The details of second quarter GDP suggest a somewhat disappointing trend in consumer spending (down 0.5% q/q) and exports (down 0.1% q/q) but all the ‘action’ in today’s data comes in the form of a sharp jump in purchases of intellectual property from abroad that meant investment grew an outsized 38.9% from the previous quarter. As this capital spending reflected purchases of intellectual property assets from abroad, it meant that there was a corresponding jump in imports of business services (see diagram 2 below) which in turn meant that this transaction had no net impact on Irish economic growth in the second quarter. 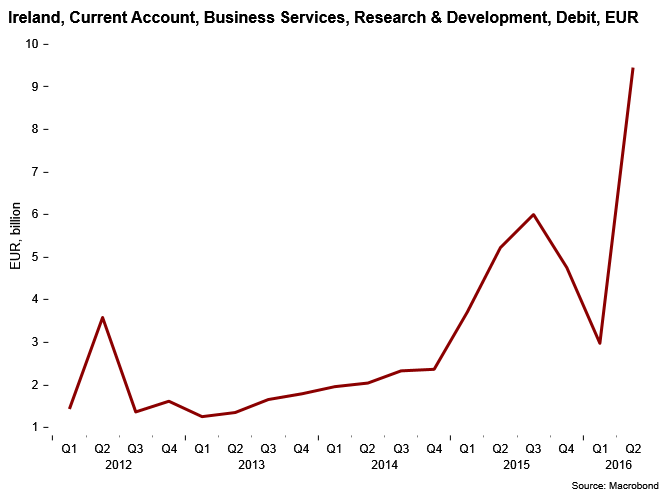 It is important to note that the intellectual property purchases that occurred in the second quarter represent a further acceleration in a trend that has been in place for some time. It should also be noted that according to the CSO more than one transaction and one company was involved in this Q2 activity.

These transactions are altogether different in scale and somewhat different in their associated treatment in the national accounts than the developments that led to the extraordinary 26.3% rise in Irish GDP in 2015 but they share some significant features.

The Q2 transactions also boost Ireland’s capital stock (in this instance by some €9bn rather than the €300bn in 2015) and thereby increase productive capacity as well as generating prospective gains in employment and corporation taxes.

Moreover, the influence of the OECD’S Base Erosion and Profit Shifting initiative and the likely impact of the Brexit process means this trend could remain a significant influence on real and measured Irish metrics for some time.

On balance, today’s national accounts data represent a continuation of the softer pace in annual growth seen in the previous quarter. As noted above, consumer spending softened relative to the first quarter which significantly reflects a changed seasonal pattern in car purchases since the introduction of six month registration plates. However, today’s data also indicate a slowing in the year on year rate of increase from 5.1% to 1.8%. As diagram 3, indicates, consumer sentiment did weaken slightly but jobs growth picked up. In addition, Budget 2016 added to household spending power while there was some modest improvement in wages. As a result, the sharp softening in the annual pace of growth in consumer spending  which was more pronounced than in previous years and is, to us, more than a little surprising.Our current view is that consumer spending growth should remain reasonably robust but today’s numbers imply upcoming indicators merit particular attention. 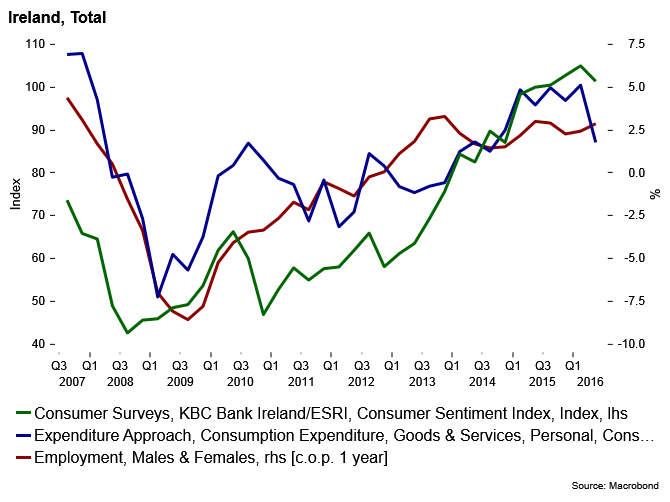 Some Problems With Prices

Another notable technical feature of the Q2 data is the measured weakness of both export and import prices. In theory, it might be expected that with lower oil prices, cheaper imports from the UK on foot of Sterling weakness and a multinational sector that in many instances is not a price taker that Ireland would have experienced terms of trade gains that would boost nominal GDP. However,  with export prices down somewhat faster in the past twelve months (-3.6%) than imports (-2.8%), the exceptional scale of the traded sector means that economy-wide prices, as measured by the GDP deflator, fell by 3.2%. The scale of the turnaround in these deflators is indicated in diagram 4 below.

This turnaround likely reflects company specific developments and a correction from the 2015 outturn to a significant degree. However, at the margin, there may also be some influence from sterling weakness that may reflect pressure on some domestic exporters. One consequence of the pullback in the GDP deflator is that Government fiscal ratios are affected in the in the same way that measured changes in ‘real’ growth influence those metrics. As a result, we have raised our 2016 budget deficit forecast marginally from 0.7% of GDP to 0.8% and our end 2016 debt to GDP ratio from 74.7% to 75.7%. 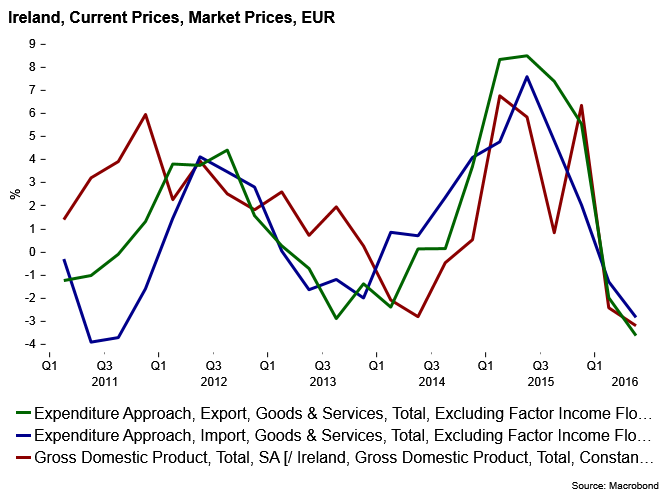 Reflecting both the new information in today’s data and the somewhat stronger momentum seen in recent jobs and migration numbers, we have revised our growth forecasts for 2016. We haven’t altered our overall GDP estimate for 2016 which was previously well below consensus at 4%. While today’s second quarter National accounts data alone might suggest the prospect of an outturn closer to 3.5%, we think other indicators point towards a somewhat stronger figure. However, today’s new information necessitates some offsetting amendments to forecasts for the various components of expenditure as the table below indicates.