Irish GDP growth rate of 7.8% overstates a strong performance in 2017

Exceptional momentum means headline growth in 2018 could be 6%

On all relevant metrics, the Irish economy has turned into 2018 with strong momentum. However, the preliminary official estimate of the increase in GDP of 7.8% Y/Y for 2017 is unlikely to accurately capture the scale of the improvement in activity relevant to most firms and households. Our best guess is that a more representative number for 2017 would lie in the region of 5%.

Whether one looks at a rise in full-time equivalent employment of 4% in 2017 and allows for some productivity gains or adds some improvement in underlying trade to a 4% increase in ’modified’ domestic demand (which excludes multinational related capital spend), we reckon the underlying growth rate for 2017 would emerge at about 5%, a still exceptional figure.

However, the gap between measured and meaningful metrics of Irish economic activity, as illustrated below, makes it very difficult to assess the precise current ‘speed’ of the Irish economy might be or to determine exactly what a sustainable speed might be.

It should be emphasised that the figures produced by the CSO follow best international practice to arrive at the appropriate measure of GDP. However, the point is that these numbers are hugely influenced by the outsized activities of a small number of multinational companies and, as such, don’t readily reflect the spread of conditions across the Irish economy as a whole. 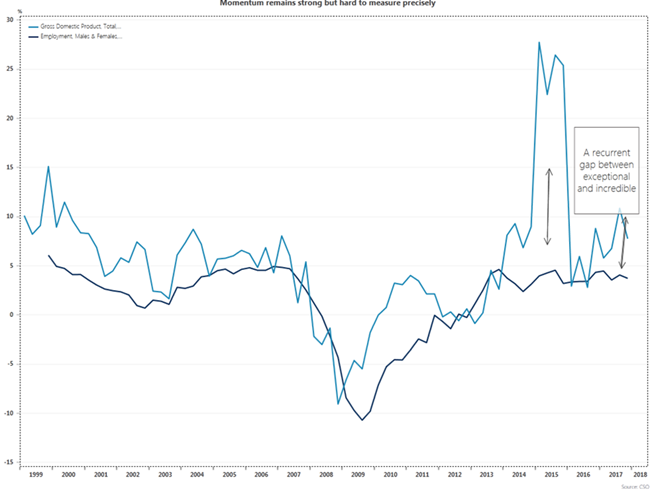 The recorded 7.8% rise in Irish GDP in 2017 is primarily driven by a strong 6.9% rise in exports. While part of this reflects the performance of indigenous exports, it is also boosted by ‘contract manufacturing ‘which entails exports produced in other countries on behalf of Irish designated companies.

The strength in exports contrasted with a 6.2% drop in imports. The impact on measured GDP of a sharp drop in imports is largely offset by a 22% fall in investment, with both of these declines primarily reflecting a fall-off in multinational company- specific spending on Intellectual property.

If one shifts focus to the elements of the National Accounts more generally reflective of domestic economic conditions, the official data present quite a mixed picture. Construction activity is surging, growing by 16.7%, with spending on dwellings up 32.6%. Government current spending on goods and services is up a surprisingly modest 1.8% in volume terms but perhaps the most surprising aspect is a rise in personal consumer spending of just 1.9%.

Growth in Irish consumer spending has consistently underperformed in the upturn but the recorded increase of 1.9% in 2017 represents a significant disappointment given that full time equivalent employment grew 4% last year. In part, this can be attributed to still modest growth in household incomes, a significant personal debt burden and a still uncertain economic outlook all of which combine to produce a cautious approach to spending.

In this respect, these results are broadly consistent with the message of the KBC bank/ESRI consumer sentiment that suggests consumers see an improvement that is slow rather than spectacular. However, we also think the consumer spending number may be understated for a variety of technical reasons.

One factor complicating the measurement of consumer spending is a Sterling related switch to the purchase of imported used cars and away from new (imported) cars. The former increased by 22k in2017 while the latter fell by just under 15k. As the CSO say overall spending on cars fell in 2017, our concern is that this drop may be capturing a price rather volume fall.

Similarly, the CSO  cite a drop in spending on communications but this could reflect a difficulty in separating price from volume changes in this area (the CSO report a flat trend in communications prices overall that goes against disinflationary international trends; the average drop in the Euro area was 1.5% in 2017). Finally, the consumer spending deflator for 2017 was 1.3% in a year in which Irish consumer price inflation was just 0.3%.

This gap is significantly influenced by the statistical treatment of imputed rents in national income accounting, resulting in a likely understatement of the effective purchasing power of Irish consumers. Overall, our sense is that the underlying increase in consumer spending in 2017 was probably closer to 3%.

While the quarterly growth in Irish GDP slowed marginally in the final quarter of 2017 from 4.8% previously to 3.2% in the final three months of 2017 (a still extraordinary 13.3% annualised rate), the momentum seen in these numbers implies that headline GDP growth in 2018 could be in the region of 6%. Our best guess is that the underlying rate of growth may be in the region of 4 to 5%.

Statistical issues aside, the reality is that the Irish economy has begun 2018 with a good deal more momentum than we previously envisaged.  While we had expected some headwinds from Brexit related concerns and an uncertain geopolitical environment globally, apart from some sector-specific difficulties, the Irish economy has not seen much Brexit related fall-out and even managed to move from a current account deficit into a surplus with the UK between 2016 and 2017.

Moreover, a stronger than expected global economy is now acting as a tailwind to Irish economic growth. With strong jobs growth supporting domestic spending there is scope for a further strong Irish economic performance in 2018.

We should also highlight the fact that a recorded 7.8% growth rate in 2017 would move the Irish economy further into positive output gap territory and could imply a need for a somewhat tighter fiscal stance in the upcoming budget.

However in tandem with yesterday’s jobs data, these figures underscore the need to avoid mechanistic interpretations of the Irish economy’s growth potential and to have a deeper debate as to what might be the appropriate domestic policy stance to deliver strong and sustained growth in coming years.