We hold to our previous forecast of a 5% GDP decline in 2020 and now see two-sided risks to this projection.

Downturn likely to be more painful in terms of jobs than GDP. So, stimulus package badly needed

Revised data show that, in terms of developments in GDP, the Irish economy was marginally stronger than previously estimated in 2019  and, importantly, still recording positive growth in the first quarter of 2020. This performance remains quite exceptional as the diagram below illustrates.

While the nature of the pandemic means a sharp downturn this year is likely to be notably more severe in the hit to jobs relative to that in GDP, today’s data are positive both in terms of what they directly say about the outlook for activity and what they imply may be affordable in terms of fiscal measures to limit the damage to employment. 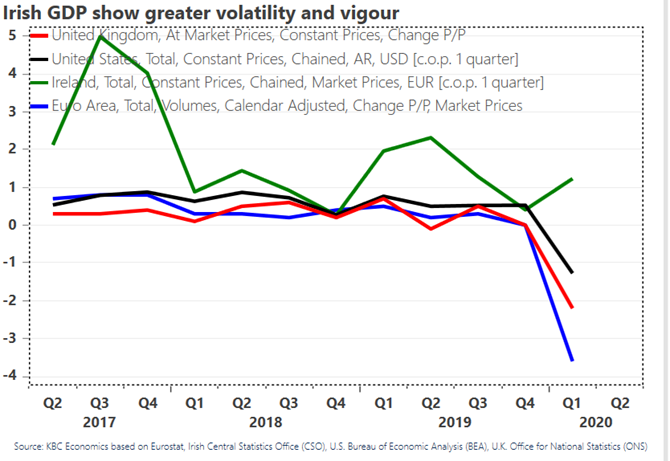 While the broad economic outlook remains very uncertain, today’s data suggest our previous above consensus forecast that Irish GDP could decline by about 5% in 2020 still appears broadly reasonable and, depending on the path of the virus through the remainder of the year, could possibly prove conservative.

Indeed, at the margin, a number of encouraging revisions to the details of the Q1 number from the preliminary release, coupled with the possibility of a material uplift if the imminent stimulus package is significant in terms of size, substance and signal, implies some possibility of an even smaller deterioration in terms of GDP this year.

Our longstanding assumption has been that a stimulus package would contribute meaningfully to an improving trend in GDP in the second half of 2020. Media reports suggest the possibility of measures amounting to 2-2.5% of GDP.

Given the scale of stimulus measures being enacted in other countries traditionally regarded as fiscally conservative, this seems far from ambitious and looks to be towards the very minimum level required to meaningfully alter the path of GDP and jobs into 2021. The significant amount of economic slack resulting from the Covid-19 hit to activity means that the return on carefully constructed measures could be notably greater than would traditionally be the case of expansionary fiscal policy.

Today’s revision to the 2019 outturn for economic growth is marginal and raises the estimated pace of GDP growth last year to 5.6% from 5.5%. While this marks the fourth upward adjustment from the preliminary figure in the past five years. The limited change might suggest difficulties in measuring the increased activities of the multinational sector are becoming less pronounced.

Importantly, the changed scale and nature of multinational activity has been reflected in stronger tax revenues and employment as well as notably stronger measured output. As the diagram below illustrates, the impact in terms of various measures of National income has been marked. This step-up in the size of the Irish economy in recent years has also been a central element in the arithmetic that looks set to result in Ireland receiving a very limited share of the European Recovery Fund. 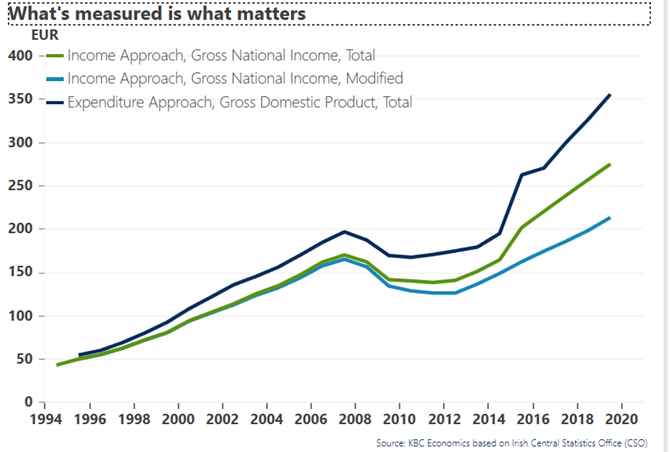 This stronger measured level of national income in recent years is taken to imply a correspondingly greater domestic financial capacity to handle the crisis and, by extension, implies a greater onus on domestic fiscal policy to bear the burden of offsetting the adverse impact of the pandemic on the Irish economy.

However, while Irish National Income sits well above the European average, Irish consumption per capita is below the EU average. So, the domestic economy and associated employment is notably more vulnerable in current circumstances than headline GDP data might suggest and this divergence underscores the importance of getting the stance of fiscal policy right.

Some encouraging signs in Q1 data

Today’s data suggest that the Irish economy began 2020 on a somewhat firmer footing than any other western economy.  Eurostat numbers  show that the quarterly increase in Irish GDP of 1.2% compared to an average decline across the EU of 3.2% (and was notably stronger than that seen in any of the other three countries reporting positive quarterly outturns; Bulgaria +0.3%, Romania+0.3% and Sweden+0.1%).

Today’s revised data show that while the overall increase in GDP was unchanged at 1.2% q/q, the details showed less pronounced weakness in consumer spending ( down 3.1% q/q against a previously estimated 4.7% drop) and a run-down and lower level of stocks than previously thought that may imply less of an overhang on growth later in the year.

A more substantial change in new Q1 data is a notably higher level of investment in Intellectual property that, while neutral in the very near term because of the associated boost to imports, should also further underpin output in the multinational sector as the year progresses.