Four of past five years see upgrades to growth. 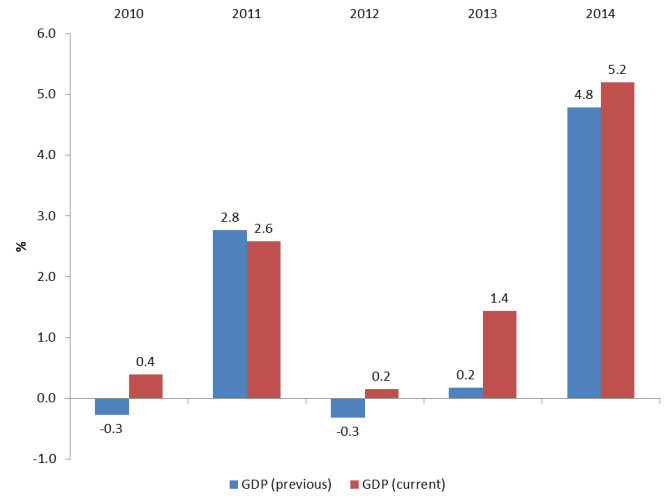 Data for the first three months of 2015 suggest momentum is continuing to build with a quarter on quarter growth rate of 1.4%, driven by strong increases in consumer spending (+1.2% q/q) and exports (+2.3%).  With a rundown of stocks subtracting about 1% off quarterly growth and what we see as a temporary pull-back in investment, the underlying pace of growth in early 2015 was probably a good deal stronger than the headline figure suggests.

These data reflect an Irish economy that is benefitting from a significant adjustment in domestic costs further amplified by a very weak Euro exchange rate that has enhanced the Irish economy’s competitiveness against the UK and US key trading partners and sources of FDI. Importantly, after a sequence of very tough Budgets that saw a cumulative adjustment of 19% of GDP, fiscal policy has begun to turn modestly supportive of domestic spending.

We now think GDP growth in 2015 is likely to be in the region of 5% (against our previous estimate of 4.5%) largely reflecting stronger consumer spending (+3% against +2.5%).  As first quarter GDP was 6.5% higher than a year earlier, our new forecast assumes a somewhat slower pace of growth over the reminder of the year that significantly reflects a somewhat weaker trend in a range of monthly data for the second quarter as well as a fairly cautious assessment of the remainder of the year on our part. We provisionally estimate 2016 GDP growth at 4.2% as the table below indicates.

Arguably as important as today’s upward revision of previous growth estimates is the composition of the revisions which show a notably stronger recent trend in personal consumer spending and in Government spending on current goods and services. The upward revision to consumer spending largely reflects stronger estimates of spending on services. This is consistent with the stronger than expected trajectory of tax revenues and the healthy trend in employment. This revision also suggests notably greater current momentum in domestic economic activity. 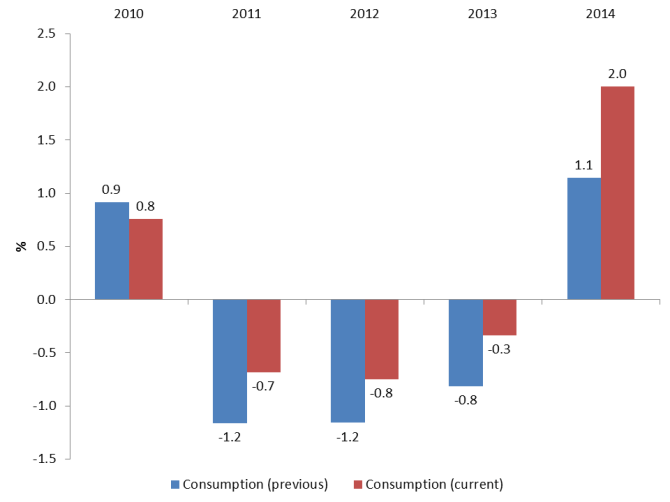 Today’s revisions result in marginal improvements in the Government deficit ratio for recent years and suggest the outturn for 2015 could be as low as 1.5% of GDP compared to an original target of 2.8% of GDP and the current official forecast of a deficit of 2.3% of GDP. In turn, the persistence of a strong domestic contribution to growth could readily deliver an outturn for the General Government Deficit of just under 1% of GDP.

P.S.  Yet another Irish statistical complication; while these data confirm the recovery in Irish economic conditions is strengthening and spreading, almost inevitably they contain significant statistical changes that may cloud the interpretation of the details. Today’s revisions include an adjustment that incorporates the inclusion of aircraft purchased by what is a very large international aviation leasing industry operating in Ireland. In most instances, these planes are registered and operated abroad. Previously, only planes registered in Ireland were included in imports. The effect of this change is to boost imports into Ireland significantly. However, these imported imports will also be counted as the purchase of a capital good. Hence, a sharp increase in Investment effectively offsets the rise in imports and there is no material impact on GDP (although the associated depreciation of the stock of aircraft does lower the recorded growth in net national income which is sometimes used as a growth measure).

The revised statistical treatment of aircraft accords with best international practice but it may significantly complicate analysis of the Irish economy. By raising imports and investment it implies higher levels of domestic demand and imports and notably more variability in the growth rates of these two aggregates. In the past year, it suggests a stronger contribution to Irish growth from domestic demand and a correspondingly weaker contribution from net exports than was probably the case. As Ireland’s measured capital stock is notably greater than previously estimated, it may also influence production function- based measures of potential growth.  In any event, the wider revisions to historic GDP data today mean we should be wary of a spurious precision when it comes to Irish economic aggregates. That said, taken in the round, today’s data emphasise the resilience of the Irish economy and suggest the prospect of sustained strong growth in coming years.