It’s usually impossible to summarise Irish weather conditions in one word and, similarly, there isn’t a single numerical measure that properly captures the complexity of Irish economic circumstances. In broad terms, however, the current situation is reasonably clear; new National Accounts data suggest the Irish economy has been on a stronger path than previously thought in recent years with growth in household spending healthier than earlier estimates suggested.

Positive momentum in Irish economic activity has carried into the first quarter of 2019 and suggests GDP growth this year could be around 5%, a good deal higher than our previous forecast of 3.5%. Indeed, Irish economic growth could possibly be even higher than that this year depending on how current uncertainties around Brexit and international trade tensions are resolved.

Today’s publication of the first detailed statistics on Irish economic growth performance in 2018 shows a significant upward revision to GDP growth to 8.2% from the preliminary estimate of 6.7% and a broadly similar uplift to the 2017 figure to 8.1% from 7.2% previously. However, there was a partly offsetting downward revision to the 2016 GDP growth figure to 3.7% from 5%.

These revisions testify to the ongoing difficulty in capturing the complexity of multinational activities in a manner that adequately represents their linkages to the rest of the economy. However, material upward (if not particularly surprising) revisions to consumer spending estimates for 2016 and 2017 also hint at broader difficulties in this regard. 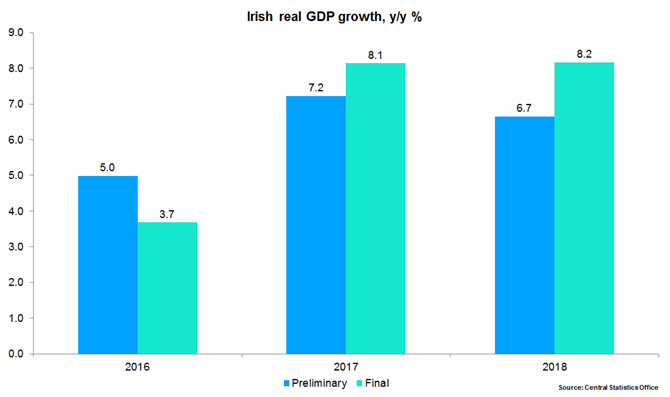 While we had previously suggested official estimates of consumer spending growth might have understated the true position, it is important to note that household spending is still increasing at a materially slower pace than household incomes or even the growth in employment. As a result, it appears that Irish consumers are still adopting a relatively cautious approach to spending that is consistent with the message of subdued consumer sentiment.

Encouragingly, growth data for the first quarter of 2019, in line with indications from recent employment figures, suggest that the Irish economy has remained on a strong trajectory in the early months of this year. The quarter on quarter increase in GDP of 2.4% (10.1% at an annualised rate) was underpinned by an acceleration in quarterly gains in consumer spending, government purchases of goods and services and housebuilding implying broadly based improvements in economic activity at the start of 2019.

Significantly, with household spending rising more slowly than incomes, public spending controlled and tax receipts growing solidly and housing output still some significant distance below natural demand, all these aggregates look to have scope to continue to support healthy rates of economy-wide growth.

While slowing global growth and particular risks around Brexit and global trade developments are likely to constrain Irish economic growth as 2019 progresses, this stronger starting point suggests we feel we need to upgrade our full year forecast for GDP growth from 3.5% to 5.0% reflecting healthier increases in consumer spending (+3.0% v +2.5%) as well as a larger contribution from net trade.

The faster growth dynamic of recent years revealed in today’s data might hint that the ‘safe speed limit’ for Irish economic growth may be somewhat higher than previously thought. The more rapid rise in output implies productivity growth has been somewhat larger of late than previously estimated. Today’s data show continued moderation in the deflators for household and current government spending suggesting price pressures remain muted in these areas. As such, they underscore the importance of focussing the policy debate ahead of Budget 2020 on supply-side measures that might support strong and sustainable gains in activity and employment rather than simply concentrate on curbing demand.