Irish GDP growth of 5.2% is strongest in EU for third year in a row

Today’s Irish economic growth data for the fourth quarter broadly confirm the strength of the recovery through 2016 but, in equal measure,  they again highlight the difficulties of using the conventional national accounts metrics as a barometer of the conditions facing most Irish households and businesses.

A 2.5% quarterly rise in GDP on the final three months of last year meant that for the year as a whole Irish GDP increased by 5.2%. This provisional outturn suggests Ireland had the strongest pace of economic growth in the EU for the third successive year (just edging out Malta whose preliminary data report a 5.1% gain).

A comparison of Ireland’s 5.2% GDP gain with increases of 1.8% in the UK, 1.7% in the Euro area and 1.6% in the US in 2016 highlights the robust nature of Ireland’s economic performance even if the GDP data somewhat exaggerate the underlying improvement across most areas of the Irish economy.

While we feel the 2016 estimates for GDP growth of 5.2% (and GNP of 9%) overstate the momentum in the Irish economy last year,  any divergence is altogether less marked than in 2015 (which saw GDP rise by 26.3% and GNP by 18.7%). Using last year’s rise in employment of 2.9% and a trend measure of productivity as a gauge of additional production in the Irish economy, we estimate underlying economic activity increased by about 4 to 4.5% in 2016.

The difficulties in reconciling headline GDP (or GNP) growth rates to underlying activity largely reflect the scale of multinational operations in the Irish economy and the changing structures of a very small number of these companies. In 2016 these activities translated into a 56.5% rise in capital spending on Intellectual Property and Machinery which we estimate to have been almost exclusively concentrated in the former category.

In the past, this surge would have been accompanied by an equally substantial increase in imports and while imports did grow sharply in 2016, the rate of increase of 10.3% is weaker than through the past couple of years.  It should be noted however, that this increase was sufficient along with a softer trend in merchandise exports to produce a sharp drop in the size of Ireland’s surplus on the current account of the balance of payments from 10.2% of GDP to 4.7% of GDP in 2016.

To the extent that prominent multinational companies base more of their operations in Ireland, this results in larger royalty earnings and lower imports of services than was the case when these operations located elsewhere. In turn, this boosts measured domestic activity and reduces the import intensity of measured GDP even if the feed-through of such operations to broader conditions in the Irish economy is relatively limited. For this reason and because of the potential for higher investment in 2016 to generate stronger output in the coming year, we have raised our forecast for Irish GDP growth for 2017 from 3% to 4% as indicated below.

While we have some misgivings about the extent to which metrics such as GDP map onto the circumstances of most Irish firms and consumers, some of the details of today’s release shed important light on the nature and extent of the upswing in the economy.

For example, the recorded rise in consumer spending of 3% in 2016 appears broadly consistent with circumstances in which numbers at work rose sharply but measures such as consumer sentiment suggested no marked improvement in the financial circumstances of many households.

In the same vein, a 27.9% increase in construction of new dwellings and an 11.1% rise in non- residential construction highlights the pace of recovery in the building industry but historic comparisons show overall activity in this sector is still just 56.5 % of its 2007 level and 18% below that of 2001.

More generally, today’s data imply the Irish economy turned the year with substantial forward momentum. Even allowing for some statistical issues that flatter these figures, upside surprises in these and other recent economic data such as recent jobs numbers provide a significant counterweight to the downside risks posed by Brexit and possible changes in US taxation policy. As such, they should encourage expectations of a relatively solid performance in the year ahead and this is evident in our new forecast even if we still envisage a clear slowdown in the pace of GDP growth relative to 2016. 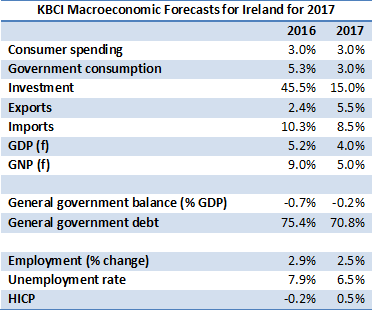