GDP data for the third quarter suggest the Irish economy is continuing to build momentum and is now growing at a pace last seen in the heady days of the ‘Celtic Tiger’. We now expect GDP growth to average 7.2% in 2015, the strongest out-turn since the 10.2% rate recorded in the year 2000.Next year should see some easing in growth to a still rapid 4.5% pace.

It is worth putting these numbers in a global context. Ireland will not be the fastest growing economy in the world in 2015. The latest IMF outlook suggests that honour is likely to fall to Papua New Guinea (+12.3%), followed by Ethiopia (+8.7%) or perhaps Myanmar or Turkmenistan (both +8.5%). But the Irish performance is exceptional in relation to advanced economies, with IMF estimates suggesting the next strongest performance will be Iceland (+4.8%). Within the EU, Ireland will be followed by Luxembourg (+4.4%). The Euro area as a whole is seen growing by 1.5% while the US and UK are both expected to post growth of around 2.5%. So, Ireland’s performance is clearly an outlier.

We think three distinct sets of factors; fortuitous, fiscal and fundamental explain Ireland’s out-sized growth in 2015. The first set reflects a particularly favourable set of external circumstances encompassing (1) comparatively healthy conditions in the UK and US that are supporting exports from and FDI into Ireland, (2) low borrowing costs and a weak Euro exchange rate stemming from the sluggish performance of the single currency zone and finally, (3) the sharp drop in oil prices.

Of these, the first two elements are well understood but we think the impact of low energy costs may not attract the attention it deserves. As diagram 1 below indicates, swings in oil prices have in the past been associated with significant changes in Irish economic performance. The drop in oil prices in the mid-80’s coincided with the start of the upturn that became the ‘Celtic Tiger while the upward leg of a ‘super-cycle’ likely played some role in the intensity of the recent downturn. With net oil imports amounting to some 2.2% of Irish GDP, a roughly 35% drop in average oil prices in Euro terms this year represents a significant boost to Irish economic activity when both direct and indirect effects are considered. 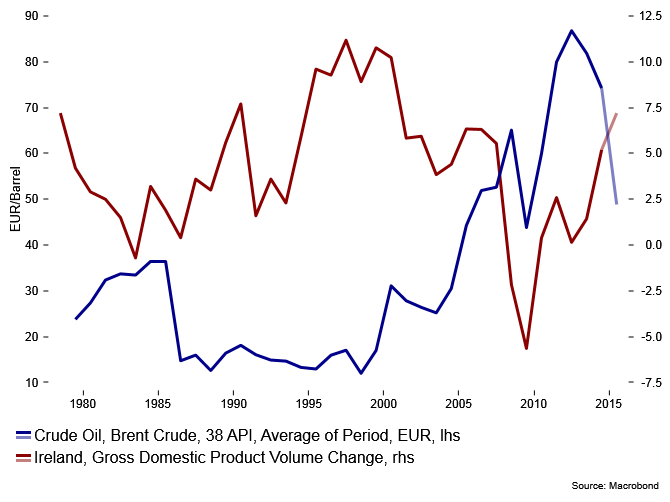 A second important influence on the Irish economy in 2015 is a marked change in the stance of fiscal policy. Measures in Budget 2014 entailed cuts in public spending and increases in taxes amounting to some 1.3% of GDP. This would have weighed on activity in 2014. However, Budget measures are significantly supportive in 2015. Including supplementary measures, we reckon fiscal measures totalling some 1.2% of GDP will boost activity this year. Beyond the mechanical impact of this turnaround, the sense that the era of austerity has now ended and fiscal policy will support rather than subtract from domestic spending power will act to underpin sentiment and spending by households and businesses.

A final set of influences on the Irish economy in 2015 are more fundamental in nature. Domestic demand is now recovering after a 20% peak to trough drop in the downturn. With confidence returning, pent-up demand for consumer durables is emerging and being further boosted  by jobs growth of close to 3% this year and exceptionally low inflation--separate consumer price figures for November released today suggest that on the harmonised EU measure Irish inflation will be zero for 2015 as a whole. As a result, we see consumer spending growing by over 3% both this year and next.

Coupled with significant slack in the Irish economy and a comparatively strong potential growth rate, this implies scope for relatively strong growth to be sustained for the next few years (we also feel this slack and the importance of signalling an end to austerity mean the fiscal stance in 2016 can be justified, particularly as EU rules limit the risk of excessive largesse in coming years).

As the influence of some of the exceptional factors generating growth of around 7.2% in 2015 eases, we see GDP growth of about 4.5% in 2016 but we think risks to this estimate lie to the upside.  Our detailed forecasts are set out in the table below. 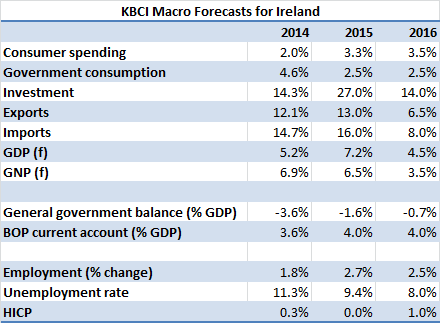 Alongside strong jobs data and a cumulative increase in tax revenues of 10% in the first eleven months of 2015, these growth data paint a fairly consistent picture of an Irish economy in rapid recovery mode. As usual, the details of the national accounts data, throw up a range of statistical issues that make it more difficult to establish the precise contribution of various sectors. So, for example, exports in the third quarter were boosted by sales of exports by leasing companies based here but this also weighed on investment. Similarly, further patent purchases raised imports but also increased investment meaning there was no net impact on GDP growth but there was a notable impact on its components.

For the first three quarters of 2015, the year-on-year growth rate is running at 7%. Our forecasts for the full year of 2015 assumes some increase in imports in the final quarter, but this should be significantly offset by additional public spending and a re-invigorated Irish consumer, meaning GDP should grow by around 7.2% for the year as a whole.

On balance, the picture is clear. Consumer spending is picking up notably while out-sized export growth is continuing.  With house-building up just 11.3% and overall construction up just 0.9% in the third quarter of 2015 from a year earlier, these data also underline the supply issues that continue to underpin rapid property price inflation. The robust health of the multinational sector is seen not only in exports but in the associated buoyancy of imports and net factor flows. So, it would seem the Irish economy is firing on nearly all cylinders as 2015 draws to an end.