The global backdrop remains uncertain but is less immediately threatening

The Irish economy remains on a positive path

Notwithstanding ongoing uncertainty and nervousness about Brexit as well as a more generalised weakening of global growth, the latest available indicators continue to suggest the Irish economy continued to have solid momentum through 2019. GDP data for the third quarter show a substantial 1.7% increase on the preceding three months and a gain of 5% compared to a year earlier. For the first three quarters of 2019 the cumulative increase in GDP is 5.9%.

The momentum in activity of late coupled with much reduced near term risk on Brexit means that for 2019 as a whole we now expect that Irish GDP will increase by about 6% (up from 5% previously). While this represents a clear slowdown from the headline growth figure of 8.2% for 2018, it reflects sustained strength in exports and an ongoing improvement in domestic spending.

Growth is broadly based

The details of the Q3 data show broadly based increases that suggest the Irish economy is firing on all the main ‘macro’ cylinders at present even if the intensity of gains varies significantly on a sectoral and geographic basis. In this context, final modified domestic demand is up a cumulative 2.4% thus far in 2019, suggesting as the diagram below illustrates that the domestic economy is making decent gains but not growing at a pace that would suggest broadly based overheating problems. 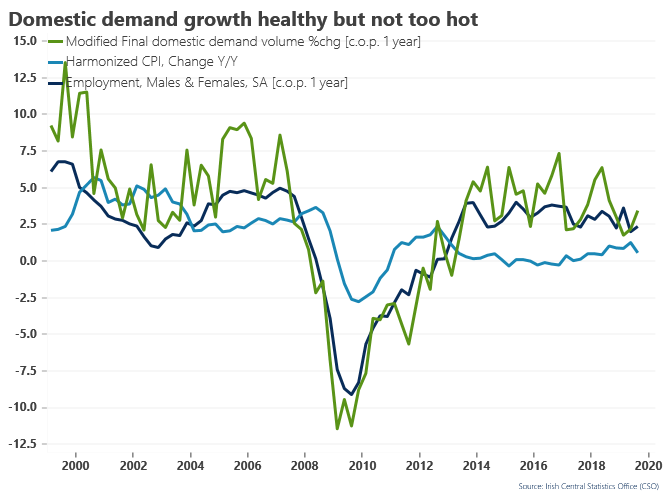 Consumer spending rose 0.9% on the quarter to stand 3.3% higher than a year ago. Unusually the Central Statistics Office has also revised up growth rates for earlier quarters, largely it would appear as a result of statistical adjustments to the volume/price split. The new data suggest  rising numbers living and working in Ireland alongside a clear pick-up in wage growth are more than offsetting the effect of weaker consumer confidence.

Construction spending increased by a healthy 1.5% q/q to stand 2.8% higher than a year earlier. Both gains were concentrated in new housebuilding but weakness in the growth rate in other aspects partly reflects the lumpy nature of large scale construction projects.

Exports not troubled by global slowdown

Irish exports were 2.4% higher in the third quarter than in the previous three months which translates into an increase of 11.1% y/y. The resilience of Irish exports in the face of a challenging global backdrop is worth exploring in a little detail.

Clearly, the open nature of the Irish economy means this challenging international outlook will act as  a restraining factor on Irish economic growth. However, the areas of the world economy seeing most difficulty at present such as manufacturing and the car industry in particular which have translated into notable adjustments in the outlook for Asian economies and, closer to home, the German economy are not those most central to Irish growth prospects meaning that Ireland is not seeing as forceful a direct restraint on growth as might otherwise be the case.

Arguably, the focus of Irish exports on less cyclically sensitive areas such as pharma, ICT and medical devices lessens the strength of links to broader global conditions and emphasises sector and company specific factors ( that make ‘macro’ forecasting altogether more difficult. That said, Irish exports  may get some support from the emerging prospect of progress in US-China trade talks that should reduce the threat of a marked slowdown in world trade into 2020.

The most immediate external issue facing the Irish economy is, as it was twelve months ago, Brexit. The still unfinished and tortuous process of agreeing and implementing a withdrawal agreement as a preliminary step in concluding a more comprehensive agreement about the future relationship between the UK and EU suggests the Brexit process has still scope to cast a substantial shadow over Irish growth prospects as 2020 progresses. However, the outcome of the December 12th general election in the UK removes virtually all uncertainty about near term developments in relation to Brexit and suggests the possibility of a short term ‘Brexit bounce’ in Irish consumer spending and some exchange rate assisted support for Irish exports to the UK.

While near term uncertainty has all but disappeared, more fundamental issues around the precise form of any eventual deal and, more importantly, whether it is feasible to reach a comprehensive agreement by the end of next year will likely translate into bouts of uncertainty through much of 2020. Significantly, this suggests renewed concerns about the risk of the UK ‘crashing out’ of the EU could return at one or more points during the year ahead with immediate and likely material impacts on economic sentiment in the UK and Irish economies.

The sort of deal now envisaged is materially better than ‘no deal’ but substantial costs related to customs documentation and various other non-tariff barriers imply a material weakening of UK linkages with the EU that translate into weaker economic prospects on both sides of the Irish sea. Importantly, however, if a trade deal is agreed and a ‘crash out’ Brexit avoided, this deterioration may take the form of a later but lasting step-down in the pace of growth on both sides of the Irish sea rather than a sharp and sudden collapse in activity.

Steady as she goes?

Encouraging developments in the shape of sustained strength in the Irish economy through 2019 and reduced near term risks around Brexit and global trade suggest Irish GDP growth should be in the region of 6% in 2019 and 4% in 2020 (rather than our previous estimate of 3%).

The growth rate envisaged for Ireland for 2020 is more than three times the prospective growth rate in the Euro area or UK.  This scale of outperformance reflects a range of supportive influence including Strong multinational performance, the switch to a more expansionary fiscal policy in recent years, low interest rates and favourable demographics all of which are now contributing to a strong but uneven recovery in activity, employment and incomes.

Significantly, this upgrade of growth forecasts is coming against a backdrop of subdued inflation. The GDP deflator for the first three quarters of 2019 is up just 0.8% echoing the evidence of  consumer prices which are up just 0.9% in the first eleven months and October data show house prices rising just 0.9%. Importantly, the 2.4% increase in ‘domestic activity’ as measured by final modified domestic demand suggests many parts of the Irish economy may have scope to speed up rather than slow down in 2020. 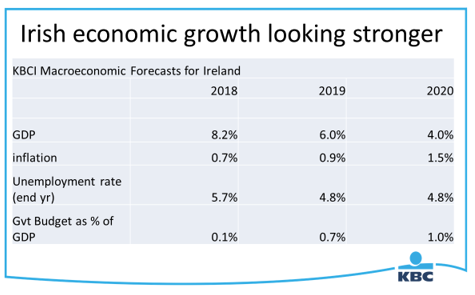