Irish consumer sentiment edged lower in February but this largely reflected a reversal of the seasonal jump seen in the January reading. Overall, the February survey suggests that the typical Irish consumer is still cautiously positive in their outlook but they remain apprehensive about potential threats to the economy and jobs in the coming year.

Since reaching a fifteen year high a year ago in the February 2016 reading, Irish consumer sentiment has struggled to retain forward momentum and has edged slightly lower through the past twelve months. From the perspective of the typical consumer, things have clearly stopped getting worse but they are not getting dramatically better. Consumers sense some improvement in the broader economy but are also aware of notable risks to economic prospects. Most have not seen a clear improvement in their own financial circumstances but many expect this to materialise in 2017.

Diagram 1 below, which shows both the monthly sentiment figure and the three month moving average, suggests a recovery in sentiment has occurred in recent years as the Irish economy improved but the economic upswing overpromised and under-delivered relative to consumer expectations in 2016.

Probably the most notable feature of the survey over the past twelve months is that it has only moved in the same direction in two successive months on one occasion (falling in both September and October).  A  ‘one step forward, one step back’ economic  environment continues to produce very choppy sentiment readings that reflect the difficulties consumers have in making sense of both their current circumstances and their economic and financial prospects. 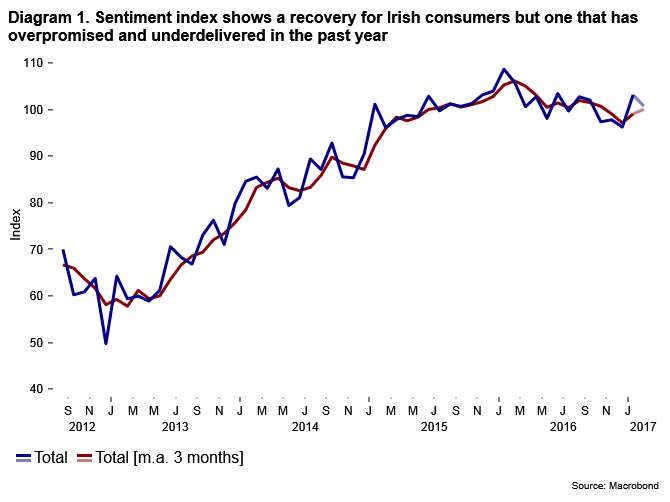 In the same way that we argued the rise in the sentiment index in January largely reflected seasonal forces, we would also downplay the significance of the drop in the index for February. The details suggest a little more concern about job prospects of late but there was also an encouraging improvement in consumers’ expectations for their own household finances that may hint at improving trends in spending power.

The KBC Bank Ireland/ESRI consumer sentiment index declined to 100.7 in February, a 2.4 point drop that followed a 7.2 point gain in January. As such, last month’s reading implies that Irish consumers are marginally more confident in early 2017 than they were in the latter stages of 2016 when there was a clear scaling back of optimism about the economy and household finances.

This modest and still tentative change in recent sentiment readings may reflect the fact that high profile risks to the economic outlook have not as yet translated into a poorer financial reality for Irish consumers in early 2017. Viewed in this way, survey results for the past two months might be regarded as a ‘relief rally’ as Irish consumers attempt to make sense of a broadening recovery and major risks to its persistence.

The drop seen in Irish consumer sentiment in February mirrored declines in similar metrics in a range of other countries. In the US, there was a small pullback in consumer sentiment from the thirteen year high recorded in January while Euro area consumer confidence weakened after improvements in each of the five previous months. In the UK, consumer confidence weakened modestly after similarly moderate gains in the two preceding months. The commonality of weaker confidence readings across countries in February likely reflects the importance of seasonal influences and the impact of ongoing uncertainty about global economic prospects together with more palpable hits to spending power of late from firmer oil and food prices.

Four of the five main elements of the Irish consumer sentiment index weakened month-on-month in February. The decline in Irish consumers’ assessments of the broad economic outlook facing them was relatively small but it continues a clearly more uncertain tone in recent months presumably driven by the threats posed by Brexit and possible changes to US tax policy.

There was a clear weakening of consumer thinking on the outlook for jobs in the February data. High profile labour disputes in a number of public sector areas probably informed this change but the announcement of substantial job losses as a result of the planned closure of HP’s print business in Leixlip may have been a more important driver of this result.

Irish consumers were slightly more negative in February in relation to trends in their household finances through the past twelve months.  This probably owes something to the arrival of post-Christmas bills as well as the rising trend in food and oil prices of late. With only 23% of consumers indicating an improvement in their financial circumstances in the past year and a broadly similar number signalling a deterioration, it remains the case that the majority of Irish consumers do not feel their own financial circumstances are improving in a manner that would allow a broadly based ‘feel-good factor’ take hold.

Continuing pressures on household finances amplified by Christmas spending also led to a pull-back in spending intentions in February. While much of this might be attributed to seasonal influences, this result appears entirely consistent with the softer trend in car sales of late. As such, it might hint at a more cautious approach to spending because of significant risks to the economic outlook.

The one area of the survey that saw an improvement compared to January was in consumers’ expectations for their personal financial circumstances in the next twelve months. This was a slightly surprising outcome in light of other elements of the survey but it could be related to a range of reports suggesting improved prospects for pay increases in the coming year.  It may also reflect wealth effects from stronger property prices and improved global equity markets of late.

With 31% of consumers anticipating improved financial circumstances compared to 12% who envisage a deterioration, these responses provide some support for expectations of a rise in Irish consumer spending in 2017 notwithstanding the constraints implied by other elements of the February sentiment survey. The contrasting signals of various elements of the February data also emphasise the countervailing factors influencing Irish consumer behaviour at present which is leading to a recovery characterised by its uneven and inconsistent nature.