• So spending likely to remain subdued.

Irish consumer sentiment weakened in February 2013. The KBC Bank Ireland/ ESRI Consumer Sentiment Index slipped back to 59.4 from the four month high record in January. Monthly changes have been volatile recently but a decline in the three month moving average from 59.3 to 57.8 suggests there has been some weakening in the underlying trend in consumer sentiment of late.

The Irish consumer remains in a difficult place. Pressure on household finances is significant and there is considerable uncertainty about the current trajectory of the Irish economy even if there have been some encouraging developments of late. In these circumstances, there is little likelihood that a pronounced ‘feel good’ factor will develop anytime soon. However, Irish consumers may gradually become more attuned to positive economic news and the ‘fear factor’ should gradually decrease provided there are no renewed setbacks to the global economy. In these circumstances, an extended and uneven turnaround in Irish consumer sentiment and in household spending is about all that can reasonably be expected.

The drop in Irish consumer sentiment in February contrasted with moderately better confidence readings in many other countries. The comparable US measure, compiled by the University of Michigan, showed a larger than expected improvement to 77.0 from 73.8. It would appear that positive labour market developments have outweighed the impact of higher income taxes but with the impact of sequestration on Public Spending now starting to be felt, it may be wise to suspend judgement on the mood of the US consumer for another month or two. There was marginal improvement in Euro area consumer confidence last month where slight gains in most countries contrasted with a markedly poor Dutch reading on concerns about a deterioration in that economy’s performance, particularly in regard to unemployment and house prices. In keeping with a month of relatively modest changes in most countries, UK consumer confidence held stable at levels slightly above the average of the past couple of years. Against this backdrop, it would seem the weaker Irish reading last month seems to largely reflects domestic influences.

The deterioration in Irish consumer sentiment in February was broadly based with all five elements of the survey posting weaker readings than in January. As all five readings had posted (notable) gains in January compared to December, it would appear that the weakening in sentiment in February at least partly reflects a correction to an outsized rise in the index a month ago.

Job Concerns To The Fore

The largest drop in sentiment was seen in relation to the outlook for jobs. It should be noted that this was also the strongest element of the January results when the best reading since June 2007 was reported. So, last month’s decline likely reflects a correction of an excessively strong January number. More generally, the volatility in the sentiment survey probably reflects the uneven nature of the turnaround in Ireland’s jobs market. Through the survey period, there were several significant new job announcements and the live register recorded a marginal fall. However, Irish consumer thinking in relation to employment prospects may have been heavily influenced by a couple of high profile job loss announcements during the February survey period. The closure of HMV and layoffs at B&Q may have resonated more with the average consumer than might gains at ‘newer’ and lower profile companies. So too might indications of additional public sector redundancies and heightened uncertainty about jobs in both the food and financial sectors of the Irish economy. These results emphasise how fragile sentiment remains among Irish consumers. Weakness in this area of the survey accounted for about half of the decline in the overall sentiment index last month.

In contrast to the jobs element of the survey, there was only a fractional decline in consumers’ assessment of the outlook for the Irish economy. This may reflect the absence of any clearly negative driver of the sort that influenced thinking on unemployment as well as some positive impact from the promissory note deal. Roughly half of the February survey interviews were concluded before it was announced that a deal had been reached on the promissory notes on Thursday, February 7th. In the run-up to that announcement, hopes for a significant breakthrough had faded somewhat and this may have played some role in the weaker February reading overall. A comparison of survey responses shows a clear but not dramatic improvement in the wake of reaching the promissory note deal. It appears that the deal limited the deterioration in sentiment last month but was not of itself sufficient to spark a dramatic improvement in confidence.

The limited boost the promissory note deal gave to sentiment probably reflects a number of factors. First of all, the deal does not entail a write-off of the debt. Although such an outcome was most unlikely to be conceded by Ireland’s Euro area partners and the European Central Bank in particular, nonetheless it did feature in many commentaries on the topic. As a result, consumers’ assessment of the scale of concessions that might have been won may have been coloured by some unrealistic expectations of a write-off. In addition, the language and calculus of Ireland’s debut burden remain quite remote from the average Irish consumer even if the consequences in terms of austerity measures are central to their experience of the past few years. For this reason, it may be very difficult for consumers to quickly assess the precise impact of the deal on their financial situation in the coming year or two. Finally, although consumers may feel that while the promissory note deal may ease the burden of further adjustment somewhat, and might reduce the ‘tail risk’ of a particularly harsh adjustment, it doesn’t altogether remove the need for further adjustment. As a result, it could not be expected that what might be deemed a successful outcome would prompt a marked improvement in sentiment. That said, the fragile situation facing Irish consumers mean they may be more sensitised to bad news. So, a clearly unsuccessful outcome could have resulted in a sharp deterioration in sentiment.

It is not unusual for consumers’ assessment of their own financial circumstances to deteriorate in February. Christmas credit card bills and the impact of various Budget measures began to take their toll on household finances last month. In addition, official house price data showed some weakening in December that contrasted with more upbeat industry commentary. So, there were several reasons for consumers to feel more negative about their financial situation. The decline in elements of the survey related to household finances was relatively modest last month but Irish consumers remain fairly gloomy about their financial situation through the coming year. Only 11% of consumers envisage an improvement in their personal finances while 58% expect a further deterioration.

As is usually the case when post-Christmas sales end and New Year bills arrive, consumers also become more negative about the buying climate in February. This deterioration was broadly in line with the correction seen in comparable months for the past couple of years. So, the February results seem to reflect a consumer that remains under pressure rather than one who has dramatically altered their assessment of what lies ahead.

The diagram below shows the somewhat choppy trend in sentiment and retail sales of late and suggests that if sentiment does not improve markedly, retail sales are liable to remain weak. Unfortunately, there is little to suggest any dramatic improvement in household spending power in the near term. If confidence is to improve it will probably require a more stable global economic backdrop and increased confidence that a modestly improving Irish economy will start to deliver a gradual increase in employment and in living standards in coming years. 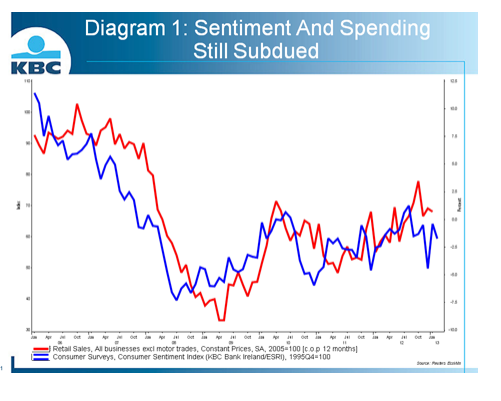