• Better tone of jobs and property market may be easing consumer fears.

• Exceptional weather in early June could also have boosted sentiment.

Irish consumer sentiment appears to have improved by a surprisingly large extent in June. We think the monthly increase reported in the KBC Bank Ireland/ESRI Consumer Sentiment Index likely exaggerates the degree to which the mood of Irish consumers has changed in the past month, nonetheless, it should be seen as signalling some modest improvement in sentiment of late. A combination of economic factors seems to have prompted this change. We also think exceptionally good weather during the survey period may have boosted the outturn for June. This possibility is examined in the final part of this note.

What Do Larger Swings In Sentiment Mean?

As diagram 1 indicates, the KBC Bank Ireland/ESRI Consumer Sentiment Index jumped from 61.2 in May to 70.6 in June. Monthly increases of this magnitude are not unheard of but they are unusual and it is difficult to reconcile a change on this scale with the economic news flow facing Irish consumers through the relevant survey period. We think it may be preferable not to pay too much attention to the monthly change in June but to focus instead on the three month moving average measure of the sentiment series. This points to a more modest but still clear improvement of late. The rather unsteady recent progress seen in consumer confidence in the first half of 2013 follows a marked weakening through late 2012 that was probably related to concerns about a diminishing capacity to deal with further austerity measures. 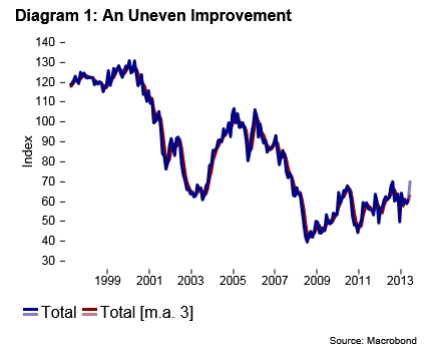 We would downplay the scale of the jump in sentiment seen in the June data and see significant risks of some retracement in the next month or two. Several factors seem to have made the sentiment series notably more volatile in recent years. First of all, the current economic environment is one in which uncertainty has hugely increased and this has led to larger and more erratic monthly swings in sentiment. Second, the fragile state of personal finances and the Irish economy more generally means consumers may be more sensitised to developments that appear to suggest the prospect of moving onto a notably better or poorer future trajectory. Third, in this sort of environment, the very nature of a sentiment survey means that even modest changes in circumstances if they are perceived widely can lead to outsized changes in sentiment measures.

While the jump in Irish survey was exceptional, June also saw an improvement in consumer sentiment in the Euro area and the UK while the comparable US measure remained close to the near six year high recorded in May. Worries about a global financial meltdown seem to have all but disappeared of late while signs of a still fairly restrained improvement in economic conditions have begun to build. In these circumstances, consumers’ worst fears are slightly fading, prompting a spate of slightly less pessimistic confidence readings.

All five elements of the Irish consumer sentiment survey posted improvements in June relative to their May readings. The strongest change was seen in consumers’ assessment of the outlook for the jobs market. This likely reflected encouraging official jobs data that showed continuing gains in numbers at work as well as a sequence of new job announcements through the survey period. As a result, the share of respondents who see unemployment rising in the next twelve months dropped to just 33%—the lowest reading since December 2004 while the number expecting a decline rose to just under 28%—the strongest reading since mid-2005. Interestingly, the change in this element of the survey between May and June was largely driven by a decline in negative response rather than a rise in positive responses. So, the turnaround in sentiment appears to owe more to fading fears than to rapidly improving expectations. Indeed, the fact that these readings are the best in eight years and yet it is still the case that more consumers still see the jobs market worsening than see it improving in the coming year emphasises how severe the deterioration in the economy and the associated drop in confidence have been through the downturn. This also highlights that although consumer sentiment may be set on an improving trend, the current level of the index still points towards a very cautious Irish consumer.

It seems likely that the improvement in sentiment towards the jobs market also contributed to a less pessimistic assessment of the broader economic outlook. Encouragingly, the June data show the proportion of positive and negative views of Irish economic prospects was broadly similar for the first time since mid-2005. Negative sentiment toward the economy peaked in early 2009 around the period when the sharpest falls in activity and employment were seen. In the interim, there has been a limited and uneven improvement. This has been driven primarily by a decline in the proportion of respondents that felt the Irish economy would deteriorate further from around 85% in early 2009 to around 34% at present. Over the same period, the number of consumers who felt the Irish economy would get better has increased altogether more modestly from just fewer than 10% in early 2009 to 33% at present. Given that this dynamic has been driven primarily by easing fears rather than emerging optimism, it will be particularly interesting to see whether disappointing GDP data released after the June survey closed might spark a significant reassessment of the outlook for the Irish economy over the next twelve months.

The June 2013 survey results also showed a substantial improvement in households’ assessment of their personal finances. Both in terms of views of the past twelve months and the coming twelve months, consumer thinking returned to levels last seen late last summer before speculation on Budget 2013 began to unsettle consumers. Our judgement is that a wide range of factors likely contributed to the improvement reported in this element of the June survey. We think that the ECB rate cut implemented in May played some role as borrowers with tracker mortgages began to calculate their monthly savings. We also think that a combination of low inflation, early summer sales and increasing signs of improvement in segments of the residential property market could all have contributed to the more positive reading in this area. Again, we would emphasise that the change was largely driven by fewer consumers who think their financial situation will worsen further rather than any dramatic rise in those who feel their circumstances will improve markedly. Recent indications that the era of tumbling property prices might be over would be a good example of the sort of circumstances in which consumers might now be staring express relief that the worst might be over even if there is little expectation of significant gains in house prices in the coming year.

If the June reading points towards the possibility of an emerging stabilisation in the household finances element of the survey, the level at which this is occurring is still quite weak; roughly 47% of those surveyed expect their household financial situation to deteriorate further in the next twelve months while only 13% see an improvement. As noted previously, we feel the fragile nature of the financial position of the average consumer should be a key influence on the scale of adjustment envisaged in Budget 2014.

Notwithstanding the encouraging June data, we don’t think there is a quick or easy way to rebuild confidence in the Irish economy although it is readily possible to imagine how it could be damaged further. The return of a notably more confident Irish consumer is likely to prove a slow process requiring both the emergence of clearly positive trends in incomes and employment and the end of nasty ‘aftershocks’ following the crisis. In such circumstances, policy risks are asymmetric.  It is far easier to undermine sentiment than to underpin it. So, for example, very painful new measures in the upcoming Budget could make consumers altogether more fearful about their future but it is difficult to imagine what package could credibly convince them all their problems were over. These considerations would suggest that Budget 2014 should seek to reassure Irish consumers that an end to the era of major adjustments is coming within reach. Our sense is that the average cash-strapped consumer would judge progress in this regard in terms of a smaller hit to their spending power rather than a faster than expected decline in the deficit to GDP ratio.

Blame It On The Sunshine?

We were surprised by the scale of improvement in sentiment seen in June and wondered whether very good weather in the early days of the month might have played some role in this result. In principle, this shouldn’t happen because the survey only asks specific questions about the economy and household finances. However, in practice, there may sometimes be an influence.

The fickle nature of Irish weather means we would have to know the exact time and location of each survey response to answer definitively whether weather conditions did influence the mood of consumers last month. We don’t have a breakdown of the form that would allow this sort of analysis but we were able to do some basic statistical analysis to judge if weather conditions help the mood of Irish consumers.

We ran a wide range of regressions* to see whether the amount of sunshine and rainfall or variations in temperature influenced monthly sentiment results. Initially, we didn’t find any consistent statistical link between Irish weather conditions and consumer sentiment. This likely reflects the altogether more powerful influence of what have been profound changes in economic conditions through the sixteen year history of the survey as well as a tendency for Irish weather conditions to be quite variable but not to stray too far beyond what in world weather terms would be regarded as fairly limited boundaries.

We then examined whether more extreme variations in weather influenced the mood of Irish consumers. Our initial findings suggest that when sunshine is more than 40% above or below the norm for a particular month the sentiment survey is accordingly positively or negatively affected. This result was statistically significant at the 5% level. For weather variations 30% away from the seasonal norm the results were very close to significant at the 5% level and for deviations of 20% no clear impact of weather variations were seen in the sentiment survey. Interestingly, a similar analysis of ‘outliers’ in terms of rainfall amounts did not suggest any statistically significant impact of unusual rainfall amounts on sentiment, perhaps reflecting  a stoical acceptance of ‘soft‘ days on the part of Irish consumers.

A good deal more work is needed in this area but our preliminary results suggest that while we talk a lot about the weather there isn’t a continuous link between weather conditions and Irish consumer sentiment - perhaps this says we’re attuned to a fickle but generally temperate climate. However, on the odd occasion that we experience a prolonged spell of exceptionally good weather it does seem to lift the mood of the Irish consumer. Next month’s results might provide a little more insight as to how strong this influence might be in that it may indicate the extent to which extremely good weather can offset gloomy economic news such as the disappointing GDP data for the first quarter of 2013.