Irish Consumers A Little More Optimistic In June (Before Brexit)

Irish consumer sentiment improved in June. The KBC Bank Ireland/ESRI consumer sentiment index increased to 103.4 in June from 98.1 in May, effectively reversing the weakness reported in the May survey. The pick-up was led by stronger sentiment in relation to job prospects but all of the five main components of the index reported stronger readings than in May.

The June survey was completed in the first two weeks of the month. So, it doesn’t capture any reaction to the result of the UK referendum to leave the EU (or any repercussions from Ireland’s various sporting highs and lows in the second half of the month).

At current levels, the sentiment index suggests Irish consumers are reasonably positive about their economic circumstances. That said, as the diagram below indicates, the level of the index is little changed from twelve months ago. So, the recent trend which is choppy but largely unchanged stands in stark contrast to the sharp improvement seen through the previous couple of years. While the very poor sentiment of the crisis has faded, there is little sense that it has been replaced by a broadly based ‘feelgood’ factor that would drive sentiment progressively higher.

The pattern seen in the sentiment survey since the start of the year in which most months move in the opposite direction to the previous month implies that Irish consumers are having significant difficulties in assessing what a constantly changing global and local economic picture might mean for them. Such difficulties have increased notably in the wake of the UK decision to leave the EU because of the profound uncertainty as to exactly how and when Brexit might affect the circumstances experienced by the typical Irish consumer. 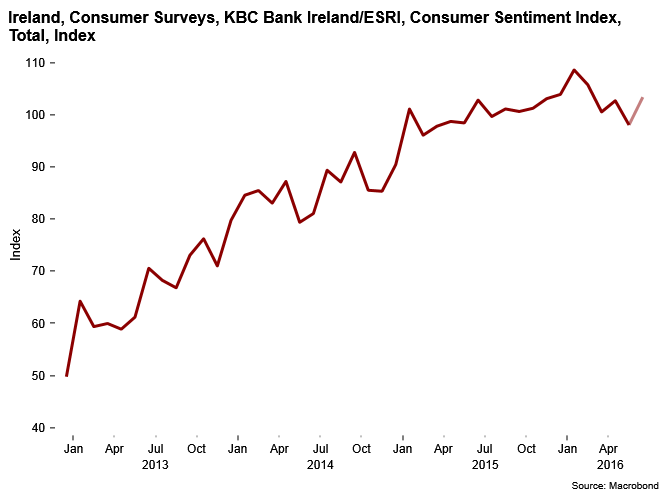 By increasing both uncertainty and downside risks to the economic outlook, Brexit is likely to weigh on Irish consumer sentiment in coming months. How strong these effects might be or how long they might dominate the survey results is unclear. Uncertainty has increased notably further in the wake of last month’s UK vote and a clear picture of the implications for Irish households of the UK’s departure from the EU may not emerge for some considerable time.

In the interim, thinking on when and exactly how the effects of Brexit might be felt could change repeatedly. These considerations suggest that Irish consumer sentiment readings could remain very ‘choppy’ in the near term with a risk of clearly softer readings in the next month or two. However, while we expect some weakening in sentiment, we don’t expect any dramatic deterioration.

Although ‘Brexit’ concerns may weigh on sentiment in the next couple of months, the likely absence of any major fall-out immediately affecting the circumstances of the average Irish consumer should limit the extent of damage both to sentiment and household spending in the near term. Our judgement is that the main channels through which the early impact on the Irish economy of Brexit will be seen are external trade and investment rather than household spending.

While worries about jobs and the general economic outlook may build, such concerns are unlikely to be amplified by any significant Brexit –related weakening in economic activity indicators, company news-flow or the current financial circumstances of most households for some significant time. Indeed, for many Irish consumers, the earliest signs of Brexit may come in the shape of cheaper–priced UK goods.

For this reason, the behaviour of the sentiment survey over the next couple of months may primarily be an indicator of how confident, concerned or confused Irish consumers are about their general economic situation at present. The extent to which consumer confidence is fragile rather than firmly entrenched is likely to determine the reflex response to shocks such as Brexit.  We would caution that poor sentiment readings in upcoming months are more likely to reflect the generality of pressures on Irish household finances and the intrinisic uncertainty in the current economic environment than they reveal about the precise impact that Irish consumers households expect Brexit will have on them.

The rise in Irish consumer sentiment in June was at odds with a softer trend in comparable indicators elsewhere. The US sentiment index dipped after a strong May reading on increased concerns about the outlook for economic growth. Euro Area consumer confidence fell back on similarly increased ‘macro’ concerns in spite of a stronger assessment of household finances. In the UK, sentiment was little changed in June as worries about poorer economic conditions were offset by improved household finances. (It should be noted that all these surveys were taken before the UK referendum vote.)

The marked contrast in US, Euro area and UK sentiment readings between increasing worries about the ‘macro’ environment and greater confidence about household finances probably reflects the consequences of the former on the latter in the shape of very low inflation and borrowing costs. As a result, a likely further step-up in ‘macro’ concerns in the wake of the Brexit vote suggests the prospect of a deterioration in sentiment readings across a range of countries in the months ahead.

In contrast to developments elsewhere, a notable aspect of the Irish consumer sentiment reading for June was that all five elements of the Irish survey improved in June. This reversed a similarly broadly based decline in May.  As was the case elsewhere, the strongest improvement was in the ‘macro’ elements of the Irish sentiment survey, led by a recovery in thinking on the outlook for jobs to its strongest reading of the year. We felt that the particular weakness in this element of the survey in May had been triggered by some specific developments relating to high profile job losses and industrial disputes.

Concerns about employment seem to have eased notably in the interim probably reflecting developments on several fronts. The June survey period saw a large number of new job announcements, the resolution of the pay dispute at Luas and strong employment and unemployment data. This combination likely encouraged a notably more positive assessment for the Irish jobs market. In turn, this would have supported an improvement in thinking about the broader outlook for the Irish economy as would the recent OECD outlook which became the latest upbeat assessment of Irish economic prospects by an authoritative external body.

The June survey also saw a modest upgrading of the two elements of the survey relating to past and prospective household finances as well as a similarly sized improvement in buying intentions. Irish consumers aren’t seeing any major changes in their personal financial circumstances but, in the absence of bad news during the survey period, modestly positive trends in earnings and in house prices coupled with low borrowing costs seem to be sufficient to produce some slight gains in these components of the survey. These factors also contribute to our judgement thatwhile greater caution may be a feature of upcoming sentiment surveys and will undoubtedly be a restraining influence on spending, we expect some slowdown rather than a slump in Irish consumer spending in coming months.