Increased uncertainty a key issue for sentiment in Ireland and elsewhere

Irish consumer sentiment improved in August. The recovery of most of the decline recorded in the July survey reflects a number of elements. First of all, The UK’s Brexit vote didn’t cause the economic sky to fall even if it made it a lot cloudier. As a result, Irish consumers reassessed both the timing and extent of the damage that the UK’s exit from the EU might cause the Irish economy.

The absence of immediate Brexit fallout coincided with further evidence of the continuing health in the Irish economy through the August survey period in the shape of official statistics and an impressive range of hiring announcements. These developments served to ease much of the nervousness hinted at in the July sentiment survey results.

The August survey hints that Irish consumers are still cautiously optimistic in relation to the outlook for the Irish economy and their own household finances.However, the fact that August sentiment reading merely matches the average of the previous twelve months suggests there is also a distinct absence of a broadly based ‘feel-good factor’. In turn, the combination of elevated uncertainty about the future and continuing financial strains suggests many Irish consumers remain unwilling or unable to significantly increase their spending.

The KBC Bank Ireland/ESRI consumer sentiment index increased to 102.7 in August, a 3.1 point monthly gain which reversed most of the 3.8 point drop seen in July. The August reading is above the historic average of the sentiment series but only matches the average of the past twelve months. So, there is a sense of an Irish consumer caught between the promise of a recovering economy and the pressures of strained household finances while simultaneously trying to understand the implications of a range of unpredictable developments such as Brexit.

Irish consumers are not alone in feeling cautious about their current circumstances. August readings for comparable sentiment indicators for the US, the UK and the Euro area were all clearly below their average levels of the past twelve months.  This reflects both the global nature of current uncertainty about the future and a strong sense in many countries that the average consumer feels they have not fully participated in any improvement in economic conditions in recent years. This combination of unease and disappointment is illustrated in the recent trend in US consumer sentiment which we compare to the KBC/ESRI measure for Ireland in the diagram below. 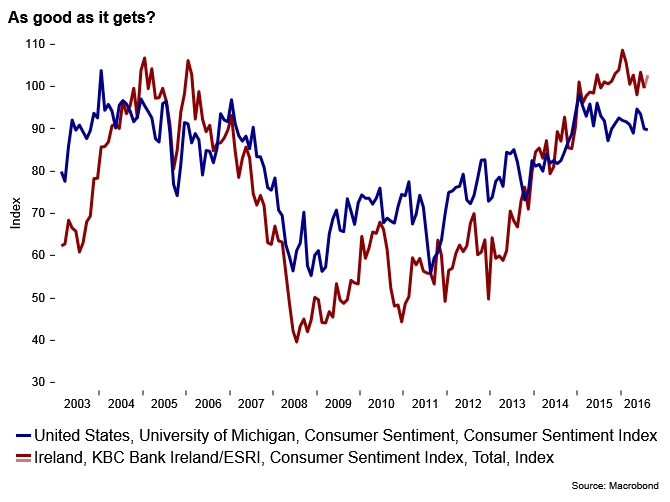 While confidence measures for the US and the Euro area both posted modest declines for the third month in a row in August, the comparable UK survey reported a limited correction of a portion of the sharp fall seen in the immediate aftermath of the UK Brexit vote. Overall, it could be argued that global influences on Irish consumer sentiment are not particularly encouraging at present.

The recovery in Irish consumer sentiment in August was most pronounced in those areas that had seen a sharp downgrading in the July reading. Views on Irish economic prospects improved notably but it remains the case that last month’s result was the second weakest (after July) for this element of the survey since June 2014.

Moreover, the improvement in views on economic prospects in August largely reflected an easing in negative responses to this question (from 25% to 15% of those surveyed) rather than any dramatic recovery in positive responses (which rose from 41% to 45%). So, Irish consumers see scope for further economic gains but are clearly mindful of significant downside risks to the recovery.

Our sense is that the pick-up in the views on the Irish economic outlook largely reflected the absence of any dramatic indications of a Brexit related deterioration in Irish economic conditions during the survey period but encouraging Census data and the generally positive response to the Government’s Action Plan for Housing and Homelessness may also have contributed to some easing in concerns about the economic outlook.

There was also a notable recovery in consumers’ views on job market prospects in August. As has been the case for some time, the latest survey period saw a large number of new job announcements and these encompassed significant hiring plans from companies as diverse as Lidl and Pfizer.  Again, it should be noted that the jobs element of the August survey implies expectations of further gains in employment in the next twelve months but these views are less strongly held than has typically been the case through the past couple of years.

As in July, changes in Irish consumers’ thinking in relation to household finances were more muted than the changes seen in their ‘macro’ views. On balance, consumers were a little more cautious about their personal financial circumstances. Some deterioration in their assessment of the past twelve months may be linked to a small pick-up in inflation and a notable media focus on particular problem areas such as insurance and residential rents that have seen sharp price increases continue for some considerable time.

A slight improvement in expectations for household finances for the next twelve months may owe something to widespread media coverage of Government plans to gradually phase out the Universal Social Charge. A marginal improvement in consumers’ assessment of the current buying climate in August could be helped by late summer sales but is unlikely to signal any marked acceleration in spending in the near term.

Instead, these elements seem consistent with the broader message of the August sentiment survey that Irish consumers remain cautiously positive in their outlook. However, they appear to be waiting for a clearer picture in regard to the general economic outlook as well as what may happen to their own spending power before confidence effects impart any major boost to household spending.