Rise at odds with declines in sentiment series in US, UK and Euro area

Irish consumer sentiment showed a significant and somewhat surprising rebound in November. At this juncture, it is not possible to be definitive as to the reasons for this improvement in confidence. However, a number of factors could have contribute to  this result.

The bounce may owe something to a spate of strong economic releases and a large and diverse range of new job announcements through the survey period. It could be the case that consumers focussed ahead on the prospect of some Christmas light at the end of a pandemic-related tunnel. In this context, as we discuss below, it may also be that in current circumstances, Irish consumer sentiment is particularly sensitive to the perceived ebb and flow of the virus and the November bounce may be driven, at least in part, by a trend decline in reported Covid -19 cases through the survey period.

We would also highlight the choppy nature of survey readings in recent months as consumers in Ireland and elsewhere attempt to make sense of an unprecedented and very uncertain environment. It should also be emphasised that the level of the November sentiment reading still points to a cautious and likely confused Irish consumer.

The KBC Bank Irish consumer sentiment index jumped to 65.5 in November from 52.6 in October, returning the index to its strongest level since March (77.5). However, as the diagram below illustrates, the November reading remains substantially below both its early 2020 reading (January, 2020 was 85.5) or the average of the twenty five year survey (of 87.0).

In addition, the three month average of the survey that may give a better sense of recent trends improved only marginally in November, to 59.6 from 57.4 previously. So, while the November sentiment results should be regarded as very encouraging, they still reflect relatively low levels of confidence among Irish consumers. 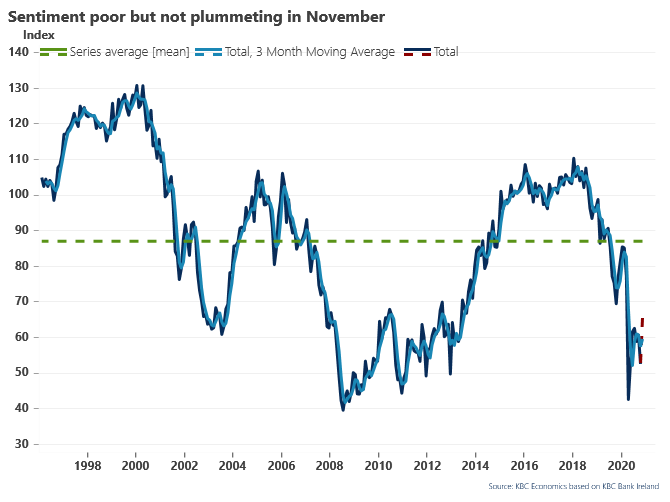 The improvement in Irish consumer sentiment in November contrasted with declines in comparable indicators for the US and UK and Euro area. In the case of both the US and UK, the relevant metrics may have been affected by particular concerns about recent economic developments but also by significant domestic political turbulence as well as a worrisome trend in Covid-19 cases of late. In the case of the Euro area, we might speculate that the major influence was the surge in the virus during the survey period.

The KBC Bank consumer sentiment index is focussed on  the economic and financial circumstances faced by Irish consumers but there is little doubt that those circumstances are currently framed by developments in relation to the coronavirus.

As the graph below (showing  reported Covid cases and the sentiment index with values inverted ) indicates, through the past nine months, there has been a strong  negative correlation between the direction of change in the sentiment index and the trend in reported Covid-19 cases. Understandably as reported cases rose, Irish consumers became more concerned while the apparent easing in the pandemic through the summer reduced but did not fully removed worries.

As a result, it might be suggested that the October survey captured the impact of a rising virus threat and the related implications for restrictions which translated into a marked weakening of economic prospects that weighed on sentiment. In contrast, falling new case rates through the November survey period may have encouraged hopes for some normalisation and reduced pessimism somewhat.

We would also note that a rough comparison of survey results received before and after November 8th,  when news emerged of a potentially effective vaccine did not show marked differences, although there were slightly more positive readings in the latter period in relation to the outlook for household finances. There is little indication in these data that the mood of Irish consumers was markedly affected by encouraging news on the vaccine front. 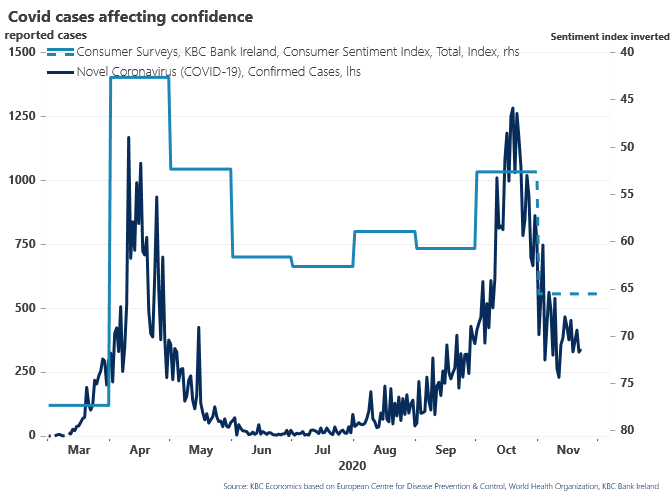 All five main elements of the consumer sentiment index showed material improvements between October and November but the gains were most pronounced in relation to the ‘macro’ components of the survey. As noted in our commentaries on activity and employment indicators, the pandemic has imparted a severe ‘macro’ shock on Ireland and elsewhere but the intensity of impact across age groups, regions, employment categories and the income distribution has varied widely. Hence, the ‘personal’ elements of the survey have seen a smaller if still substantial weakening.

Consequently, the components of the sentiment survey that have seen the largest negative impact from the coronavirus are those focussed on broad economic developments rather than personal finances. It is also likely that substantial policy action to support incomes and limit financial fallout also eased the direct pain suffered by most consumers. In these circumstances, it is scarcely surprising that ‘macro’ rather than ‘micro’  elements of the survey responded most to a positive trend in reported Covid cases in the November survey period.

The largest monthly improvement came in relation to the outlook for the jobs market. This likely stems from the perception that twelve month views reflected increased expectations that the pandemic would no longer be an issue on that time-frame. Importantly, it is also the case that there has been a large and diverse range of new job announcements of late. These included openings in pharma and pizza companies, in delivery and digital media, and, as such, they  highlight the underlying resilience of the Irish economy.

The survey period also saw a range of economic commentaries upgrade the outlook for the Irish economy and generally positive assessments of the scale and scope of measures introduced in Budget ’21. These developments meant there was also a marked improvement in consumers’ thinking on the outlook for the Irish economy compared to October. However, it remains the case that Irish consumers have a very negative view of the economic conditions that may lie ahead. Just  two in three consumers expect the Irish economy to weaken further and only one in ten anticipate stronger conditions.

In the same vein, an improvement in the outlook for household finances in the November survey still leaves consumers fairly downbeat about their personal financial prospects, with only one in seventeen expecting their circumstances to improve in the next twelve months. The encouraging aspect is that the number envisaging a deterioration in their household finances dropped from one in three in October to one in four in November.

Set alongside spending plans that have remained far more resilient than other elements of the survey, this hints at the possibility of a decent bounce in consumer spending over the Christmas period and a notably more muted drop in outlays overall for the fourth quarter than was seen in the Spring.

As noted previously, the prospect of a smaller initial drop in activity than widely feared reflects both the uneven nature of the job and income losses caused by the pandemic in Ireland (and elsewhere) and the speedy and substantial policy supports enacted. While this has limited the initial ‘macro’ hit and should provide material support to spending over the festive season, our consistent concern has been that aggressive and increasingly delineated policy support needs to be sustained to avoid lasting difficulties in some areas and an increasingly corrosive economic and social spill-over.

Although it is vitally important to counter’ threats to the immediate outlook and support sentiment and spending over end-year, an economy is not just for Christmas. The key task must be to ensure the policy framework develops in a manner that limits the longer term threat to jobs and incomes as well as health outcomes.