Irish consumer sentiment steadies in May on postponed Brexit

May sentiment reading of 89.9 not materially better than 87.7 April figure

….while 18% of consumers see Brexit worsening their job prospects

Irish consumer sentiment held steady in May as consumers weighed up the implications of a delayed Brexit in circumstances where an improving jobs market may be delivering gains in household spending power.

The stable sentiment reading may reflect some limited measure of relief at what is at least a a brief respite from the imminent threat of a hard Brexit. As risks in this regard were seen to be delayed rather than dispelled, there was no marked jump in confidence, particularly in circumstances where global economic prospects remain challenged.

The May survey did show a clear improvement in views on the Irish jobs market that fed through to marginally more positive expectations for household spending power. These elements countered a more negative reading on current income trends and a related caution in regard to spending plans.

The KBC bank consumer sentiment index increased to 89.9 in May from 88.6 in April, an increase that is too small to suggest any significant change in the mood of Irish consumers last month. Indeed, the 1.3 point change in the index is the lowest in the past five months and the second lowest since the beginning of 2018, marking a notable departure from the sharp swings that have been a feature of the sentiment survey of late.

We don’t see any specific domestic reason why the mood of Irish consumers would have lagged behind other countries in May. Our sense is that even though the survey period saw Brexit further delayed, concerns about economic consequences of the UK's looming exit from the EU continue to cast a greater shadow over Irish consumer sentiment than on similar metrics for other countries including the UK.

The absence to this point of a widely predicted collapse in UK economic conditions appears to have closed British consumers’ eyes as to the prospective damage Brexit could cause in the future. As a result, May saw UK consumer sentiment climb to to an eight month high. This assessment seems broadly consistent with polls showing strong popular support for a ‘no deal’ Brexit in the UK of late.

In contrast, our reading of the Irish survey results suggests no appetite among Irish consumers to 'get on with it'. In part, this may reflect a more realistic sense of the potential dislocation that Brexit may bring but it may also be that the scars of the recent crisis make Irish consumers particularly sensitive to any form of downside risk to their prospects.

The largely unchanged Irish consumer sentiment reading for May resulted from generally modest and offsetting changes in the five components of  the sentiment index. Three of these were positive while two were negative.

The most notable change in the index between April and May was seen in an improving jobs element of the survey. To some extent this may reflect a reflext response to the postponement of Brexit but the survey period saw a series of new job announcements spread geographically and sectorally. The May survey may also be reflecting some of the positive developments captured in recent official data on jobs and earnings growth that resonated more with consumers in circumstances where Brexit concerns may have eased marginally.

While both ‘macro’ elements of the sentiment index were stronger in May than in April, views on household finances were more mixed. While still marginally positive, consumers were a little more downbeat on the trend in their financial circumstances over the past twelve months.  This may reflect  the recent  jump in inflation (up from +1.1% in March to a six year high of 1.7% in May) and the related sharp increase in energy prices in particular.

In turn, the slightly weaker assessment of recent financial trends fed a similarly modest pullback in spending plans although this could also reflect a seasonal effect ahead of expected higher summer outlays. In spite of these developments, there was a marginal improvement in views on household finances for the next twelve months.  This is consistent with the more positive view of the outlook for jobs and may suggest expectations this will spill over into stronger income growth. The positive reading in this area of the survey could also be influenced by growing expectations that borrowing costs will remain low into 2020.

It may be interesting to compare the economic mood of Irish consumers in May 2019 with that of May 2014 when the previous EU elections took place. Notwithstanding recent nervousness about Brexit, the overall consumer sentiment index reading of 89.9 in May  2019  is significantly higher than the May 2014 reading of 79.4.

Only one of the five elements of the survey is lower than it was in May 2014; the outlook for the Irish economy over the next twelve months. Given the risks around Brexit, the nature of consumer concerns in this regard might not favour support for radically different or untested policy paths.

Views on unemployment and household finances all show positive balances (albeit  modestly so) at present in contrast to markedly negative balances in 2014, an outturn that would imply at very least some reduction in any ‘feel-bad’ factor over the past five years. Moreover, the improvement in these metrics since 2014 might suggest some increased financial capacity to handle near term costs that might be related to carbon reduction.

Brexit: where does it hurt?

Brexit concerns have been an important element in the notably weaker trend in Irish consumer sentiment since the middle of 2019.  The degree of uncertainty that continues to surround Brexit means most of the impact on sentiment is likely to be seen in the shape of general nervousness about the overall impact of Brexit on activity and employment in the Irish economy. 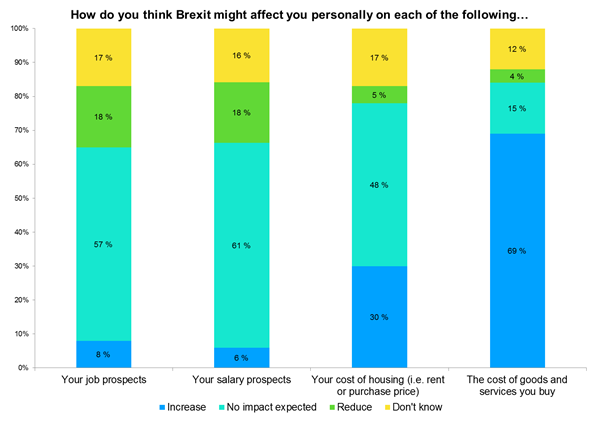 In the May survey, we asked consumers to indicate whether Brexit would affect various aspects of their personal financial circumstances.  The results shown in the diagram below suggest the most broadly feared impact is higher inflation. Some 69% of consumers expect Brexit to raise the prices of the goods and services they buy while just 4% anticipate lower prices. This likely reflects fears about price increases resulting from tariffs and disruptions to supply chains. In this respect, Irish consumers seem to think the final impact of Brexit to be notably more adverse than the recent past when (in the absence of changes in trade arrangements) weakness in Sterling has dampened Irish inflation.

Perhaps surprisingly, as many as 30% of consumers feel Brexit could raise the cost of housing to them while just 5% see Brexit reducing their housing costs. This result likely stems from concerns about the consequences for house prices and rents of additional demand from Brexit related business and personal migration from the UK to Ireland. While it may not been the central concern in consumer thinking, it could also be argued that broader Brexit -related uncertainty might constrain home building plans thereby sustaining the shortfall in housing supply.

A perhaps surprising 8% of respondents felt Brexit could improve their job prospects, presumably reflecting opportunities for substitution of UK produced goods and services as well as the consequences of the relocation of businesses from the UK to Ireland.

Not surprisingly respondents from Border areas saw a greater degree of threat and less opportunity from Brexit. The large but uncertain shadow across the Irish economy from Brexit means that concerns about job and salary prospects were similar in intensity.

The May sentiment release introduces some changes to the monthly survey although the basic format remains the same. In reflection of profound changes in Ireland in recent decades, it has been decided to switch the contact mode of the survey from phone to internet. According to Household Budget survey data from the CSO, some 89% of Irish households had a fixed telephone line while 14% had internet access in 1999. However data from the Communications regulator suggest that in 2018, the proportion of Irish households that had a fixed phone line had slipped to 67% while CSO data indicate 89% of households had internet access.

Reflecting these developments and the diminished access to younger age groups in particular through the medium of fixed line phone contact, it was decided to switch the survey mode to internet based. The survey will draw from a panel of more than 80,000 to create a monthly panel of 1,000 that is representative of the Irish population as a whole (based on Census 2016 characteristics).  Core Research has taken over from the Economic and Social Research Institute (ESRI), who previously worked with KBC on the survey. To ensure continuity, KBC carried out a two-month parallel run of ESRI and Core Research data collection processes to compare old and new formats.