…but Brexit not seen as posing clear and immediate threat to household finances, so…

Renewed convergence of survey components likely, but in which direction?

Irish consumer sentiment declined in July but the scale of the drop was relatively modest, particularly in comparison to the deterioration in a comparable UK measure illustrated in diagram 1 below.  Brexit has less immediately threatening implications for the average Irish consumer than it does for firms exporting to the UK but the details of the survey point to a clear understanding that ‘Brexit’ is bad news for the Irish economy and, by extension, for Irish households. However, they also suggest that a range of factors behind the recently improved momentum in domestic economic activity are providing some offsetting support to consumer sentiment and spending.

Irish consumers sharply marked down their assessment of the general economic outlook in July but only slightly adjusted their assessment of their household finances and, perhaps surprisingly, they were more upbeat about their immediate spending plans-presumably in response to the onset of summer sales and holidays.

The KBC Bank Ireland/ESRI consumer sentiment index fell to 99.6 in July from 103.4 in June. That 3.8 percentage point drop was smaller than the monthly declines seen in either March or May. Moreover, the July sentiment index still sits comfortably above its long term average. So, the overall survey result for July does not suggest any dramatic fall-out from the results of the UK referendum on EU membership. 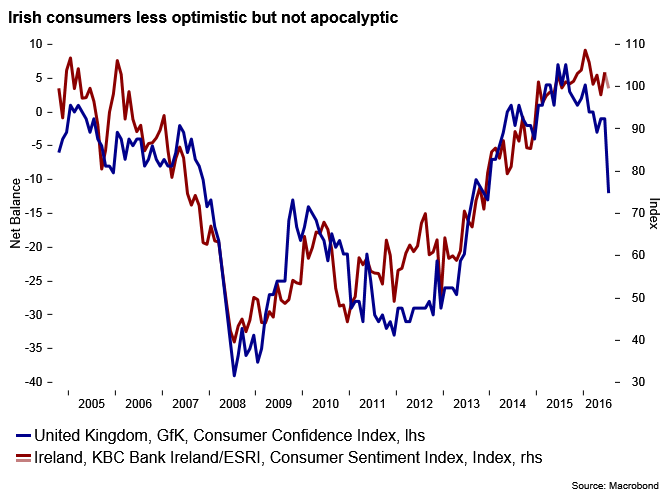 It is scarcely surprising that the UK result is such an outlier given the potentially profound change in the direction of the UK economy that Brexit implies. This is reflected in a pronounced weakening in UK consumers’ assessment of the general economic situation. That poorer outlook combined with a much reduced purchasing power in relation to UK households’ capacity to buy goods and services abroad also prompted a downgrading of British consumers’ views on their personal finances.

Brexit was cited as a concern by some respondents to the US consumer sentiment survey but our sense is that some disappointing economic data and the increased focus the looming presidential election has placed on various economic, social and political difficulties in the US were more notable drivers of the weaker sentiment reading in the States last month.

Similarly, while Brexit considerations undoubtedly played some role in the drop in Euro area confidence, it is likely that domestic issues were also important in what was a mixed Euro area report where 10 of the other member countries reported declines, 7 reported improvements and one recorded an unchanged confidence reading.

There is a sense in July readings for various countries other than the UK that Brexit played an important role but that it was not the only influence on consumer confidence. This also seems true of the latest Irish sentiment data. It appears that Irish consumers envisage a forceful negative Brexit impact on Irish economic prospects but the July survey suggests that such effects might be significantly offset by the current momentum in domestic demand.

Irish consumers less optimistic about the economic outlook and jobs

Although, the overall decline in Irish consumer sentiment was relatively modest, there were sharp drops in some components of the index. Consumers’ expectations for the Irish economy weakened to the lowest level for this element of the survey since November 2013. The number of consumers expecting the Irish economy to strengthen in the next twelve months fell from 55% in June to 41% in July while the number expecting it to weaken rose from 14% to 25%. This still suggests that more consumers expect an improvement than envisage a deterioration but the scaling back of positive expectations in the past month is quite marked.

Similarly, there was a notable downgrading of the outlook for jobs to its weakest reading since June 2014. Again, the balance of responses to this question remains positive but the proportion of consumers expecting a further drop in unemployment fell from 51% in June to 37% last month while the number expecting an increase in unemployment rose from 18% to 27%. So, on balance, Irish consumers are still positive about the outlook for jobs but they are notably less optimistic than they were a month ago.

Although Irish consumers report a substantial downgrading of their ‘macro’ environment, they were notably less inclined to adjust their views on their own household finances. In our comment on the June sentiment data we hinted that in the near term, the direct negative effects of Brexit on Irish consumers might be quite limited while Sterling weakness would hold out the prospect of notably cheaper UK prices for a range of consumer goods and services.

While, the UK referendum result has had a dramatic impact on financial markets and prompted an exceptional amount of media commentary in Ireland and elsewhere, the immediate implications for the average Irish consumer might be seen as notably less concrete than other developments that typically weigh on sentiment such as news of major job layoffs or the prospect of looming changes in key areas of public spending or taxation.

Our sense is that deep uncertainty in relation to so many key aspects in relation to ‘Brexit’- from when it might occur to what might be the everyday implications for Irish consumers of the UK’s eventual post-exit relationship with the EU- meant that the UK referendum result wasn’t seen as posing clear and immediate risks to Irish household finances. Moreover, while the ‘macro’ elements of the July survey are notably weaker than those reported in June, on balance, they still point to an expectation that the upswing in the Irish economy will continue.

With Irish consumer spending power currently being assisted by some modest improvement in earnings, a supportive fiscal stance, low inflation and borrowing costs, it is not entirely surprising that the July sentiment survey reflects some supportive influence from these factors. That said, the details of the survey reveal some contrast between a more positive view as to how financial conditions had evolved in the past twelve months and a decline in the outlook for the next twelve months, albeit fairly modest relative to the changes reported in the ‘macro’ elements of the July survey.

The details of the July survey suggest Irish consumers clearly appreciate the risks that Brexit poses for the Irish economy but also hint at understandable reasons why this did not translate mechanically into a similarly scaled markdown of their assessment of their household finances. In turn, this meant there was no marked change in spending plans. In fact, probably the most surprising aspect of the July sentiment reading was a marked improvement in the buying climate which saw this element of the survey climb back to levels last seen in January.

At the margin, the stronger buying climate may reflect the significance of the new 16-2 car registration plates but we think it also reflects a behavioural change on the part of Irish consumers entailing a notably more price conscious approach to spending. This in turn leads to a notably more concentrated pattern of big-ticket purchases to avail of price discounting at the seasonal sales times of the major retailers. Such behaviour would seem consistent with the weakness of official retail sales data for June and would suggest the possibility of a marked recovery in July sales data.

Where next for sentiment and spending?

While we understand why it happened, the apparent disconnect in the July sentiment survey between a marked downgrading of the general economic outlook and an improvement in the buying climate is unlikely to be sustained. Whether a renewed convergence in the various elements of the sentiment survey comes about because clear evidence of weaker ‘macro’ conditions prompts a downgrading of the outlook for household finances or the factors now seen supporting household spending are deemed sufficiently entrenched to lead to a renewed upgrade to the ‘macro’ outlook is still unclear.

In the very near term, a pull-back in the buying climate could weigh on the August survey reading. Thereafter, the behaviour of sentiment and spending is likely to be shaped by developments such as news flow on Brexit and other global concerns but also by expectations for Budget 2017.

There is a role for domestic policymakers to try and minimise any further fallout in sentiment and, by extension, to limit any pull-back in household spending. Although international developments will remain critically important, the tensions evident within the July sentiment reading increase the importance of recognising key priorities in domestic policymaking.  While scope to alter the contours of Brexit is very limited, ensuring the adoption of a Budget for 2017 that is seen to be both supportive of economic activity and sustainable in terms of the trajectory of the public finances has become altogether more critical.