Irish consumer sentiment edged lower in August following three months of positive readings that signalled some improvement after the Covid-19 related collapse in confidence through March and April.

The pull-back in consumer sentiment in August is not entirely surprising. It likely reflects mixed news about the likely strength and speed of a rebound in economic activity and employment in Ireland and elsewhere from the sharp decline seen in the second quarter as well as renewed concerns about the trajectory of the Coronavirus at home and abroad.

The August data may mark the beginning of a period of potentially volatile sentiment readings as thinking both in regard to the economy and the  pandemic  may be prone to marked swings between optimism and pessimism.

The KBC Bank consumer sentiment index fell to 58.9 in August from 62.6 in July. This was the first decline since a collapse in April that took the index to its lowest level since October 2008. The 3.7 point drop in the index in August is entirely different to the 34.7 point drop in April and not unusual in terms of the normal monthly fluctuations in sentiment. As such, the August data shouldn’t be seen as signalling any major mood swing on the part of Irish consumers.

The August sentiment results do suggest any improvement now underway in the circumstances of Irish consumers is uneven and tentative. There have been some very positive elements in recent spending data that, together with the trend in consumer confidence in recent months, point to a clear turnaround in sentiment and spending from April’s low-point. However, the muted survey results for both July and August suggest that we may be seeing a limited rebound rather than the first signs of a lasting recovery in Irish economic conditions of late.

Our sense is that the key driver of the pull-back in consumer sentiment in August was the resurgence of coronavirus concerns highlighted by the postponement of phase 4 of the easing of restrictions nationwide and the re-imposition of ‘ local lockdowns’ in Kildare, Laois and Offaly. In that respect, the survey may capture a consumer attempting to re-assess the likelihood of lasting disruptions from the pandemic. In this context,  both the direct health-related concerns and the knock-on impact on the outlook for economic activity and employment likely weighed on sentiment.

In these circumstances, it might be argued that the latest decline in the sentiment index in August was reasonably contained. In part, this is because, the current level of 58.9, which is notably closer to February’s recent low-point of 42.6 than the pre-pandemic February reading of 85.2, is signalling a relatively downbeat Irish consumer. The sense of a nervous Irish consumer is evident from negative responses that substantially outweigh positive responses for all of the key questions that make up the index.

The sharpest decline in sentiment in August occurred in relation to the outlook for employment, likely because of a significant focus on the adverse implications for jobs of stricter than anticipated ‘lockdown’ measures at the start of the survey period. The read-through from these measures to employment risks for ‘local’ businesses is fairly straightforward.

Not surprisingly, the broader outlook for the Irish economy was also downgraded. This was prompted by a significant drop in the already marginal number of consumers expecting the Irish economy to strengthen in the next twelve months. Indeed, the entrenched pessimism of this aspect of the survey may have served to limit its decline in August.

Those parts of the consumer sentiment survey focussed on household finances were mixed in August. There was a marginal improvement in the assessment of financial conditions over the past twelve months, possibly supported by the Government’s announcement of the extension of its wage support scheme. However, consumers were more cautious in relation to their future financial circumstances and this likely contributed to a clear downgrading of spending plans.

In circumstances where uncertainty is as elevated as it is at present but spending power is being supported and some ‘pent-up’ demand could be released, it is possible that the sentiment survey could overstate the weakness in consumer spending in the near term. The key unknown is whether sentiment or spending will adjust as 2020 progresses. In turn, this depends on the extent to which the pandemic and related economic damage are seen as modest and manageable or  the major determinant of the economic future.

As the diagram below illustrates, in the past, marked divergences between sentiment and consumer spending in 2001/2 and again in 2007/8 were followed by major declines in household spending as the fears seen in the sentiment survey crystallised. In contrast to those episodes, there is both scope and need for ambitious domestic policy both in relation health measures and fiscal support to reduce the risk that sentiment and spending follow a weaker path into 2021. 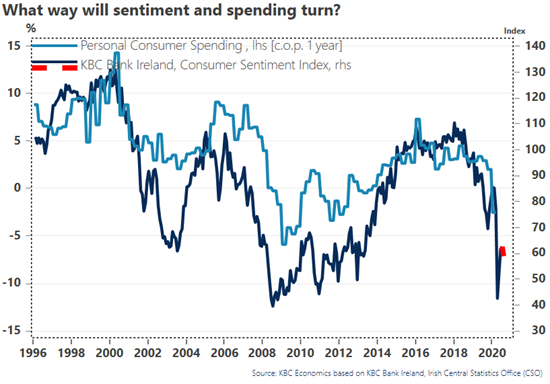