Irish consumer sentiment weakened for the third month in a row in September as concerns about a chaotic Brexit made consumers more nervous about the outlook both for the Irish economy in general and their personal finances in particular. Unfortunately, the nature of Brexit means they find themselves instead in ‘sit and suffer’ mode.

The September survey paints a picture of a very anxious Irish consumer who could be further unsettled if the upcoming Budget creates a sense of panic about the possibility of much tougher times to come. While Budget ’20 must be realistic, it should seek to reassure in regard to a capacity to weather upcoming storms rather than raise concerns that a much poorer economic climate is set to return.

The KBC Consumer Sentiment Index fell to 75.3 from 77.2 in August. While the drop in confidence in September was notably smaller than in either of the two previous months, it was still sufficient to push the sentiment reading to its lowest level in nearly six years. The last time the KBC sentiment index was lower than at present was in November 2013 when the index stood at 71.0.

The decline in Irish consumer sentiment in September 2019 stands in stark contrast to modest monthly improvements in similar confidence indicators elsewhere. In the US, consumer sentiment partly reversed a significant drop seen in the August reading as sustained gains in household incomes were seen offsetting increased  ‘macro’ uncertainty.

For the Euro area as a whole, the rise in consumer confidence in September marginally exceeded the drop recorded in August. The improvement reflected both a modest scaling back of ‘macro’ concerns and a more positive assessment of household finances.

Even in the UK, consumer confidence edged higher in September led by improvements in perceptions of household finances. While sentiment among UK consumers is still in the region of six year lows and monthly movements have been choppy, there hasn’t been anything like the precipitous fall in confidence through the past year or so that has been seen in Irish consumer sentiment.

The contrast between September 2019 sentiment readings for Ireland and elsewhere seems to reflect two related factors. First of all, in terms of the factors influencing confidence among Irish consumers at present, it seems that Brexit concerns are not the main issue, they are the only issue.  In the same vein, unlike their counterparts in other countries where the mood of consumers is being buffeted by uncertainty, Irish consumers appear now to be almost exclusively on downside risks.

As a result, the September sentiment survey saw a further decline in circumstances where it might have been expected that here could have been some uplift from still broadly positive trends in the Irish economy or the  determined UK parliamentary opposition to the possibility of a ‘no deal’ Brexit during the September survey period. In this context, Irish consumer thinking may reflect scarring from the painful experience of the previous downturn when positive trends in income and employment quickly evaporated as the crash took hold.

Four of the five main components of the KBC Irish consumer sentiment were lower in September than in August. The only element to improve was consumers’ assessment of the buying climate which rose marginally. Our sense is that this reflects still broadly positive dynamics in terms of employment and wage growth in the Irish economy at present together with strong promotional offers as businesses try to entice a consumer who in many instances, may be able but is not entirely willing to open the purse-strings at present.

The September survey saw a broadly similar weakening reported in the two elements related to broad economic conditions and the two related to household finances. This outcome appears consistent with the idea that all elements of the survey are being seen through the same darkening prism.

Whether Irish consumer sentiment has now reached peak Brexit gloom depends how still volatile political conditions in the UK develop and how related decisions translate into economic outcomes in the months ahead. This implies Irish consumer sentiment and the broader Irish economy may be approaching a pivot point that will see sentiment and spending growth deviate materially from their current paths and either rise or fall markedly depending on the course Brexit takes and the response of Irish and EU policymakers.

The Irish Government has decided reasonably to frame Budget 2020 on the basis of a ‘no deal’ Brexit. Such caution is entirely appropriate but how that translates into measures and message to be delivered next week is not altogether clear-cut. Irish consumers will likely look for signs that the economy and the public finances will not be devastated in the way they were eleven years ago.

However, this requires striking a balance between prudence and panic. If already Irish nervous consumers feel that even minimal adjustments to income taxes and welfare rates are no longer affordable, there may be some risk that they cut their own spending plans. If, instead, even some very limited support is provided, this might encourage the view that Brexit might prove hard but not hopeless.

Quite apart from the signal sent by Budget 2020 is the issue of financial support to significant numbers of hard-pressed Irish households. While  most conventional indicators paint a picture of a solidly improving Irish economy, the sentiment survey suggests that many consumers are still reporting significant financial pressures. Indeed, for the first time since February 2017 , the September survey found more consumers felt their household financial circumstances had worsened rather than improved through the past twelve months.

In such circumstances even modest adjustments to income taxes and welfare rates may make a notable difference to the financial wellbeing of many Irish households. As the table below indicates, a supplementary question in the KBC consumer sentiment survey for September found that one in four Irish consumers say that, budget adjustments to income taxes and social welfare benefits are ‘critically important’ to their financial circumstances while almost half feel  they are quite important. So, roughly three in four Irish consumers will be looking to Budget 2020 for some help in making ends meet in the year ahead. A budget that disappoints in this regard could hurt rather than help the Irish economy in 2020.

Preliminary findings from the forthcoming KBC homebuyer sentiment survey also shed some light on the importance of the Government’s ‘help to buy’ scheme which is to be reviewed in Budget 2020. As the table below indicates almost half (46%) of prospective homebuyers feel they would be negatively affected if the help to buy scheme were to end, with 14% saying it would prevent them from purchasing a home and a further 32% saying it would worsen their homebuying prospects. In contrast, some 9% of would-be purchasers say the ending of the scheme would help their purchase prospects (presumably because it would improve their purchasing power relative to those relying on the scheme). 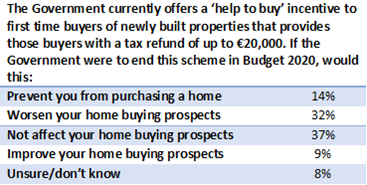