Irish consumer sentiment edged lower in October, continuing the pattern of ‘one and a half steps forward, one step back’ that has characterised the monthly sentiment survey readings for the past year or so. As diagram 1 below indicates, the monthly change in the sentiment index in October was the smallest thus far in 2017. This suggests no major change in thinking on the part of Irish consumers in the past month.

At the margin, the view that Budget 2018 would offer little in the shape of ‘giveaways’ may have weighed on views on household finances but, in general, the broad trend in consumer sentiment  remains reasonably positive and consistent with an Irish economy that is experiencing an ongoing but uneven upswing.

As income growth is still modest for most households and significant uncertainty persists about future prospects, it remains the case that caution rather than confidence is the key influence on Irish consumer behaviour at present. As a result, any increase in household spending in the key final months of 2017 is likely to be healthy rather than huge. 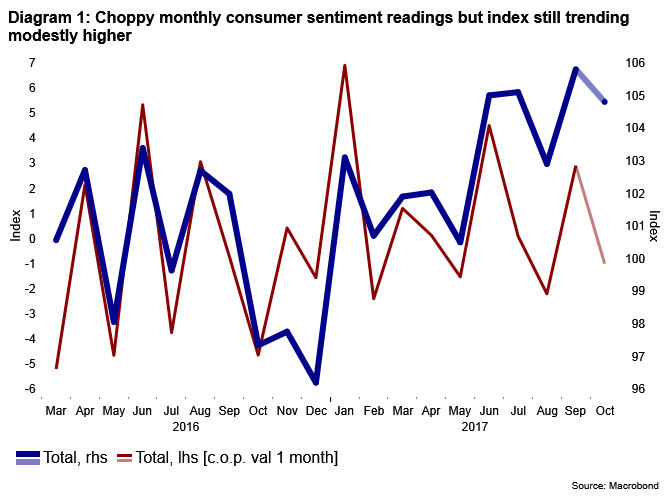 The little changed Irish sentiment reading for October contrasted with notable gains that took similar indicators for the US and the Euro area to fresh multi-year highs last month. In the US, consumer sentiment posted its highest reading since Jan 2004 on upgraded views of household finances and the broader economy. Greater optimism regarding a strengthening economic upswing, particularly on the part of consumers in Germany, Austria and Benelux countries, was the main driver in boosting Euro area consumer confidence to its strongest level since April 2001.

While UK consumer confidence weakened somewhat in October, the main driver was a poorer economic outlook as views on household finances improved slightly. Hence, the factors influencing sentiment last month here and in our near neighbours were somewhat different even if both surveys moved in the same direction.

We don’t think the slight drop in Irish consumer sentiment in October marks any significant change in thinking on the part of Irish households but the contrast with the US and Euro area readings highlights the lack of a self-reinforcing ‘feel-good’ factor in the Irish economy that  would drive confidence consistently higher. This reflects both the shadow cast by forces such as ‘Brexit’ on the macro outlook and the scarring, both financial and psychological, that remains from the financial crisis.

On balance, the ‘macro’ elements of the October sentiment survey improved modestly in October reflecting a series of supportive economic releases that highlighted ongoing strength in activity, employment and demographics. These official data likely chimed with a continuing sequence of new job announcements to underline key and continuing strengths of the Irish economy.

Following the clear improvement seen in the September survey, there was a modest correction in consumers’ views of their personal financial circumstances in October. It remains the case that positive views on household finances remain clearly higher than negative views for all three related elements of the survey.  However, all three saw a small weakening compared to their September levels.

Our sense is that a strong and sustained emphasis on the limited room for manoeuvre in Budget 2018, that was progressively stepped up in the run-up to Budget day, prompted a small pull-back in consumers’ assessments of their household finances and their spending plans in the October sentiment survey (some 70% of last month’s survey interviews were taken before Budget 2018 was presented).

In our commentary on the September survey, we had noted that there was little expectation of any substantial largesse in Budget 2018 but in the days and weeks immediately preceding the Budget there was considerable media coverage that emphasised the practical implications of fiscal constraints in terms of the modest impact any tax/welfare changes were likely to have on weekly spending power.

In circumstances where improving job market conditions are primarily seen in increased numbers in work rather than marked increases in pay on a broad basis, it remains the case that changes in taxation and social welfare exert an important influence on many Irish households’ spending power.

The run-up to Budget 2018 that saw significant media coverage suggesting fiscal changes would add no more than a couple of Euro per week to household spending power could have focussed attention on continuing pressures on many households’ finances. The limited scale of the correction in views on personal financial circumstances implies the October sentiment survey reflects a mild disappointment rather than a marked change in Irish consumer thinking.

In the absence of a marked improvement in household spending power or dramatic developments that might materially alter the economic outlook, monthly sentiment readings may continue along the current choppy path. However, the underlying trend remains modestly positive and, as diagram 2 illustrates, appears consistent with expectations for a solid increase in consumer spending rather than a surge in the remaining months of 2017 and into 2018. 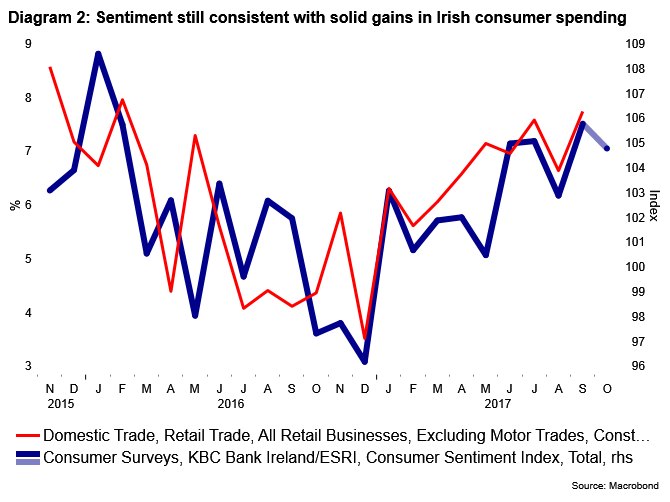