Irish consumer sentiment improved marginally in August as ‘opening up’ optimism built but the mood remains relatively guarded in what remains an uncertain environment. The gains in the August survey largely reflected improved ‘macro’ developments with little follow-through and this may suggest the continued absence of any broadly based  ‘feel-good factor’ in terms of household finances.

That said, the gains in Irish consumer sentiment should be viewed as encouraging in the context of weaker confidence readings in the US, the Euro area and the UK in August.  The comparatively cautious tone of Irish consumer confidence readings through the past year and a half coupled with a strong vaccination uptake likely explain the contrast between the slight increase in the Irish survey in August in contrast to declines elsewhere.

The KBC Bank consumer sentiment index increased to 86.5 in August from 84.9 in July, largely but not entirely reversing last month’s drop from the two-year high of 87.2 recorded in June. At current levels, the survey suggests Irish consumers are gradually if unevenly putting the extreme worries of the past couple of years-fueled first by Brexit and then the Coronavirus - behind them. However, with the Delta variant at least partly offsetting the impact of the roll-out of vaccinations and the contours of the post-pandemic Irish economy still unclear, consumers here appear relatively wary in their response to a generally improving situation.

The rise, albeit marginal, in Irish consumer sentiment in August contrasted with modest declines and weaker than expected outturns in confidence indicators for the Euro area and UK, and a more pronounced fall in the most comparable survey for the US. As the diagram below illustrates, the weakness in Irish consumer sentiment through the past couple of years has been more pronounced than in the US and more protracted than in the Euro area. 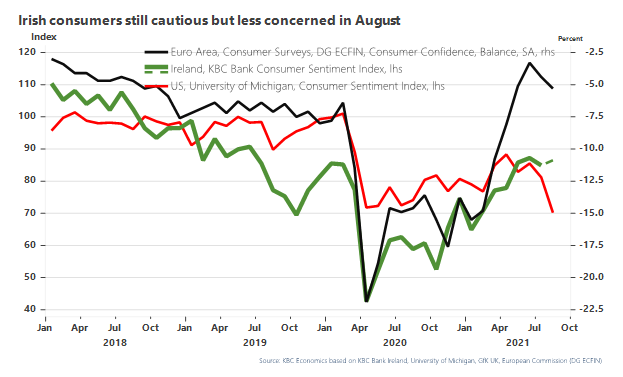 While the fall-out from the pandemic has been global in nature, Brexit-related concerns have been an additional source of concern for Irish consumers. Our sense is that the ‘underperformance’ of Irish consumer confidence through the past couple of years owes much to the recent and painful legacy of the financial crisis that likely fostered greater nervousness in Irish consumers in relation to the potential economic fall-out from than the pandemic than in their counterparts in many other countries.

Moreover, an increase in unemployment that in comparative terms has been large and lasting over the past eighteen months may have encouraged fears of permanent ‘scarring’ of jobs prospects on the part of Irish consumers. In this context, Euro area unemployment stood at 7.7% in June 2021, only modestly up from 7.4% in February 2020. The latest data show US unemployment has fallen notably back to 5.4% in July 2021 after a dramatic initial increase from the historically low 3.5% rate seen in February 2020. Irish unemployment rose from 4.9% in February 2020 to stand at 6.5% in July 2021 while the Covid-adjusted measure was still at an elevated 13.5% although well below its initial peak.

Our sense is that the comparative ‘outperformance’ of Irish consumer sentiment in August is partly the result of greater caution in previous readings and partly a reflection of particular drivers elsewhere such as disappointing vaccination uptake amid the increase in the delta variant , sharp price increases in many vacation-related goods and services and the looming end of some income supports in the US. In the same vein, severe weather events in various countries, increasing Covid cases and a range of country-specific issues in the Euro area may have influenced sentiment readings.

The strongest areas of the Irish consumer sentiment reading for August were in relation to the general economic outlook and job prospects in particular. While employment concerns have weighed on Irish consumers thinking for some time, the return to work triggered by an easing in relation to restrictions on the hospitality sector likely encouraged some improvement in this respect. A continuing sequence of new job announcements and positive trends in official unemployment data should have also contributed in this regard.

The outlook for jobs may also have been boosted by the promise of supportive fiscal measures announced in the Summer Economic Statement and by upward revisions to economic growth data and forecasts. These developments alongside the broadening of recovery prospects offered by opening up measures likely also underpinned an improvement in consumer thinking in relation to the broader Irish economic outlook that also registered a clear improvement in August.

Although improvements in the broad economic environment might be expected to translate into healthier household finances, the link is far from automatic. As a result, the changes in those areas of the survey focused on personal financial conditions were more limited and mixed.

Consumers were modestly more negative about the manner in which their financial circumstances had developed through the past twelve months. One element in this is recent increase in price pressures in a range of areas. However, a likely more important issue is the damage to household incomes from the pandemic-related hit to activity. While substantial fiscal support has offset the aggregate impact and much of the effects on individual households, the uneven nature of the pandemic fall-out is likely to have weighed on the financial circumstances of a range of households.

Although the opening up of the economy should lead to gains in household incomes, uncertainty about the speed at which this might occur relative to the removal of fiscal supports may have tempered expectations of improvements in personal financial circumstances in the coming twelve months, prompting only a marginal gain in this area of the survey in August.

More generally, there is a strong sense in the survey that an easing in pandemic related economic pain is underway but Irish consumers don’t feel a further step towards increased prosperity will automatically follow. Roughly 15% of consumers expect their own circumstances to improve in the next twelve months and a broadly similar number envisage a deterioration, implying that some 70% of consumers see their living standards remaining unchanged in the year ahead.

This result appears entirely consistent with the cautious tone of the survey in general and our judgement that it will lead to a decent rebound rather than dramatic gains in household spending. That verdict also mirrors the slight increase in the buying climate in the August survey that falls short of some expectations for a sustained sharp increase in consumer spending.