Irish Consumer Sentiment slides rather than slumps in January

Drop in Irish consumer confidence sharper than elsewhere but…..

….drop notably smaller than might have been feared given surge in virus

Does survey suggest Irish consumers have increased capacity to live with Covid?

Could this imply greater scope for policy interventions to reboot economy later in 2021?

Irish consumer sentiment fell sharply in January, reversing the gains seen in December. In light of the sharply increased incidence of the virus and a related increase in health-related restrictions, it is scarcely surprising that consumer confidence tumbled in January.

Although the drop in sentiment in Ireland was clearly larger than in many other economies, it can still be argued that the decline here may be  somewhat smaller than might have been feared. It could be that expectations of the roll-out of vaccinations coupled with a greater economic capacity to live with the virus acted to curb the extent of the fall in Irish consumer confidence in January.

The KBC Bank Irish consume sentiment index dropped to 64.9 in January from 74.6 in December, the 9.7 point drop in the index was marginally greater than the 9.1 increase reported in December. The current level of the sentiment index is in line with the average of the index through 2020 (65.0) but remains above the levels recorded each month between April and October. So, it may be reasonable to suggest that sentiment slid rather than slumped in January. Not surprisingly, however, Covid concerns mean the January 2021 reading was well below the 85.5 reading for January 2020 (which was the highest seen last year).

The drop in Irish consumer sentiment in January was relatively large in comparison to that seen in other countries. In the US, the comparable indicator slipped from 80.7 to 79.2, for the Euro area the fall was 1.7 points to -15.5 and in the UK -28 from -26.

Our sense is that the relatively modest declines elsewhere reflect optimism about the Vaccine roll-out as well as specific ‘domestic’ factors such as expectations in relation to a large additional fiscal stimulus in the US. In addition, as we noted previously, Irish consumer sentiment tended to be more responsive to virus developments than elsewhere through 2020 likely reflecting both the intensity of awareness of such developments and 'scarring' from the previous economic downturn.

In relation to the January 2021 sentiment reading for Ireland, we feel hopes for a vaccine-driven improvement in the outlook played some positive role. The agreement of a Brexit deal may also have assisted to some extent by removing the very near term risk of a ‘cliff edge’ move to tariffs and increased trade tensions. However, compared to most other economies, the change in the momentum of the virus and related restrictions on economic activity was particularly sharp in Ireland between the December and January sentiment survey periods.

As the truncated diagram below illustrates, the initial ‘lockdown’ period entailed a sharp drop in the sentiment index as consumers adjusted their thinking on the outlook for the economy and their own household finances. The easing in the virus through the summer produced a relatively modest rebound in sentiment as uncertainty and fears of economic and financial ‘scarring’ remained to the fore. The ‘second wave’ of the virus through September/October similarly produced a more muted adjustment in sentiment than seen through the first wave as economic and financial supports remained substantial and hopes for the development of successful vaccines grew.

The reduced incidence of the virus through November and early December drove a modest rebound in sentiment. While the index remained well below pre-pandemic levels, Irish consumers responded to expectations that a post-pandemic world would emerge during the course of 2021.

However, it is scarcely surprising that sentiment weakened in January in response to the explosive trajectory of the virus in late December and the associated ramping up of health-related restrictions. The diagram below is truncated because the axis values needed to show the increased incidence of Covid cases over the year end period would have obscured the relationship between the sentiment index and the virus through 2020. The January 2021 Irish consumer sentiment index suggests that Irish consumers are not simply responding mechanically to  the virus incidence in mapping their economic future. 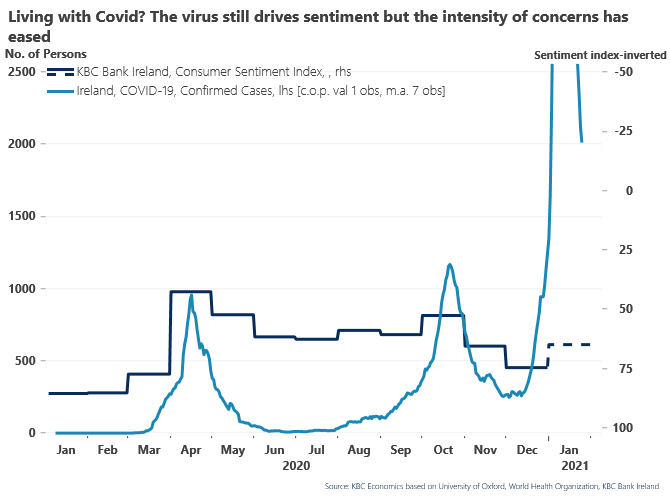 Instead, it might be suggested that consumers are assessing the current elevated virus readings in the context of both the greater than expected resilience of the Irish economy and associated positive household income developments. Through the survey period, statistical releases for the third quarter suggested that, contrary to expectations, Irish GDP and household disposable incomes would post positive out-turns for the year 2020.

While we don’t think consumer think is entirely framed by official indicators of the ‘macro’ climate, the likelihood is that both consumer sentiment and recent statistical releases are signalling that the impact of the pandemic on the Irish economy has at least thus far been a good deal less awful than feared.

To assess whether the delivery of a Brexit deal might have influenced the January sentiment reading, we added two additional questions concerning Brexit to the January survey. The first found that 35% of consumers felt the agreement reached in late December between the EU and UK had lessened their concerns about the economic outlook whereas a marginally larger 40% didn’t feel the deal had eased such concerns.

More generally, the responses to a second question give some sense as to the extent to which virus concerns dominate Irish consumer thinking at present. As the table below indicates, the vast majority of consumers are primarily focussed at present on Covid-19 rather than Brexit. While this is not surprising, it should be seen in the context of the substantial depressing influence of Brexit on Irish consumer confidence in the years since the referendum and the responsiveness of sentiment to fluctuations in the prospect that a deal might or might not be reached through the 2016 to 2019 period. Reflecting this, the table suggests some variation in the extent to which the pandemic has caused Brexit concerns to be set aside.

While Covid concerns remain the dominant influence on the mood of Irish consumers, as noted above, we also think the survey suggests consumer thinking in relation to the economic and financial consequences of the pandemic is continuously evolving rather than static.In this regard, the diagram below suggests the drop in sentiment of late has been less pronounced than might have been suggested by the drop in retail and recreational mobility.

This points to the possibility of increased consumer resilience and a greater capacity to live with the virus. In turn. this might hint that nuanced policy interventions may have the capacity to boost sentiment and spending and, consequently, activity and employment in domestically focussed economic sectors as the year develops. 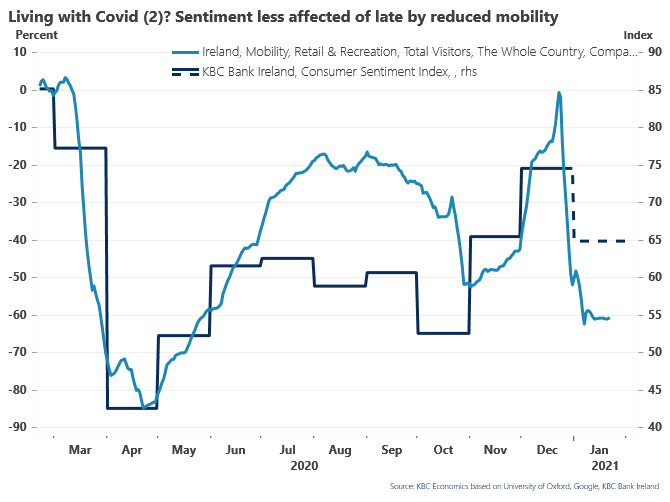