Irish consumer sentiment fell sharply for the second month in a row in April as concerns about living costs intensified and worries around the outlook for economic growth gathered momentum.

In contrast to the drop in confidence seen in the March survey where ‘macro’ nervousness dominated, the weakest elements of the April survey were those focussed  on household finances and spending, suggesting increasing strains in making ends meet.

The KBC Bank Ireland consumer sentiment index fell from 67.0 in March to 57.7 in April. The index now stands some significant distance below its long term average of 86.6, signalling a very nervous Irish consumer at present.

The 9.3 point drop in the sentiment index is very similar to the 10.0 point seen between February and March. The declines in the index in recent months represent  unusually large moves for the survey and signal a marked change in the thinking of Irish consumers of late.

Indeed, the cumulative 24 point decline in the survey over the three months from February to April is the second largest in the twenty six year history of the survey, exceeded only by the collapse in sentiment as Covid 19 closed down the economy in the spring of 2020.

Irish consumers more nervous than US consumers in April

The further decline in Irish consumer sentiment in April contrasted with an unexpected improvement in the preliminary reading of its US counterpart as the diagram below illustrates.

A pronounced weakening in US  consumer sentiment that began in the summer of 2021 reflected an earlier, speedier and somewhat larger increase in inflation in the US than in Ireland. March 2022 data show US consumer prices up 8.5% y/y compared to a 6.7% y/y increase in Irish consumer prices. However, the diagram below suggests Irish consumers have now become more gloomy about their circumstances than their US counterparts. 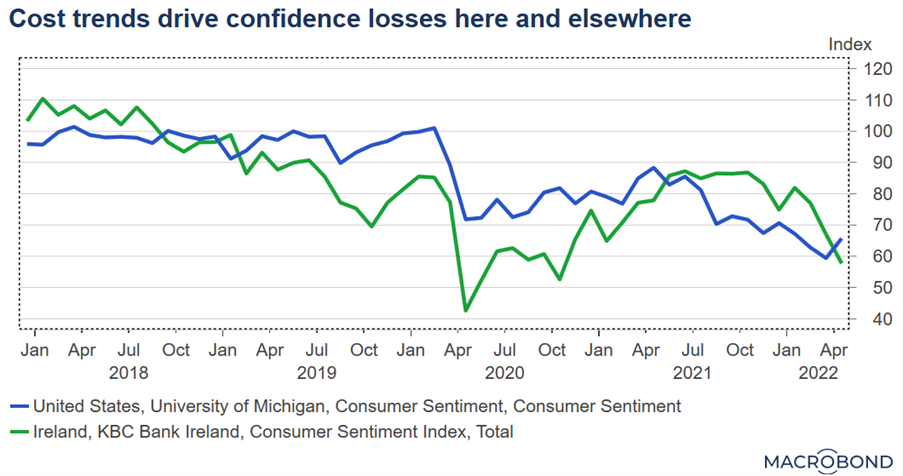 The bounce in US sentiment in this month is attributed to a recent easing in petrol prices in the US partly due to the release of oil from the US Strategic Petroleum Reserve allied to a strengthening trend in US wage growth of late. In addition, the direct fallout to the US economy from war in Ukraine is seen as notably smaller than to the European economy.

For Irish consumers, the prospect of a larger and longer lasting surge in living costs coupled with the horrific human and social consequences of war in Europe has understandably cast a dark shadow over recent sentiment readings. As a result, the April survey saw large declines in all of the five elements of the sentiment index.

As in March, Irish consumers became increasingly worried about the broad ‘macro’ outlook. Seven out of ten consumers expect the Irish economy to be weaker in twelve months’ time while nearly half expect unemployment to be higher.

Unlike March, the weakening in expectations for the jobs market was slightly larger than for general economic prospects. We think that this may be related to a marked worsening in consumers’ assessment of their own spending power and the implications that may have for jobs.

In contrast to the March reading, the most pronounced weakening in the April sentiment survey was in those elements focussed of consumers’ own spending power and spending plans. In light of the pronounced upward pressure on energy costs, both actual and announced, as well as markedly increased concerns in relation to food prices, it is scarcely surprising that there was a marked downgrade both of the trend in household finances through the past year and the outlook for the next twelve months.

A more threatening development was a marked pull-back in consumer spending plans following a slight but surprising improvement in this element of the survey in March.  The April ’22 purchasing climate is the weakest since the Covid-closedown related results for April and May 2020 and among the lowest readings for this component in the survey’s twenty six year history. Significantly, this may hint at a marked pull-back in consumer spending that is both forced and fear-driven.

In turn, this might suggest little further positive momentum in Irish consumer spending through most of 2022. In circumstances , where household spending power is expected to fall in inflation-adjusted terms, this is not entirely surprising but it suggests the broader Irish economic temperature through the summer and beyond may feel a good deal cooler than might be inferred from most mainstream forecasts (our own included).

Special question; how would Irish consumers handle a financial emergency?

As was the case in 2020 and 2021, the April 2022 consumer sentiment survey included an additional question focussed on households capacity to weather a financial emergency.  This is based on a similar question asked in the regular ‘Report on the Economic Well-Being of U.S. Households’ conducted  each year by the US Federal Reserve.

The responses given by Irish consumers to the question ‘How would your household deal with an unexpected financial emergency costing €1000?  In the April 2022 sentiment survey are shown in the diagram below alongside the responses given in the previous two years.

In broad terms, the results suggest no dramatic changes in the financial circumstances of Irish consumers through recent years. However, the details suggest some weakening compared to a year ago that likely reflects both the recent sharp rise in inflation and the drawdown of savings built up in the pandemic.

These survey results suggest that financial wellbeing continues to vary markedly across Irish households. Whereas some 12% of consumers say they could deal with an unexpected financial  cost of cost amounting to €1,000 out of their current income, as many as 7% say that they could not handle such an expense through any funds or financial capacity available to them.

The 7% of households who say they could not handle a financial emergency of this scale in 2022 is somewhat smaller than the portion of US Households giving similar answers (some 12% of US households said they could not handle a $400 emergency in 2021). However, it still implies a significant number of Irish households would face a major struggle to replace a major electrical appliance or handle significant motor or home repairs.

Moreover, the portion of consumers unable to handle a financial emergency amounting to €1000 in 2022 is marginally up from the 6% who indicated they could not handle such an emergency in 2021 although down from the 9% who gave this response in 2020. This hints that the gains from a relatively strong Irish economy have been uneven in recent years.

The most common recourse across Irish households to an unexpected financial difficulty would be to draw on savings but, at 34% in 2022, this is slightly smaller than reported in 2021, possibly suggesting that, for some households, savings built up during the pandemic have been significantly depleted.

Compared to previous years, slightly more consumers would borrow from a bank or credit union  and, compared to last year, there is also a slight increase in the number who say they would borrow on a credit card to fund such an expense. Again, this suggests many Irish households have very limited ‘safety nets’ against any unexpected financial difficulties.