July index up marginally to strongest reading in 17 months

The KBC Bank/ESRI Consumer Sentiment Index stood at 105.1 in July, effectively unchanged from the June reading of 105.0 but that marginal increase – which isn’t statistically significant- means last month’s results were the strongest since February 2016.

This is an encouraging result and one that is consistent with the positive trajectory of most recent Irish economic indicators. However, we would caution that the onset of back to school and other seasonal costs, coupled with likely efforts to downplay the scope for positive news in the upcoming Budget 2018 means there may be scope for somewhat weaker sentiment readings in coming months.

The positive Irish sentiment reading for July contrasted with weaker results for comparable surveys elsewhere as consumers in these jurisdictions re-evaluated their situations and prospects. In the case of Ireland, our sense is that Irish consumers had braced themselves for some fallout from Brexit and/or changed US economic policies but the first half of 2017 has proven notably less traumatic for the Irish economy than may have been feared. However, in other countries, earlier hopes may have given way to varying degrees of disappointment of late.

In the US, consumer sentiment continued the trend decline of recent months away from the January ‘Trump honeymoon’ peak as consumers continue to revise down expectations both for the economy and their household finances in spite of relatively healthy current economic conditions.  In the Euro area, July saw a slight correction of the strongly improving recent trend with a softer French reading hinting that notably increased optimism about political progress has run well ahead of the current circumstances of most consumers.

In the UK, a further drop in consumer confidence last month to the lowest level since the Brexit vote appears to reflect weaker economic conditions of late and the particular erosion of household spending power through higher inflation. As a result, this July’s result implies that earlier consumer optimism about UK economic prospects now seems to be undergoing a marked re-assessment.

While the headline Irish Consumer Sentiment Index for July was little changed from June, there were some contrasting movements in the key components of the survey. After a notable improvement in the June survey, the two principal ‘Macro’ elements of the July survey held broadly steady in July. In recent months, Irish consumers appear to have taken on board a continuing sequence of better than expected indicators and upwardly revised forecasts for the Irish economy.

As a result, the Irish economic environment in mid-2017 while still beset by uncertainty appears far less immediately threatening than previously envisaged. This translates into positive views on the Irish economic outlook outnumbering negative views by three to one in July whereas the split was two to one six months ago and somewhat less than that twelve months ago.

While Irish consumers remained more confident about the general economic outlook and the prospects for employment in July, they were a little more cautious about their own personal finances than in June. Our sense is that this reflects limited income growth and the perception that they are not sharing adequately in the widely heralded economic recovery. The monthly changes in this area of the survey were modest in July but they show a modest drop in numbers reporting stronger household finances in the past year and a slight increase in numbers expecting weaker household finances in the coming year.  It remains the case that only about one in four consumers are reporting improvements in their past or future financial circumstances. 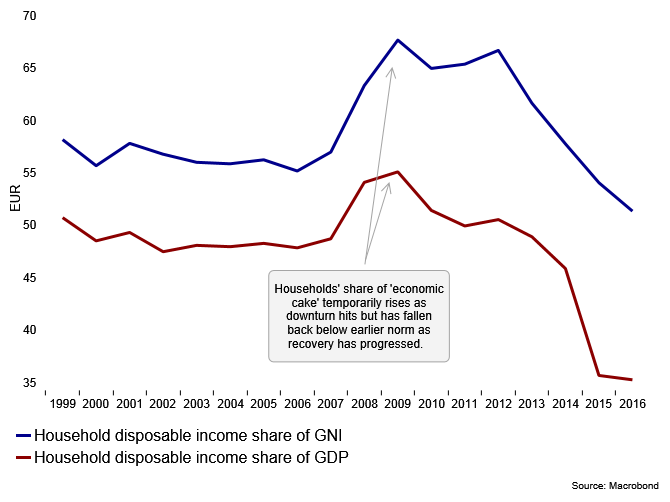 In such circumstances, it may seem slightly surprising that the most positive element of the July sentiment survey related to spending plans. We think this reflects a response to further price discounting in summer sales as well as planned spending on summer holidays. As such, we think this pick-up is likely temporary in nature and we would expect some pull-back in this area of the survey in coming months.

That said, we take the view that the spending plans component of the July survey may be picking up some key elements of the ‘new normal’ for Irish consumers. One element is a tendency towards ‘compressed’ spending for big ticket items that means such purchases are increasingly concentrated at sale time or in response to heavy price discounting.

Of course, this pattern is also consistent with the reality that many households have a relatively fixed amount of money income and how far that goes each month depends on price movements. Either way, these developments speak of a notably increased price sensitivity on the part of Irish consumers in recent years (a trend that shows up statistically in a notably increased negative correlation between monthly price and volume changes in retail sales data).

A second aspect of the ‘new normal’ appears to be increased travel related spending. The bounce in spending plans may partly be due to lower costs- according to CSO, June air travel costs were 7.6% lower than a year earlier. As a result, it may be vulnerable to a correction in the August data as air fares rebounded in July to stand 1% higher than a year ago.

We don’t think cost factors fully explain an increased tendency towards travel related spending of late. It may signal a greater level of confidence on the part of consumers that the Irish economy and household finances are on a more sustainable trajectory. Of course, it may also speak of a broader change in consumer preferences that places increased emphasis on getting a break from circumstances that are still challenging for many Irish households.