Do June sentiment data hint growth pessimism could be overdone?

Irish consumer sentiment showed a further substantial improvement in June as the easing in health restrictions in Ireland and elsewhere has lessened fears about the economic outlook and job prospects but consumers remain very concerned about their current personal financial circumstances. As a result, the June outturn remains some significant distance below pre-pandemic readings for Irish consumer sentiment.

The details of the June sentiment survey suggest some risk that the behaviour of consumers, some cautious and others cash-strapped, may serve to limit the scale and speed of a turnaround in activity and employment. Such concerns would support arguments for an early and ambitious fiscal stimulus to both signal and support a recovery that minimises lasting damage from Covid-19 to the Irish economy.

The KBC Bank Irish consumer sentiment index climbed to 61.6 in June from 52.3 in May and while this represents a marked improvement from the recent April low-point of 42.6, it remains some considerable distance from February’s pre-pandemic reading of 85.2 or even the initial sense of an emerging threat that was reflected in the March reading of 77.3. As such, the June survey suggests consumer confidence is clearly recovering but, at current levels, it suggests Irish consumers remain worried and wary.

The pick-up in Irish consumer sentiment in June mirrors gains in similar indicators for the US, Euro area and UK. In each  case, the improvement in the latest reading is substantial but leaves the confidence measure materially below the pre-covid-19 level.

The diagram below indicates that the pandemic initially had a much greater negative impact on the thinking of Irish consumers than on their US counterparts. (The initial drop was somewhat smaller in Ireland than that seen across the Euro area refecting the intensity with which the virus spread ina niumber of countries). However, the improvement through May and June has been larger in Ireland than in the 'States in spite of the fact that US restrictions were eased faster and supportive US fiscal and monetary actions have been much more aggressive. 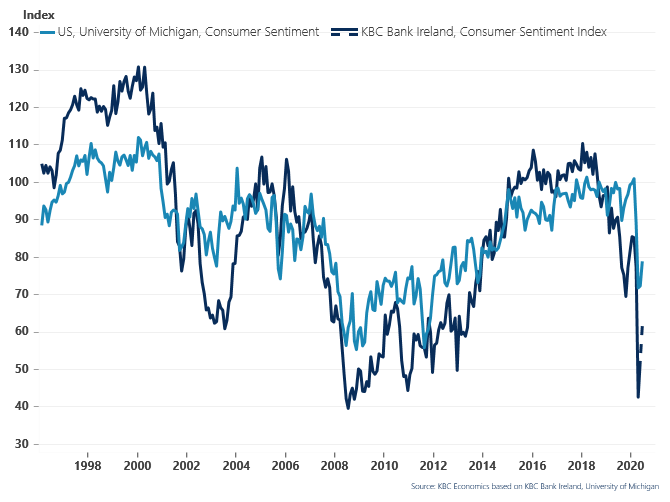 The different pattern of responses of US and Irish consumers may reflect an inherently greater sensitivity to negative developments on the part of Irish consumers.  In turn, this suggests that some degree of financial and psychological ‘scarring’ from the crisis of a decade ago is still colouring the thinking of significant numbers of Irish consumers.  An approach based on ‘worry first and watch to see if it is warranted’  could translate into a cautious and constrained recovery in Irish consumer spending later in 2020.

On a positive note, the details of the June sentiment survey suggest Irish consumers have become clearly less negative about the outlook for the Irish economy and prospects for jobs as ‘lockdown’ measures eased here and elsewhere. So, while the reflex response of Irish consumers may be to focus on emerging risks to the downside, they are not entirely blind to positive developments. Hence the signalling role that a fiscal stimulus might play could give significant support to sentiment and spending through the autumn.

As was the case in May, the ‘macro’ elements of the survey led the improvement in June. These stronger ‘macro’ elements survey readings are partly technical and stem from the fact that the relevant questions on economic conditions and jobs are forward-looking in nature. As it is widely believed that the most negative economic consequences of the pandemic are now being felt, the outlook for the economy reflects an almost mechanical expectation that conditions should be better rather than worse in twelve months’ time.

More fundamentally, the survey period saw initial moves to re-open the Irish economy and more advanced developments in that direction in many others. There were also a number of data releases on economic growth, employment and tax receipts that painted a less negative picture than several recent very gloomy economic forecasts. (One can argue whether or not these forecasts are realistic, the point here is that, from the perspective of the Irish consumer, they conveyed a message of large and lasting economic difficulties).

Encouragingly, the nature and scale of improvement in responses to ‘macro’ questions in the survey since the April low-point reflected broadly equal declines in negative responses and increases in positive responses. This might suggest a continuing movement away from an initial reflex judgement of severe and sustained economic problems. While we highlight what we think is a significant shift in the thinking in Irish consumers in this regard, it should also be emphasised that the June survey results still reflect an overwhelmingly negative view on the outlook for the economy and employment.

Responses in June to questions on household finances were more nuanced. There was a significant improvement in expectations for household finances a year from now but, again, this needs to be seen in context. Only one in twenty consumers envisages better financial circumstances through the next twelve months whereas one in three expects a deterioration. Moreover, unlike the broadly balanced changes in ‘macro’ responses since the April survey low-point, an easing in negative expectations was twice as important as an improvement in positive responses to the change in thinking about future financial circumstances.

The same sort of drivers- an easing in fears for the worst rather than a marked pick-up expectations for the best were seen in the improvement in consumer thinking on the buying climate. Since the April low-point, a drop in negative responses has been four times as important as the rise in positive responses to the change in this element of the survey. So positivity remains in very short supply in relation to consumers’ views on their financial circumstances.

Our inclination to argue the case for caution is supported further by consumers’ assessments of the way their financial circumstances had evolved  through the past year. This element  of the survey was effectively unchanged in June from the May reading. In one respect, this result was almost a foregone conclusion; developments through the most recent survey period haven’t  materially changed circumstances for the better for many consumers.

It remains the case that negligible numbers report an improvement and more than one in three (albeit fractionally fewer than last month) suggest their household finances have worsened through the past year. Again, in very broad terms, this is consistent with the broadly based worsening of financial circumstances for significant numbers of Irish households since the pandemic struck.

While fading fears should support stronger spending, there is still a sense in these data of an Irish consumer who will remain cautious even if they are willing to queue. In this respect, we think it is entirely consistent that, after a protracted period in which shopping was severely curtailed, the re-opening process sees some element of pent-up demand being released. The question is whether buoyancy proves short-lived or marks the start of a surge. 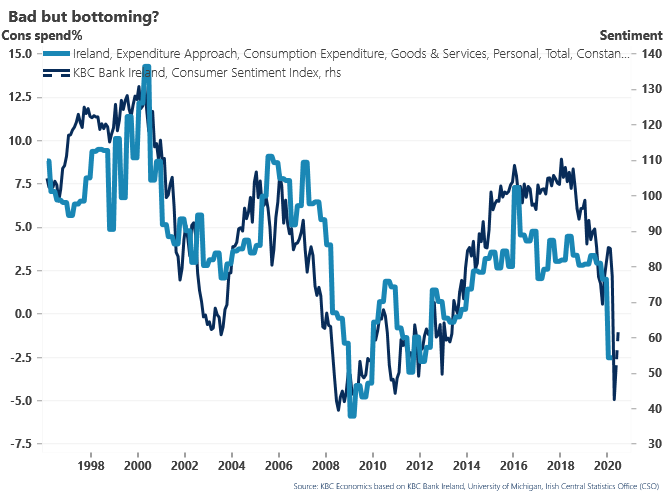 In summary, we would tend to highlight the significant further improvement in Irish consumer sentiment in June as pointing to a somewhat less negative outlook for the economy. However, the cautious tone of responses to questions on personal finances suggests a still fearful and, in many instances, financially damaged Irish consumer. To set sentiment and spending on a solid rather than a shrunken trajectory, we think the survey emphasises the need for an ambitious and early fiscal stimulus to limit the lasting damage of Covid-19 to the Irish economy.