Little sense that ‘giveaway’ budget is expected but will next week's measures support sentiment?

Irish consumer sentiment recovered in September after August’s modest decline, signalling that confidence among Irish households remains on a positive if somewhat uneven path. While the monthly increase in the sentiment index of 2.9 points was not particularly large, it was sufficient to push the September sentiment survey to its strongest level since February 2016.

We would emphasise the positive nature of the September sentiment reading but would interpret this as pointing towards some easing in fears and emerging optimism rather than the arrival of euphoria. The September survey suggests that Irish consumers now see the economic glass as half full. It does not imply they see themselves at a party where the punchbowl is overflowing.

As the red line in diagram 1 below illustrates, monthly readings on Irish consumer sentiment have been fairly ‘choppy’ in recent years reflecting the uneven nature of the Irish economic upswing and the degree of uncertainty  that surrounds developments such as Brexit.

Diagram 1 also suggests that this year has seen a gradual unwinding of the nervousness that followed the UK’s decision to leave the EU as a feared sharp, speedy and broadly based deterioration in Irish economic conditions failed to materialise. Instead, the evidence to this point suggests that the Irish economy has remained on a solid growth trajectory thus far in 2017.

Significant risks still cloud the global environment and, for the average Irish household, income gains have been limited. Indeed, a notable feature of the upswing is that jobs growth continues to outpace wage growth even though the unemployment rate has fallen considerably. So, the labour market improvement has been jobs intense but not felt extensively in the shape of notably faster wage growth to this point.

As a result, the improvement in consumer sentiment has been modest and somewhat erratic in terms of its monthly path. In that respect, the sentiment survey suggests that from the perspective of the average consumer, the Irish economy is clearly improving but it still feels undercooked rather than overheating. 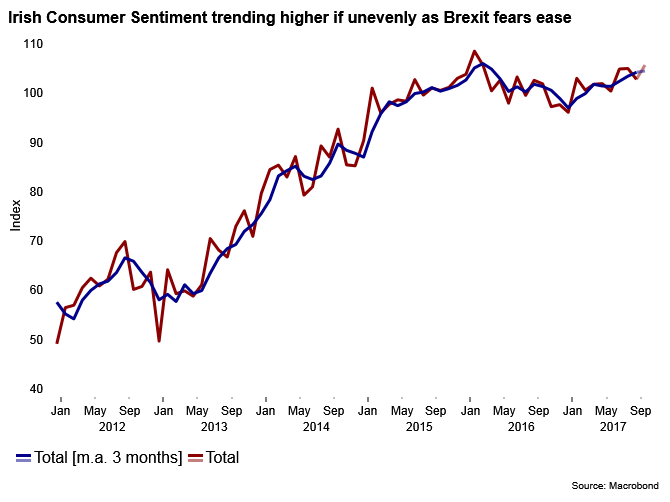 A number of factors may explain the monthly rise in Irish consumer sentiment in September which was concentrated in those parts of the survey focussed on household finances. One influence could be the early September confirmation that the repayment of water charges would be largely completed before end-year. In circumstances where cash flow is still constrained for many households, this development might be expected to prompt a more positive assessment of personal financial circumstances.

We also think that a sharp increase in the exchange rate of the Euro against both Sterling and the US Dollar through August may have increased perceptions of household purchasing power.  Such currency considerations could also be consistent with a slightly less positive assessment of the broader outlook for the Irish economy last month.

A divergence in thinking as to the ‘macro’ and personal implications of an economic development is unusual but we think  the better than feared experience of the past year may have made Irish consumers less inclined to mechanically downgrade the outlook for their household finances in response to a stronger Euro exchange rate (Interestingly, the September UK  consumer confidence reading showed consumers there less optimistic about their household finances but slightly less negative about the economic outlook, a set of outcomes that could be consistent with the contrasting  impact of a weaker Sterling on UK spending power and competitiveness) .

The details of the September survey show four of the five main components recording stronger readings than in August. However, there was a modest decline in expectations for the general Irish economic outlook although it should be added that the September reading is still very positive. Our sense is that this likely owed something to concerns about the impact of a stronger exchange rate as the limited number of economic releases and forecasts through the survey period were broadly positive. This result may also have partly reflected a correction following a particularly strong reading in this element of the survey in August.

A continuing fall in unemployment and a pick-up in annual earnings growth in official data, coupled with ongoing new job announcements, likely supported a slight improvement in consumers’ thinking in regard to the outlook for the labour market in September in spite of the slightly weaker assessment of broader economic prospects.

The September sentiment survey was notable for stronger readings in all three components related to household finances including the assessment of the current buying climate. After a weakening in these areas in August, some rebound is not entirely surprising but the September reading marks the most positive assessment of personal financial circumstances in nineteen months.

We don’t think that Irish consumers have suddenly woken up to a marked improvement in their household finances. However, some specific developments through the survey period may have prompted a little more optimism in this regard.  As noted above, we think the anticipation of the looming repayment of water charges and the prospect of cheaper imported goods and foreign travel likely contributed to this result. Continuing gains in house prices might also supported sentiment as, in aggregate, the positive wealth effects perceived to accrue to the stock of property owners likely exceeded the greater financial struggle faced by would-be buyers.

Our sense is that the strong sentiment result for September was not fuelled by expectations of a ‘giveaway’ budget on October 10th.   Most media coverage of the upcoming budget through the survey period emphasised the limited scope for any material concessions in terms of tax, welfare payments or other aspects likely to directly affect household finances. If expectations of Budget giveaways were driving the September survey result, we would also expect that fiscal largesse to boost consumers ‘ assessments of  Irish economic prospects. So, there is little suggestion in the survey of any great anticipation that Minister Donohoe will deliver a broadly felt uplift in consumers’ fortunes next week.

The broad picture emerging from the September sentiment survey is still one of limited gains in consumers’ incomes but there is also a sense that consumers are now more attuned to the possibility of positive surprises. The key question is whether the upcoming budget and, more generally, the uncertain economic environment that defines the ‘new normal’ will allow Irish consumers to continue to travel hopefully and help to underpin a virtuous circle in consumer sentiment and spending.