Sentiment improving but most not feeling materially better?

Irish consumer sentiment improved for the third month in a row in January but the latest reading is still substantially lower than it was a year ago and also notably below the average of the past five years. While Brexit-related fears have eased somewhat in recent months, the January reading suggests that consumers remain nervous about the general economic outlook and their own financial prospects.

The pick-up in confidence last month seems to largely but not entirely reflect reduced worries about an imminent ‘crash out’ Brexit. The improvement between December and January was more pronounced among older consumers and among  those based in Dublin (as had been the case in the two previous months). These groups had also seen a larger deterioration in sentiment than others in the period since the UK referendum on EU membership in mid-2016.

The recent improvement in sentiment was also less marked among those consumers who reported they were making ends meet with difficulty. So, the very recent trend looks to be a relief rally rather than a fundamental rethink of their circumstances by Irish consumers that might suggest a broadly based improvement is now being felt.

Although the index doesn’t exhibit a consistent seasonal pattern, there is a clear ‘January’ effect in the data- the January sentiment index has been the highest of the year in three of the past four years. This may suggest that the experience of Irish consumers has repeatedly fallen short of their expectations at the start of recent years as a strengthening Irish economy may have overpromised and underdelivered in terms of households’ sense of their own circumstances.

We also think that the timing of the sentiment survey focussed on the first half of the month likely captures a residual Christmas/new year effect when positivity is more pronounced and there is less focus on economic and financial matters in media and social settings. Reflecting this timing issue, the commonly referred to ‘January blues’ typically reveal themselves in the February sentiment reading.

The KBC Bank Ireland consumer sentiment index increased to 85.5 in January from 81.4 in December, leaving the index at its highest level since July 2019 (also 85.5). However, as the diagram below illustrates, the recent improvement represents a partial reversal of the marked weakening seen through 2019. As a result, last month’s reading is significantly lower than that of January 2019 (98.8) and also clearly below the average of the past five years (98.1). 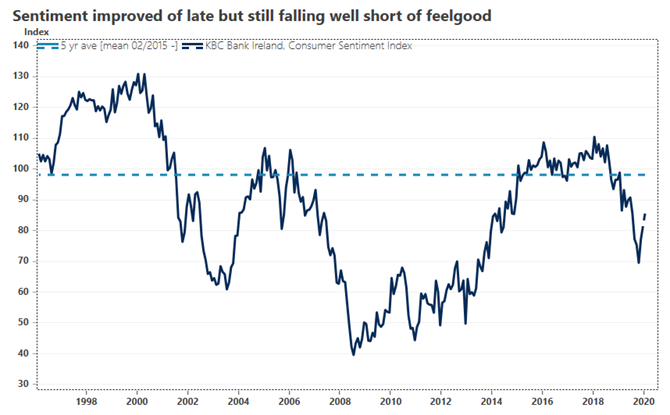 'Feelgood' missing in many places

The improvement in Irish consumer sentiment in January was more modest than that seen in the UK but contrasted with largely unchanged readings in comparable confidence metrics for the US  and Euro area. It should be noted that the January 2020 readings of consumer confidence for the UK and Euro area were slightly below their latest five year average levels while that of the US was modestly higher but the shortfall in the current Irish sentiment reading was notably more pronounced.

An economic environment that is more uncertain in recent years, where a range of structural changes (including technological innovation and the increased incidence of precarious employment) as well as specific risks (such as Brexit) pose downside threats to activity and incomes is clearly weighing on the mood of consumers in many countries at present.

These elements have translated into a marked absence of any ‘feelgood’ factor on the part of a global consumers and, in many instances including Ireland,  sentiment indices point towards a pronounced element of ‘feelbad’. So, the caution and concerns evident in the KBC Bank consumer sentiment index for Ireland appear to reflect worries that are not entirely unique to Irish consumers even if they are more intensely felt here at present.

All five elements of the KBC Bank consumer sentiment index  improved in January relative to December. The largest gain was in relation to the jobs market that may owe something to a number of reports released by recruitment firms through the survey period highlighting vacancies arising from skill shortages in a range of areas and associated upward pressure on pay.

Stronger than expected economic releases and a series of upgraded forecasts for the year ahead together with the disappearance of any lingering threat of an immediate ‘crash out’ Brexit likely fuelled a further pick-up in sentiment in relation to the broad outlook for the Irish economy.

These ‘macro’ developments contributed to a clear improvement in consumers expectations for their own financial circumstances in the coming year. However, this may have been tempered by only a marginal gain in their assessment of how their household finances had developed in the past twelve months.

More notably a fractional change in spending plans fell very short of a tendency towards a marked if temporary uplift in the buying climate in the January sentiment index reflecting seasonal outlays and the bargain-hunting in the post-Christmas sales. A relatively downbeat assessment of current conditions suggests Irish consumers see their glass as half empty rather than half full even if recent developments in relation to Brexit lessen the immediate risk of breaking glass.