Irish consumer sentiment held steady in October as strong ‘macro’ trends continued to offset increasing concerns around household finances. While the October reading is broadly encouraging and suggests Irish consumer sentiment is reasonably healthy at present, the dominant mood appears to be one of continuing caution born out of uncertainty and experience rather than runaway confidence that would reflect a view that the worst is behind us.

The October survey suggests Irish consumers are very much in a wait and see mode at the moment Encouraging news on the economy and jobs suggests  a much better outcome than might have been envisaged when the pandemic first struck but this is tempered by ongoing concerns around personal finances that hints at some element of disconnect between a booming Irish economy and a bothered Irish consumer at present.

The KBC Bank Ireland consumer sentiment index reading for October stood at 86.8 in October, effectively unchanged from the figure of 86.4 reported for September and continuing a pattern of broadly stable sentiment numbers for the past six months since May. Through that period, there have been significant changes in economic conditions and a marked easing in health-related restrictions but there remains a notable degree of uncertainty as to how household incomes may evolve in coming years.

The Irish consumer sentiment reading for October contrasts with another disappointing preliminary result for its US counterpart which, as the diagram below illustrates,  fell back close to a ten-year low this month. The marked pull-back in US sentiment appears to be linked to specific cut-backs in pandemic income supports, a more general sense that the new administration’s policy proposals may have overpromised and could under-deliver, sharply higher inflation and broader concerns that the US economic rebound could weaken materially through the coming year. 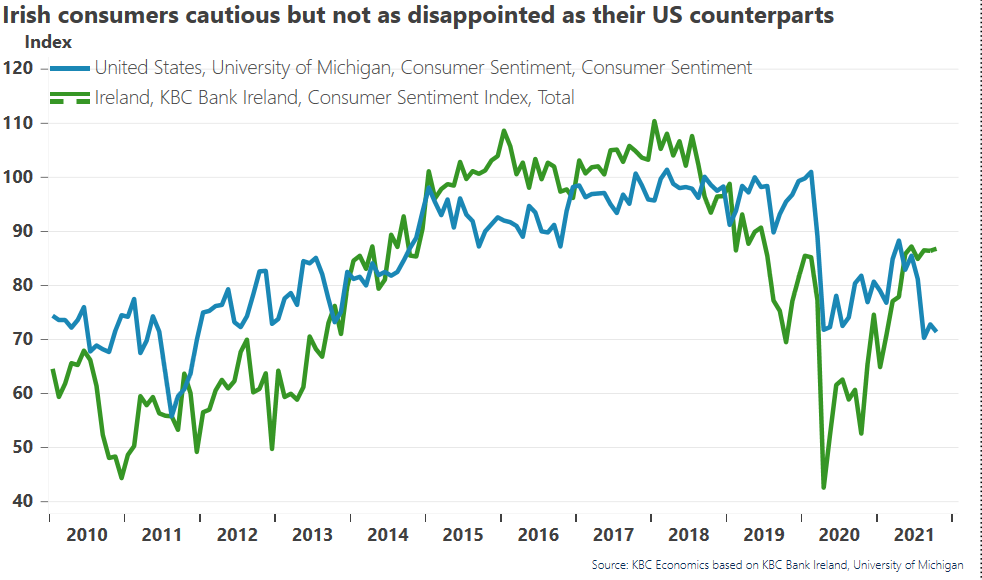 We previously noted, and the diagram above illustrates, that Irish consumer sentiment weakened relatively sharply in the wake of the pandemic as memories of the prolonged difficulties posed by the financial crisis informed the thinking  of Irish consumers. However, a progressive improvement in domestic economic conditions, amplified by a relatively patient approach in terms of the maintenance of Government support measures, have translated into growing confidence that the aftermath of the pandemic would not be reflected in a return to austerity measures.

The Irish consumer sentiment survey for October was largely completed before the presentation of the Budget or the publication of consumer and property price inflation data  October 14th. However, the main elements of Budget ’22 were signalled well in advance while a rising inflation trend has become established of late. So, there is little to suggest these recent developments will markedly alter the mood of Irish consumers.

Indeed, it might be argued that the economic background to the Budget that saw a marked upgrade of official forecasts for activity and employment during the survey period presented a picture of much improved ‘macro’ prospects. The announcement, also during the survey period, of Ireland’s agreement to participate in a new global tax framework provided an increased sense of stability about this country’s economic model. Most associated commentary, that suggested any adverse impacts of that tax framework would be manageable, may have underpinned improving sentiment on the ‘macro’ outlook.

These developments meant the October sentiment survey showed the strongest ‘macro’ reading in three years with views on general prospects for the Irish economy at their best levels since  November 2018 and views on the outlook for Jobs the healthiest since September 2018.   Encouraging as these developments are, we would caution against any inference that consumers believe the Irish economy has returned to boomtime conditions - the shadow of Brexit hung heavily over the late 2018 readings.

If Irish consumers appear reasonably confident about the upward trajectory of the Irish economy at present, they remain altogether more cautious about the outlook for their own households’ financial circumstances. In part, this reflects broadly based uncertainty around the parameters of a post-pandemic economy expected to ‘transition’ to a more sustainable footprint. It also stems from the persistence of significant shortcomings in housing and health as well as other infrastructure headings.

The broad signal from the survey is consistent with the message from the consumer spending element of recent National Accounts data for the second quarter of 2021. Although household spending showed a dramatic 12.6% quarter-on-quarter improvement, it remains about 5% below its early 2019 level and about twice that below its pre-pandemic trend. While we expect strong increases in consumer spending both this year and next, this should be seen as a recovery-in-progress rather than a boom.

All three elements of the October sentiment survey related to spending power and spending plans showed a decline from their September levels. Our sense is that this may owe something to traditional pre-Budget worries. More importantly, we feel that it reflects the increasing influence of a rising trend in the cost of living. Finally, as well as rising prices, we think a weaker assessment of the buying climate may stem from increased difficulties accessing some products  as a result of  global supply difficulties and some Brexit-related logistical problems.

The October survey contained a supplementary question asking how much consumers felt their cost of living had risen in the past twelve months. The average increase across the 1000 respondents to the survey was 4.9%. Given that the inflation figure published by the Central Statistics Office for September was 3.7% and a material further increase in the official inflation rate is expected before end-year, the sentiment survey estimate appears a reasonable barometer of current price pressures.

Importantly, while the official inflation rate attempts to assess the increase in prices facing a representative consumer, the reality is that cost of living pressures vary widely across consumers. Part of this could be due to subjective differences in assessing changes in living costs but it is also likely to be the case that circumstances vary sufficiently widely across households to result in altogether different exposures to price pressures in different areas. 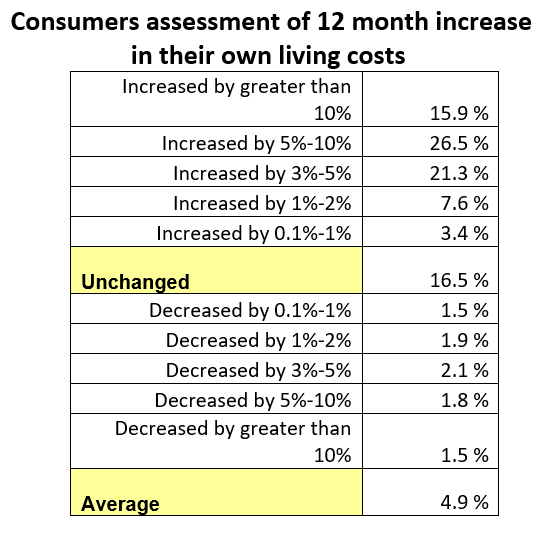 Those consumers on lower incomes or reporting difficulties in making ends meet were more likely to be in the groups reporting rapid increases in living costs whereas those on higher incomes or making ends meet with ease were more likely to report flat or falling living costs. Apart from measurement differences, this sort of difference likely captures variations in the basket of goods and services consumed. For example, with restrictions on travel and many service activities, those on higher incomes may have had their capacity to spend curbed further than those on lower incomes, resulting in a comparatively smaller increase in their living costs. (Of course, it should be noted that we are talking here about a broadly defined rise in living costs rather than somewhat different concept statistically of  pure inflation).  More importantly, these results are a corollary to what is likely to have been a very uneven build-up in savings across Irish households in the past year.

The responses to the special question likely capture significant differences in the share of consumers’ spending power directed towards energy costs. In the same vein, some tendency towards  a greater frequency of reported above average increases in living costs outside Dublin might reflect differences in the importance of fuel costs. Those in the 35-44 and 45-54 age groups were also more likely to signal higher than average increases in living costs, likely capturing the additional burden of larger household size.

These results highlight the need for caution in universally applying even relatively robust statistical metrics such as inflation data. In view of the expected persistence of elevated energy costs through the coming winter, they also point to potentially important headwinds that may act as a restraining influence on Irish consumer sentiment.

Thinking about the full range of goods and services your household normally buys (including food, housing e.g. rent, mortgage, heating/light, transport, healthcare, childcare, education costs e.g. back to school spending, college fees, social spending e.g. restaurants, travel), how much do you think your personal overall cost of living has changed in the past 12 months? 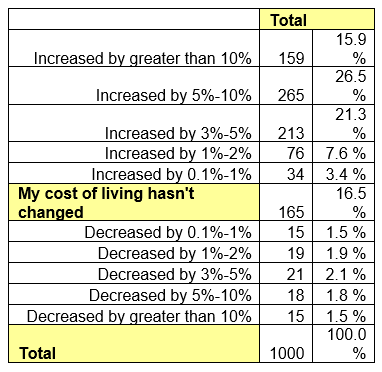