Irish consumer sentiment deteriorated in October as thinking on the outlook for the economy and jobs weakened modestly and views on household finances underwent a more notable downgrade.  It remains the case that at current levels Irish consumers take a reasonably positive view of their economic circumstances but there is also a strong sense in this month’s survey of growing disappointment that the Irish economic recovery is falling well short of consumers’ expectations.

The KBC Bank Ireland/ESRI consumer sentiment index declined to 97.3 from 102.0 in September. This monthly drop was significant but not unusually large It was sufficient to push the index back to its lowest level since February 2015.  Our sense is that the October result does not reflect a major change in thinking. Instead, it seems to reflect a further step up in unease that a much vaunted economic recovery has failed to deliver any marked improvement in the financial circumstances of the average Irish household. With the economic outlook becoming more uncertain of late, consumers seem to be re-assessing their own circumstances in a less favourable light.

As diagram 1 below suggests, the drop in Irish consumer sentiment in October was paralleled by a disappointing reading in the comparable US measure. The latter likely owes something to the fractious tone of the presidential election campaign in the United States and a somewhat related sense among US consumers that a now lengthy economic upturn has failed to deliver meaningful gains for the average household. In contrast, Euro area confidence saw a broadly felt if modest improvement. With UK consumer confidence giving back a limited amount of the strong recovery of the previous couple of months, these mixed readings elsewhere suggest there was no overwhelming global development that would explain the weaker mood of Irish consumers last month although we think there may be echoes of US disenchantment in recent Irish sentiment readings. 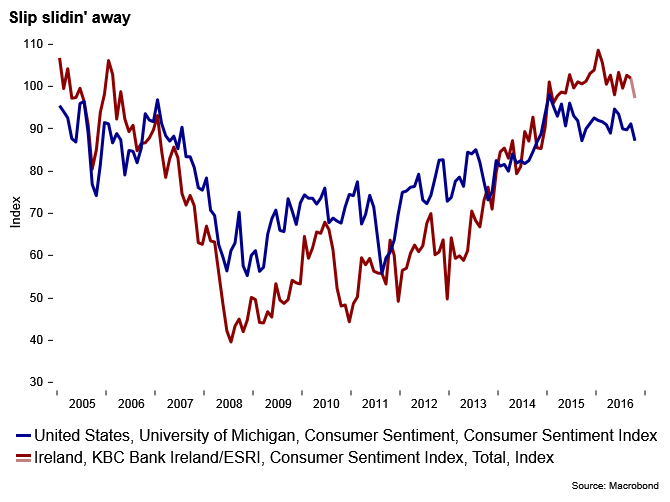 All five main components of the Irish sentiment survey posted lower readings in October than in September. The change in consumers’ assessment of both the general economic outlook and job prospects was relatively modest last month but in each instance it was sufficient to bring the October reading to its lowest level since June 2014. The fact that both of these elements posted their 2016 highs as far back as the January survey further highlights what has been a fairly consistent markdown in consumer thinking in relation to the general economic outlook.

The downgrading by consumers of the outlook for growth and jobs in the Irish economy has to be seen in the context of generally better than expected official data on Irish economic activity and employment through 2016. We think two distinct elements have driven the change in consumer thinking through this period.

First of all, consumers have become increasingly conscious of an increasing array of risks to the downturn of late ranging from ‘Brexit’ through to the Apple tax case and to some high profile domestic industrial disputes. Second, and arguably of greater influence, there is a broadly based view that notably better ‘macro’ conditions in recent years have failed to significantly reverse the deterioration in household finances experienced during the downturn.

The sentiment survey suggests consumers still take a broadly positive view of Irish economic prospects but, since January, the proportion of consumers who expect the Irish economy to strengthen further in the next twelve months has slipped from 61% to 42% while the share that see the economy weakening has risen from 13% to 21%. A gradual erosion of expectations for a progressive improvement in conditions has occurred to the point where the majority of consumers no longer take for granted the persistence of strong Irish ‘macro’ conditions.

The most notable feature of the October survey was a sharp pull-back in consumers’ assessments of how their household financial circumstances had developed over the past twelve months. 29% of consumers reported a deterioration in their circumstances over this period while 20% reported an improvement—the most negative that this element of the survey has been in 13 months.

We are not aware of any dramatic change in household financial conditions in the past month or so that would have prompted any dramatic re-assessment of recent trends. Instead, we see this downgrading as reflecting a sense that consumers feel an Irish economic recovery that has run well ahead of most expectations has delivered a recovery in their household's living standards that to this point has fallen well short of their expectations.

We think the run-up to Budget 2017 may have been the catalyst for this rethink. For many Irish consumers, the downturn in their household spending power in recent years is strongly linked to tax increases and spending cuts enacted in the course of a prolonged and painful adjustment in the public finances. Through the October survey period, much of the media coverage emphasised how limited planned income tax ‘cuts’ and benefit increases in Budget 2017 were likely to be.

The prospect of only marginal gains in Budget 2017 may have caused some consumers to focus on the limited extent to which the deterioration in their financial circumstances has been reversed several years into what is conventionally regarded as an exceptional Irish economic upswing and one that that may be less robust in the future.

The October survey also saw consumers downgrade their views on the outlook for their household finances over the next twelve months and scale back their spending intentions. While these elements of the survey were weaker than their September readings, they were still broadly positive. This hints that while Irish consumers recognise some element of progress, the difficulty for them is that the pace of improvement is perceived as too limited relative to the deterioration that preceded it or the progress they expected the Irish economic recovery to deliver.

A particular difficulty for many Irish consumers in this context is that when the word ‘recovery’ is used in relation to Irish economic circumstances, the reference point for them may well be the living standards that they enjoyed in 2007 and 2008. The same problem likely informs some current high profile industrial relations disputes. When economists and policymakers discuss the problem of ‘adjustment fatigue’, this usually refers to limits to the timeframe in which additional painful measures can be implemented. It may also be that once ‘recovery’ is underway, similar time constraints may apply in relation to both the pace and extent to which austerity measures are reversed. Unfortunately, there is no consensus in relation to how far and how fast (or probably in what order) Ireland’s recent adjustment programme can be amended. 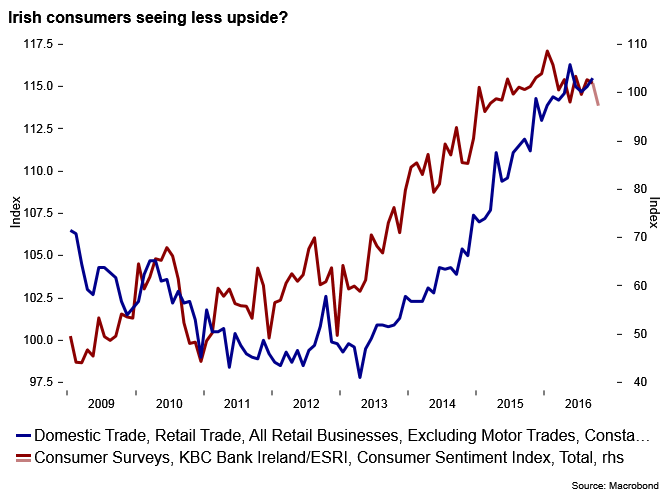 The details of the October sentiment survey hint at a significant disconnect between the reality of the current economic and financial circumstances facing many Irish consumers and the expectations they had formed as to how far and how fast their living standards would improve once the Irish economy’s austerity period had ended.  Such concerns could continue to weigh on sentiment even if a reasonably healthy economic upturn continues. Significantly, as diagram 2 above suggests, consumers may already be amending their spending plans to take account of a less positive economic backdrop and a more limited improvement in household finances than previously envisaged.