Survey suggests consumers are increasingly nervous rather than extremely negative

Irish consumer sentiment fell sharply in September, which we think reflects concerns about Brexit, sharp increases in energy and housing costs and expectations of very limited gains in the upcoming Budget. These factors combined to prompt a significant downgrade in views on household finances as well as on the broader economic outlook.

The KBC Bank/ESRI consumer sentiment index fell to 96.4 in September, its lowest level since December 2016. The 6 point drop from August’s reading of 102.4 was also the largest monthly decline in four years.

There is little question that the September sentiment survey reflects a clear drop in confidence among Irish consumers. However, two caveats should be noted. First of all, for four of the five key elements of the survey, positive responses still outnumbered negative responses in September. So while sentiment has weakened it is by no means sour at present. At current levels, the survey is still consistent with an improving Irish economy although it suggests that for the typical consumer the scale of gains is notably more modest than implied by some Irish ‘macro’ indicators.

Second, in circumstances where there was a number of unsettling developments in relation to the prospective course of Brexit, it is not entirely surprising for a broadly based change in thinking to translate into a sharp change in sentiment that in time could be at least partly reversed. We would not want to dismiss the weakening in sentiment in September but we think the scale of movement in the index last month may overstate the change in the current and prospective circumstances of the average Irish consumer.

The sharp drop in Irish consumer sentiment in September coincided with mixed readings elsewhere in similar indicators. In the US, the most comparable measure of sentiment reversed a sluggish trend of late to rise to the strongest level since March and, as a result, sentiment rose to the third highest reading in fourteen years. The improvement reflected stronger expectations for jobs and incomes. 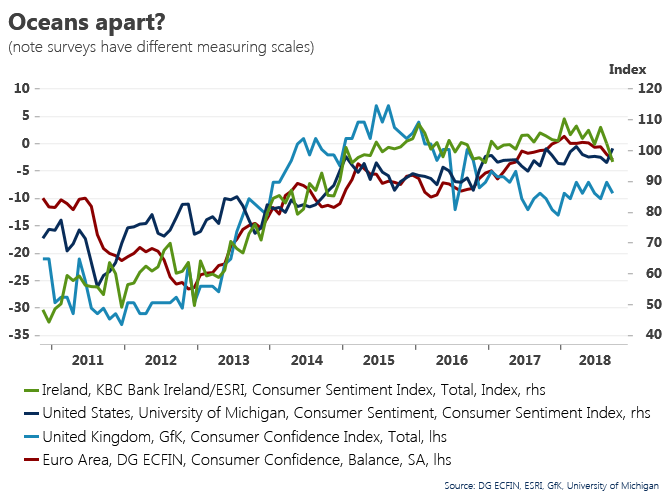 In marked contrast to developments on the other side of the Atlantic, confidence measures in the Euro area and UK both tumbled in September. The drop in the Euro area largely reflected significant declines in France and Spain while the fall in the UK appears to highlight growing concerns about the inability to forge a consistent or credible position in the Brexit negotiations. As a result, British consumers were gloomier about their personal finances as well as the broader economic outlook.

The fall in Irish consumer sentiment in September saw material declines in four of the five main components of the index. The one element to post a monthly gain was expectations for the jobs market and the improvement compared to August in the employment area of the survey was fractional. Our sense is that this owed something to the release of particularly strong official data showing sharp increases in numbers at work in Ireland in spring 2018 from a year earlier as well as a host of new jobs announcements through the survey period.

While Irish consumers were marginally more upbeat about job prospects, they were notably more nervous about the broader economic outlook in September.  While the size of the monthly drop broadly mirrored that seen in August, this was sufficient to push this area of the survey to its weakest reading in nearly five years.

This deterioration is primarily because fewer consumers expect the Irish economy to perform well through the next year. As recently as July, 52% of consumers expected the economy to strengthen over the next twelve monthswhile just 14% envisaged weaker conditions. In September just 36% anticipated stronger conditions while 21% see a weakening.

Our sense is that this re-assessment of Irish economic prospects is largely prompted by increased nervousness about Brexit. In an important sense, a rapidly shrinking timeline has almost inevitably focussed more attention on this issue. However, from a consumer perspective, the most worrisome aspect is the tension between a shortening timeframe and repeated setbacks around the negotiations that imply a notably increased threat that a workable, damage minimising agreement will not be reached.

The September survey period saw  the UK government’s ‘Chequers proposals’ for the withdrawal treaty between the UK and EU draw increasingly hostile reactions both from within the Conservative party and elsewhere in the UK political establishment as well as from various EU sources. In turn, the growing threat that the UK might ‘crash out’ of the EU without a deal or a transition period prompted a marked increase in consumer concerns about the outlook for the Irish economy through 2019.

While Brexit constitutes a troubling ‘known unknown’, the September sentiment survey suggests Irish consumers are also grappling with worrisome ‘known knowns’ in the shape of continuing strains on household finances. The area of the survey showing the largest monthly drop in September related to consumers’ judgements as to how their household finances had developed over the past twelve months. For the first time since December 2016, a larger share of consumers (23%) felt their financial circumstances had worsened over the previous year, than felt they had improved (21%).

This negative assessment of household finances likely owes something to significant price increases in some important areas of consumer spending.  Official inflation data for August show a 3.1% monthly rise in the cost of light and heating that brought the annual increase to 13% while a 1% monthly increase in private rents brought the annual rate to 6.2%.

Our best guess is that comments downplaying the scope for Budget day improvements to tax and social welfare also contributed to a downgrade of household financial circumstances in September.

Finally, we would continue to highlight the likely negative impact on sentiment of metrics that show a marked upswing in the financial fortunes of Irish households at the aggregate level. These may well have the effect of causing consumers to feel that they are increasingly disconnected from the boom that is being reported and worse off accordingly.

Official data published in August show the aggregate disposable incomes of Irish households were 10% higher in early 2018 than in 2007. As the diagram below suggests this was significantly driven by population growth. However, the income of the average household is still some 6% lower than in 2007 and showing only limited growth of late.

Similarly, in September, new data showed that, at the aggregate level, the net worth of Irish households (arrived at by subtracting financial liabilities from financial and housing assets) reached €732bn in early 2018, surpassing the pre-crisis peak of €719bn. However, as the diagram illustrates, the net worth of the average household is still about 13% below the 2007 level. Moreover, any improvementis largely a reflection of a recovery in house prices, it is not felt evenly across Irish households. 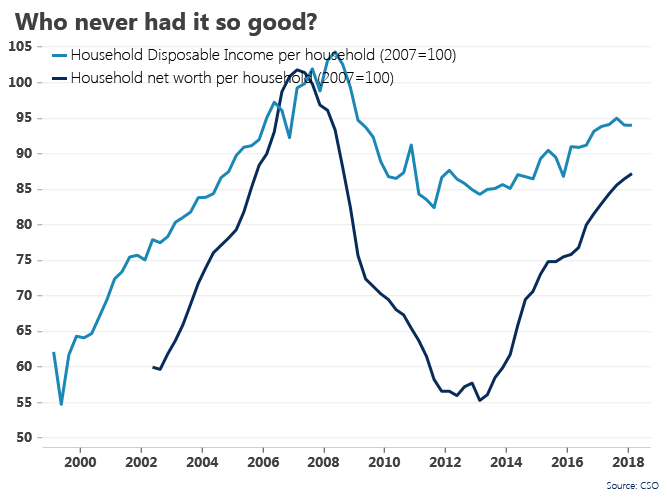 Increased concerns about the general economic outlook coupled with a sense of continuing strains on household finances and being left behind by an emerging boom meant that consumers also marked down their expectations for their household finances in the next twelve months as well as their spending plansalthough the decline in these areas of the survey was less pronounced than in their evaluation of the past twelve months and in both instances positive responses continue to significantly outnumber negatives.

While the average Irish consumer may be more nervous in September, this is largely a reflection of increasing concern rather than a broadly based collapse in confidence. Responses to most areas of the survey are still broadly positive and coupled with ongoing strong increases in the number of people living and working in Ireland, this holds out the prospect of a healthy rather than white hot increase in consumer spending overall through the remainder of this year and into 2019.