After four months of weakening sentiment, Irish consumer confidence improved slightly but perhaps surprisingly in June. There has been no clear easing of late in the forces that progressively darkened the mood of Irish consumers through recent months.

It is not entirely clear why the sentiment index improved in June but different interpretations of the data might imply markedly different paths for the Irish economy and, as a result, would suggest materially different shapes and scale of policy actions might be needed to support households and firms.

While the June sentiment survey doesn’t clearly indicate what policy support may be required, these results do suggest an evolving and unclear situation that would strengthen the case for waiting to properly calibrate major policy measures rather than rushing to action that could prove unnecessary or entirely inadequate.

One possible interpretation of the June sentiment survey results is that they suggest that Irish consumers feel they are now braced for the difficulties that lie ahead. At current levels, sentiment is awful rather than apocalyptic, suggesting the Irish consumer is down but not entirely out.

It could also be that the small improvement in the June survey results is largely a response to sharply increasing indications of significant offsetting supportive government measures in or even ahead of the upcoming Budget.

Finally, it may be that the June reading is a largely technical and possibly short-lived improvement in consumer sentiment. Which of these interpretations proves most correct is important for Irish economic prospects and particularly significant for the sort and scale of fiscal response that is needed.

The KBC Bank Ireland consumer sentiment index increased to 57.7 in June from 55.5 in May, reversing last month’s loss and bringing the survey back in line with its April reading.  Sentiment at present is well below the series average of 86.4 and, as such, suggests Irish consumers are very nervous about their economic and financial circumstances. 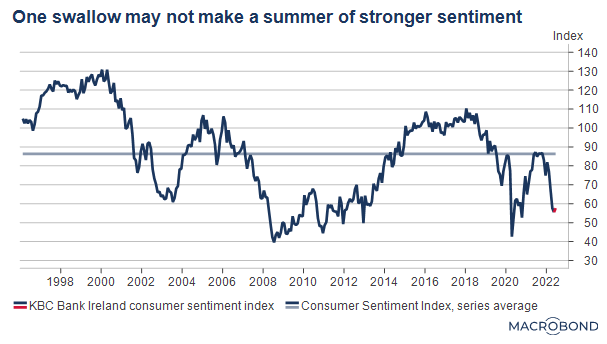 Why did consumer sentiment improve in June? The good, the bad and the random

It is not entirely obvious why confidence rose this month but three very different interpretations might be suggested. One possibility that might be regarded as an optimistic interpretation is that Irish consumers have now prepared themselves for substantial challenges in terms of living costs and a more uncertain global economic outlook. On this view, the collapse in consumer confidence in early 2022, at least at the aggregate level, was prompted more by fear than by current financial strains.

While we would not be entirely comfortable with this interpretation, it would accord with some recent official data that appear to suggest Irish household finances have been strengthening rather than weakening of late,  In this context, CSO data suggest that between the final quarter of 2021 and the first quarter of 2022, Irish consumers spent an extra €179 million-largely reflecting higher inflation, but over the same period the aggregate incomes of Irish households increased by €1534 million.

As a result, a pronounced  ‘precautionary motive’ has meant that Irish consumers had added to an already large savings war-chest in early 2022. In such circumstances, it could be that the onset of summer sales and holiday spending prompted a slightly less pessimistic assessment of their financial circumstances by Irish consumers.

If one set of official data hint that the June sentiment survey captures a relatively strongly positioned Irish consumer, other numbers hint at an altogether more troubling set of circumstances. Overall consumer spending has fallen in each of the past two quarters. As a result, we are now in what might be described as a consumer spending recession.

Viewed in this light, the improvement in consumer sentiment in June might be better explained by the increasing expectation of substantial government measures to significantly offset the adverse impact of higher living costs particularly on those most sorely affected.  On this interpretation, the pick-up in sentiment in June reflects the importance placed on a strong fiscal response.

A third explanation of the June sentiment gain could also be plausible. It is not unusual for occasional and often random monthly corrections to temporarily disrupt trend movements in consumer confidence. As we noted last month, the fall in sentiment in May was only the fifth time in the survey’s twenty six year history that confidence dropped for four months in a row.

Only once has the sentiment index dropped for more than four months in a row-between February and July 2008 when the cumulative drop of 27.4 points was broadly comparable to the 26.4 drop recorded between February and May of this year although a rapidly worsening domestic economic and financial climate was altogether more apparent in the earlier period.

In the same fashion, it should be noted that the June 2021 survey recorded the strongest survey reading in the past two years. So, there could be some seasonal influence-possibly reflecting some combination of summer sales and holiday effects. Viewed from this perspective, the modest uptick in sentiment in June could simply be a technical and likely temporary bounce rather than any indication of materially changed thinking on the part of Irish consumers.

The details of the June sentiment survey don’t markedly improve our understanding of the reasons for the modest improvement compared to May. Although views on the broad economic outlook worsened-likely as a result of increasingly gloomy global forecasts and commentary, the jobs element improved, presumably because of strong domestic employment data and widespread support of problematic levels of job vacancies.

All three elements of the survey focused on household finances improved compared to May despite a survey period that was dominated by media coverage of worsening cost of living pressures. At the margin, the stronger performance of the historic element of household finances might suggest consumers fully recognise such difficulties are likely to increase in coming months and have already significantly adjusted to this painful reality.

The results also give a sense of the relative intensity of the inflation shock to various demographics as the scale of cost of living pressures have meant many who were managing to get by or even reasonably comfortable have seen their financial circumstances change markedly.

If cuts to non-essential spend and increased switching might be describes as ‘soft’ responses to increased living costs, a much more difficult adjustment is signalled by the substantial 37% of consumers who say they are adjusting their spend on essentials. This likely includes reductions in travel, turning down or off domestic heating and possibly significant variations in cutbacks to grocery spending. This implies that more than one third of Irish consumers are making ‘hard ‘ adjustments to their spending and, as a result, likely to their standard of living.

If the sentiment survey highlights widespread adjustments to spending, it also suggests that significant numbers of consumers are also making efforts to boost their incomes to allay the impact of increased living costs. As the diagram indicates, 25% of consumers say they are doing more work in response to increased inflation. This result appears broadly consistent with official jobs data that show increased labour force participation and more hours worked of late. In the same context, some 13% of consumers say they are seeking pay increases while a broadly similar 11% are looking to change jobs. (Note; As not all consumers are working, these numbers would translate into substantially larger numbers of employees).

As it seems that income and spending are currently set on diverging paths for most Irish consumers , a notable  27% of survey respondents say they will reduce the amount they save while a markedly smaller 6% say they will borrow more. The main message of the survey is that cost pressures are prompting strong and varied responses across most consumers, suggesting difficulties in this respect are substantial and widespread.

Indeed, only 5% of consumers say that they don’t need  to make any  adjustments in response to increased living costs, suggesting that only a very small minority of Irish consumers feel they are not significantly affected by the surge in inflation.

At the other end of the spectrum, a small but significant 9% of consumers feel they have no scope to make further adjustments. This suggests a material number of consumers are in urgent need of assistance whether that comes from the changes in their job and/or pay, or through increased government support. It is likely that there is a fair measure of overlap between this group and the 14% of consumers who indicated that any offset to current cost of living pressures was likely to come primarily from additional Government measures.

Responses to this special question emphasise the widely felt nature of current cost of living pressures. However, the detailed responses hint at some differences in the nature and extent of cost pressures and coping mechanisms across various parts of the population.

Sampling limitations preclude precise figures in this regard but the general tone of responses suggests that those aged 35 and above are making more adjustments to their spending than younger age groups in response to higher inflation.

Of course, one possible reason for this could be that many in younger age groups may have relatively limited incomes and spending power and, consequently, little scope to adjust further. In this context, those in the 25-34 age group reported the greatest incidence of being unable to make further adjustments. For these reasons those in younger age groups are more likely to respond to current difficulties by seeking higher pay or looking to change jobs. Again, the share of such responses peaked in the 25-34 age group.

The share of consumers cutting back both on non-essential and essential spending climbs markedly with age until 65, with a slight easing back thereafter. In some instances, this may reflect limited capacity to adjust further on the part of older consumers but apart from 18-24 year olds, this group had the lowest share of respondents indicating no further scope to adjust.

In this respect, the survey might suggest that the group showing most change in circumstances because of cost of living pressures are ‘the squeezed middle aged’. This grouping would tend to have a relatively large number of ‘fixed outlays’ often related to spending associated with child dependents and housing and other mid-life costs.

The survey found responses from the over 65’s that were sampled broadly matched broader averages and did not show particular pressure points evident in some other age groups. This could suggest that financial circumstances vary widely across this demographic.

Likely reflecting income differences as well as the less dramatic impact of increased fuel costs, responses from Dublin consumers suggested a slightly lesser scale of spending adjustment to cost of living pressures and a greater focus on pay and changing jobs than reported by consumers from the rest of Ireland.