Sentiment an increasingly important influence on outlook for Irish Consumer spending; cash hit, closures and caution drove a sharp drop in consumer spending in first half of 2020

Confidence likely to play pivotal role in strength or shortfall in spending rebound through the remainder of the year. Will Budget 2021 help or hurt?

Irish consumer sentiment improved marginally in September, recovering about half of the decline seen in August. The survey was completed before the re- introduction of tighter localised health-related restrictions on Friday September 18th.

The slight gain in September is encouraging but the zig-zag pattern of recent months hints at an Irish consumer struggling to make sense of the a very unclear environment at present. More worryingly, the sentiment index remains at levels that suggest consumers remain worried about both the general economic outlook and their own household finances.

The KBC Bank Ireland consumer sentiment index increased to 60.7 in September, a 1.8 percentage point gain that followed a 3.7 point drop in August. The current reading remains well above the recent April low-point of 42.6 but it is a clearly greater distance below either the February reading of 85.2 or the long term series average of 87.2. As such, it suggests Irish consumer confidence is clearly down but not entirely out.

The improvement in Irish consumer sentiment in September mirrors gains this month in confidence readings for the US,UK and the Euro area. However, the change in the Irish survey was comparatively modest particularly given that the other two indices had also improved in August.  Our sense is that this may reflect a greater sensitivity on the part of Irish consumers to concerns about the coronavirus and its potential economic impacts.

September reading suggests consumer confidence down but not out

The main driver of the improvement in Irish consumer sentiment in September was a slight easing in negativity about the broad Irish economic outlook although the mood remains overwhelmingly gloomy with only one in twenty consumers expecting the Irish economy to strengthen in the next twelve months and seven in ten expecting further weakness. At the margin, solid tax returns and some rebound in retail sales as well as industrial production likely contributed to the small improvement in this area as might moves towards unwinding of regional lockdowns.

In contrast, concerns about unemployment rose albeit modestly in September. This could reflect ongoing concerns about the viability of employment in a number of sectors still operating well below capacity as well as the release during the survey period of official jobs data for the second quarter showing that, in marked contrast to activity indicators, the decline in numbers at work in Ireland was among the most severe in Europe.

September also saw a slight improvement in expectations for household finances although here again worries continue to dominate. While roughly two thirds of Irish consumers see no change in their spending power in the year ahead, of the remainder, five times as many expect their finances to worsen as expect an improvement.

A similarly modest improvement in spending plans in September may owe something to discounting initiatives by retailers around the reduction in VAT as well as other sales incentives intended to encourage a further rebound in consumer spending. The success of such measures could play an important role in underpinning job prospects through the remainder of the year. In this regard, the sentiment survey may offer some perspective on the extent to which any shortfall in consumer spending prompted by health restrictions limitations might be made up later in 2020.

It seems clear that the outsized 19.6% drop in Irish consumer spending in the second quarter and the  quarterly drop of 3.6% in the first three months of the year that preceded it reflects some combination of three influences, (i) the direct impact of job or income losses for a significant cohort of consumers, (ii) ‘lockdown’ restrictions that markedly curtailed the capacity to spend of most consumers, and (iii) a sentiment-driven element reflecting worry about potential job/income losses for a much broader group of consumers. How fast and how far spending rebounds will be significantly influenced by the relative importance of each of these factors.

The significant drop in numbers at work undoubtedly weighed directly on consumer spending in the first half of 2020 but the recent pull-back in spending was altogether more severe than that following the substantial jobs-shedding of the 2008/2009 period. Moreover, the cumulative drop of €8.4bn in household spending between Q4 2019 and Q2 2020 (in current prices, not seasonally adjusted) was accompanied by an increase in household deposits of €6.9bn (see diagram below). 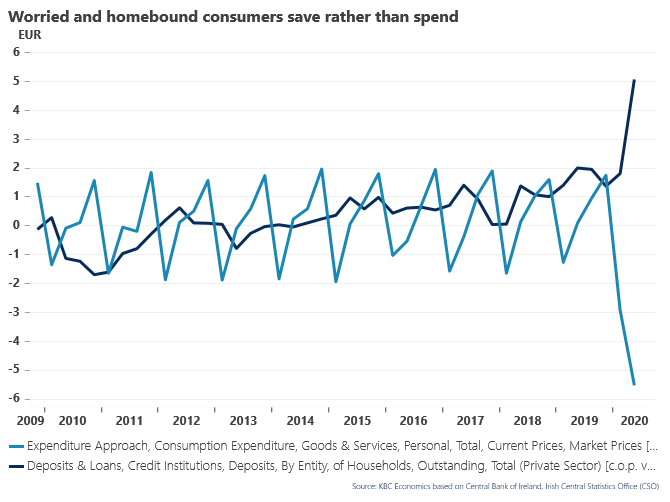 While consumers’ circumstances likely varied markedly through the first half of this year, at the aggregate level, it seems that much of the pull-back in consumer spending did not reflect a dramatic deterioration in incomes (significantly because Government income support measures offset ‘direct’ income losses. Greater clarity in this regard may be offered by the releases of sectoral accounts data later this week). The sense that income losses were not the key driver is also suggested by the sharp rebound in retail sales of late, with the headline August figure up a staggering 94% from the April low-point.

Given that substantial (if somewhat diminished) Government income supports persist, a key question in terms of the scale of any rebound in Irish consumer spending through the second half of 2020 is the extent to which the recent pullback reflected precautionary saving driven by fear or forced savings because of the ‘lockdown’.

In reality, both fear and forced savings likely played some role in the pullback in household spending in the first half of the year. Some recent ECB  research (Covid-19 and the increase in household savings; precautionary or forced, ECB bulletin September2020) attempts to disentangle the two elements by looking at the historic links between household savings and  the unemployment element of the consumer confidence survey for the Euro area. The analysis suggests that increases in savings beyond the scale typically associated with increased consumer concerns likely reflects the impact of limits on the scope to spend during ‘lockdowns’.

In the case of Ireland, the household savings ratio has traditionally been very volatile, in part reflecting measurement issues, but, as the diagram below suggests, there has been some correlation between job fears and changes in household savings. Unemployment concerns have continued to grow through the third quarter reflecting worries about long lasting impacts of the pandemic (even as the Covid-adjusted unemployment rate eased in recent months).

However, as the graph below suggests on the basis of historical relationships between unemployment fears and savings tendencies,  it still seems that savings have markedly overshot the sort of level that might be consistent with much increased caution of late. This suggests that lockdown constraints played a very important role in curbing spending through the second quarter of 2020. 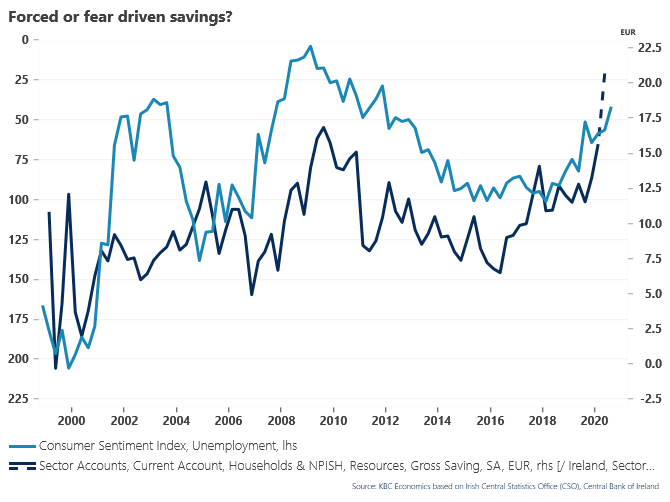 As a result, this relationship would imply the likelihood of a strong rebound in consumer spending through the second half of the year. Although it is still likely to fall well short of the scale needed to fully compensate for the lost spending of the first half of 2020, it could be somewhat stronger than widely feared.

How much of the lost ground is recovered will be significantly influenced by the extent to which health related restrictions directly curb household spending or prompt increased concerns through coming months. There is some risk that the recent tendency towards localised restrictions as well as worries about the spread of the virus and the sustainability of income supports cause temporarily ‘forced’ savings to become longer term fear-based curtailments of consumer spending.

With Irish consumer confidence suffering from hugely increased uncertainty, a Budget 2021 package that, in signal as well as substance, points the way to a stronger Irish economy in 2021 could materially improve the path of consumer spending in coming months. In contrast, measures that prioritise the public finances above activity and employment may lead to a more permanent step-up in precautionary savings.