Broadly based increases in activity prompt increased hiring and some increase in costs.

Budget 2016 not the key influence on 2016 business outlook but will support jobs.

Section 1:  Activity, Employment And Optimism On The Rise

Irish business sentiment strengthened significantly in the third quarter of 2015 reflecting companies’ own experience of increased activity levels and their greater sense of optimism about the outlook for the broader Irish economy. So, the survey reflects buoyant ‘micro’ conditions and increased confidence about the ‘macro’ environment.

The KBC Bank Ireland/ Chartered Accountants Ireland Business Sentiment Index increased to 130.8 from 123.6 in the previous quarter. As diagram 1 below indicates, this is the strongest reading since the survey began in late 2006. The results suggest the upswing has become more broadly based of late and firms are increasingly confident that this will continue in the final months of 2015. 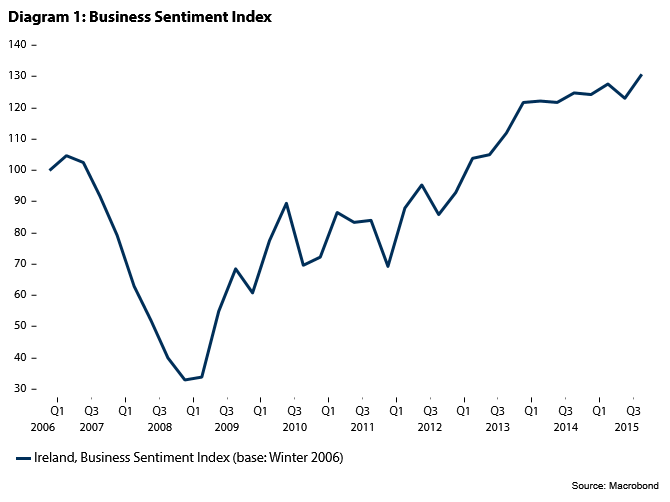 There was a marked step-up in Irish business activity levels in the past three months with more companies reporting output gains and fewer reporting reduced output than at any other time since the survey began nine years ago (see diagram 2).

This improvement was broadly based but it was particularly pronounced in sectors such as manufacturing and business services. Both of these areas are significantly focussed on export markets and had shown a slightly softer trend in the previous survey. These responses are encouraging in the context of increased concerns of late about the strength and sustainability of the global recovery as they suggest a measure of resilience in the order books of Irish firms. 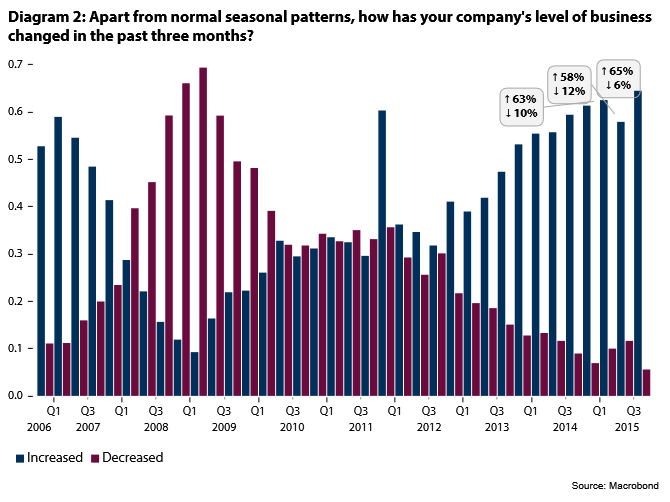 In terms of domestic facing businesses, increases in construction were notably more broadly based in the past three months while there was a marked reduction in the number of firms in the consumer area that reported weaker activity of late.

Looking ahead to the final months of the year, Irish companies expect growth to continue on a broadly similar trajectory. As diagram 3 below indicates, there isn’t any widespread expectation of a further acceleration of growth in the near term. Indeed, food and other manufacturing firms as well as builders are all a touch more cautious about the rate of growth they envisage for the final quarter of 2015 whereas companies in consumer and business services areas are slightly more optimistic.  However, in each instance, no marked change in sectoral conditions is envisaged in the next few months. 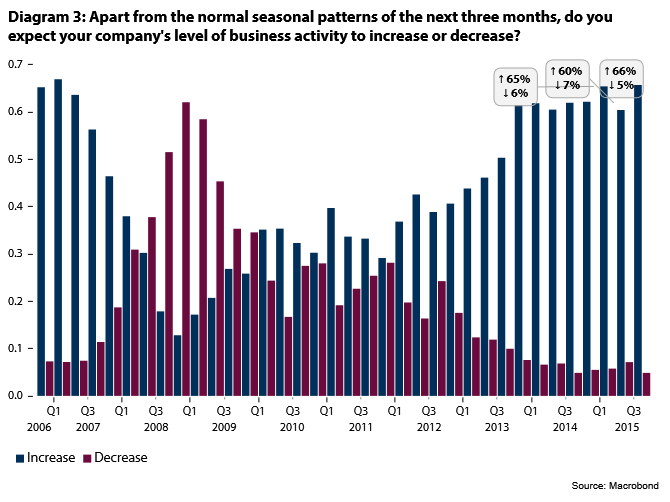 The healthy trend in business activity has prompted continued jobs growth. As diagram 4 indicates, the change in employment conditions since the summer survey is relatively modest but they are sufficient to make the current reading the most positive in the nine years of the survey.  These results point towards a progressive strengthening of the Irish jobs market rather than any seismic change of late.

While the number of firms hiring increased modestly, the number of firms reducing headcount also rose, albeit marginally. This may owe something to on-going competitive pressures that are weighing on some firms but it could also reflect difficulties in attracting suitably skilled staff in certain areas. Once again, this highlights a recurrent finding of the survey that conditions are far from uniform across sectors and even across companies in the same sector.

Job conditions improved across all sectors but the pace of growth was slightly softer than three months earlier in areas such as manufacturing and construction. This outturn is in keeping with their more cautious outlook .In contrast, companies in sectors such as consumer and business services have stepped up net hiring, an outturn that is also consistent with their more positive assessment of the near term outlook for their activity levels. 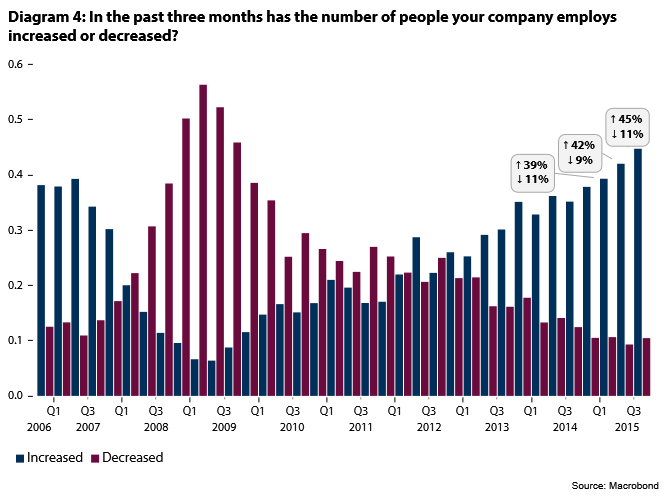 The number of companies reporting that their costs had increased in the past three months rose marginally while there was a similarly small drop in the number of firms reporting lower costs of late. Diagram 5 below shows that this was sufficient to make the costs element of the autumn survey the strongest in seven years. To a considerable extent, this reflects the pick-up in domestic spending and the related difficulties in up-scaling businesses; a comparatively small number of companies in areas such as manufacturing reported higher costs of late whereas increases in construction costs were relatively broad-based. 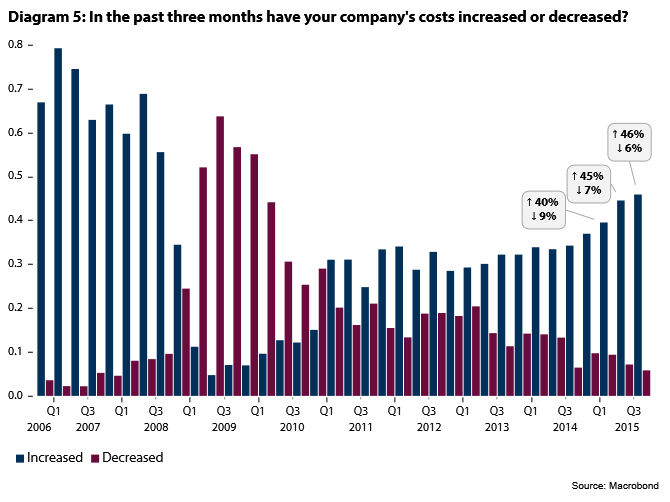 Alongside a healthy reported trend in activity levels in individual companies, the autumn survey also recorded a marked improvement in business confidence in relation to the broader Irish economy.  This comprised a strong increase in positive views and a similarly notable drop in negative views to their lowest level in the nine years of the survey (see diagram 6 below).  Optimism in regard to the general economic backdrop was broadly based but, compared to the previous survey, the improvement was most notable among firms serving the Irish consumer and construction activities, underlining the more recent nature of the pick-up in domestic spending. 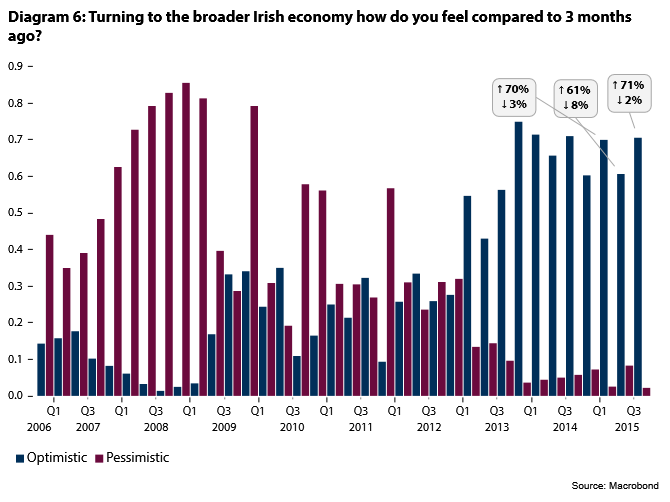 Section 2: Budget Not Seen As Key To Outlook For Business In 2016 But Should Boost Jobs

As usual, the KBC Bank Ireland/Chartered Accountants Ireland business sentiment survey included a number of supplementary questions.  The timing of the autumn survey meant these focussed on Budget 2016 and its significance for corporate Ireland.

We began by asking how important companies considered Budget 2016 was to the outlook for their business in the coming year relative to a range of other external influences. The responses shown in diagram 7 below suggest that Budget measures are not generally regarded as the key determinant of business prospects for 2016. The central importance of external trade to the health of the Irish economy is clear from this table. With export market trends the most widely cited influence and cost trends and currency movements also prominent in responses, a capacity to successfully buy and sell on world markets is seen as the main driver of the fortunes of corporate Ireland. 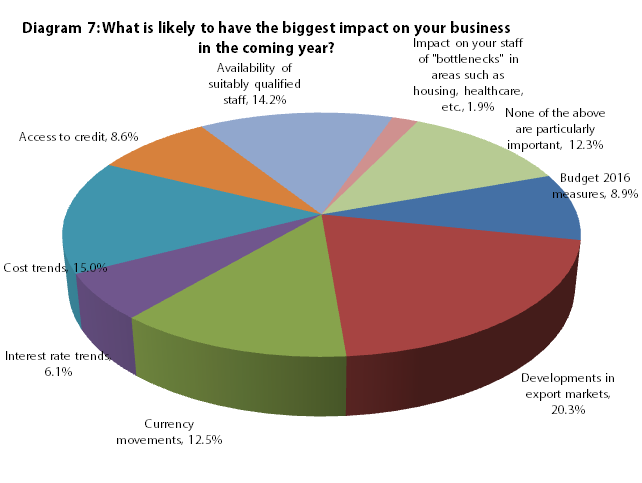 To fully assess the significance of Budget 2016 on business sentiment, we then asked firms to indicate the extent to which the Budget was likely influence the performance of companies in the year ahead. A similar question has been included in the corresponding survey in each of the past two years in respect of the two previous Budgets and a comparison of responses to these questions is set out in diagram 8. This suggests a marked reduction in the perceived importance of budget measures in the past two years.

The survey does not directly ask respondents why Budget measures are now perceived to be less critical to Irish business prospects. Diagram 7 above suggests that no single issue now dominates business thinking and the general operating climate has likely improved rather than worsened through the past two years. So, it doesn’t seem to be the case that some more pressing issue has overwhelmed the influence of Budget measures. Instead, a number of reasons might be suggested for a relatively muted business response to Budget 2016 and its immediate predecessor.

First of all, it could be argued that Budget 2016 did not incorporate many dramatic measures that directly change business conditions. Some (possibly unrealistic) expectations of major initiatives in areas such as housing or entrepreneurship were not met. While the Budget did support spending power and ease the burden of personal taxation somewhat, it did not contain any notable surprises in this respect and, consequently, it may have been perceived as a budget that was focussed on the household rather than the corporate sector.

It could also be suggested that Irish companies take the view that the impact of the Budget on the business environment is altogether greater when it is harmful than when it is helpful. As a result, Budgets that ‘take’ assume far greater importance for business than Budgets that ‘give’. There is little doubt that in addition to the direct impact of the measures themselves, uncertainty about the scale, source and duration of painful fiscal adjustments weighed heavily on Irish business confidence in the years since 2009. Budget 2014 was important in this context because, like its predecessors, it took purchasing power out of the Irish economy and through various taxation measures and public spending cutbacks boosted the cost of doing business in Ireland. In contrast, Budget 2016 may be regarded as comparatively less important simply because it doesn’t represent a further impediment to business in Ireland in the year ahead.

Although responses to these questions might suggest Budget 2016 has had a very limited effect on the Irish business environment, answers to another question (see diagram 9 below) hint at a more notable impact. We asked whether Budget 2016 was likely to alter hiring plans for the coming year. As might be expected, Budget measures won’t alter payroll plans for most companies but a significant 13% of respondents suggest the Budget is likely to result in additional recruitment. These responses were seen across all sectors but were particularly marked in the case of construction companies and also more common in consumer focussed businesses. 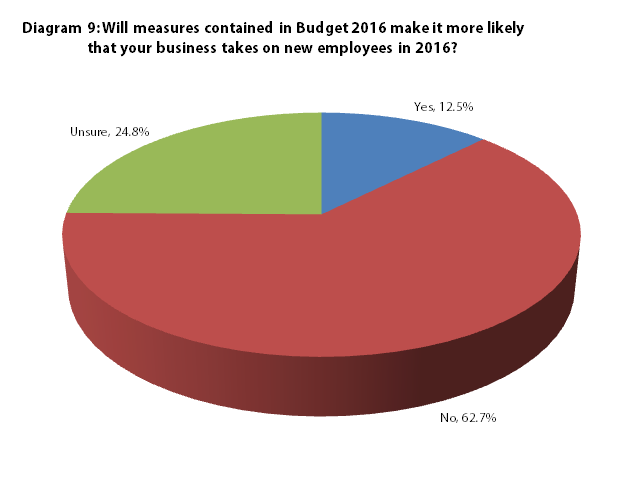