Four times as many companies seeing headcount rise as fall

Business sees housing/health and ‘overheating’ as priorities for Budget 2019

Irish business sentiment has weakened marginally of late as increased uncertainty about the outlook for the global economy weighs on firms’ expectations for their own activity levels in coming quarters as well as their assessment of prospects for the Irish economy as a whole. The pull back in sentiment is largely due to increased caution about the future as the summer survey found companies have continued to report stronger output and hiring in the past three months.

Section I: Activity up but so is uncertainty 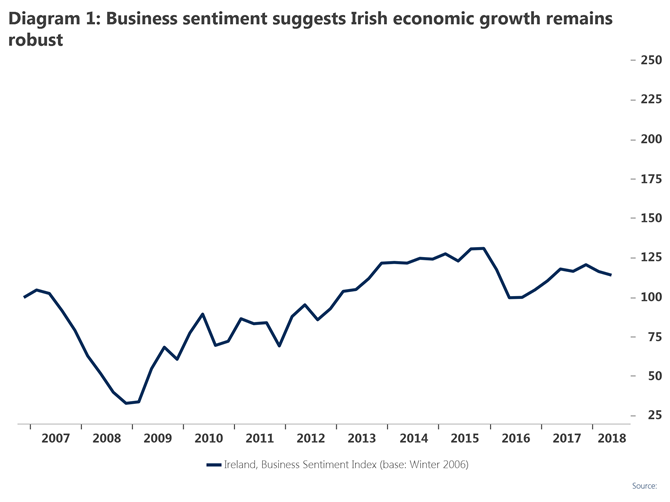 The KBC Bank/Chartered Accountants Ireland business sentiment index slipped to 114.2 in summer 2018 from 116.4 in the spring quarter. The latest reading is the weakest since that of spring 2017. However, It should be noted that responses signal continuing if more guarded confidence about the future as there was still notably more positive than negative responses to questions about the outlook for business and the broader Irish economy even if the gap between the two narrowed marginally since the spring survey.

As diagram 2 below illustrates, Irish based firms reported a pick-up in business volumes in the past three months with 54% of firms seeing stronger activity levels against just 7% experiencing weaker conditions. The improvement was broadly based but particularly marked in the case of firms in the food and construction sectors. 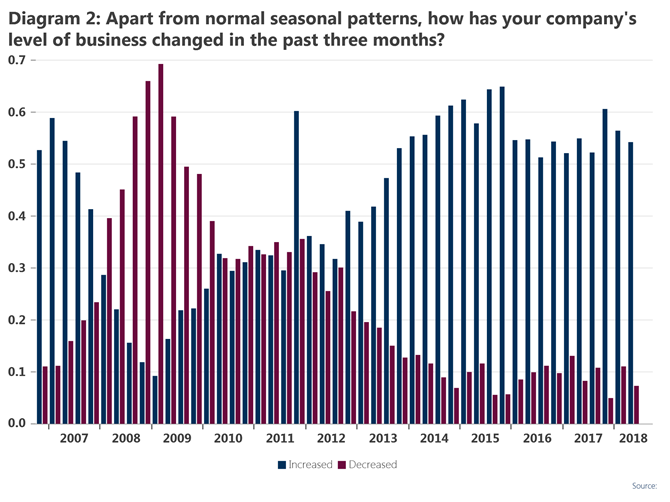 In marked contrast to their experience in the past three months, companies downgraded their outlook for the coming quarter. Although a strong majority still envisage stronger activity in the coming quarter- 51% against 6% anticipating weaker activity, as diagram 3 below indicates, this element of the survey posted its weakest reading since the autumn of 2016 (in the aftermath of the UK’s Brexit vote).

The pull-back was seen in all sectors but was particularly marked in companies focussed on consumers and those in the business service area. This pattern hints at a very generalised ‘uncertainty premium’ affecting the outlook at present rather than very specific concerns such as international trade tensions that might be expected to weigh on manufacturing firms in particular. 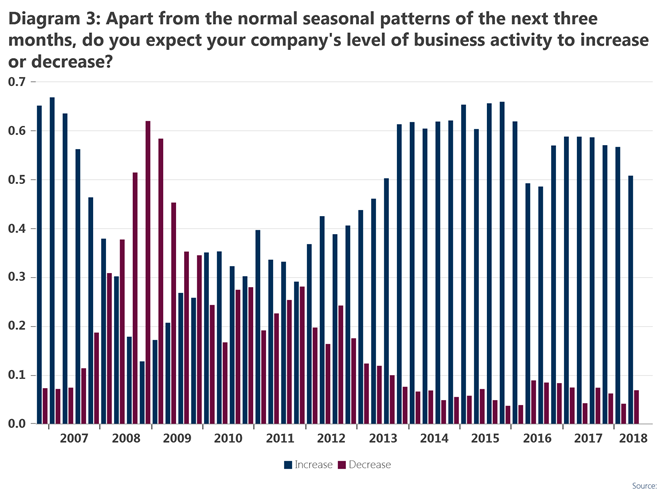 The pull-back in expectations by companies focussed on the Irish consumer also seems consistent with evidence of a moderation in consumer spending growth suggested by subdued increases in the value of retail sales or disappointing indirect tax receipts.

All sectors reported stronger employment trends of late but the improvement built momentum among manufacturing firms while the pace of job gains in companies focussed on the consumer and in construction moderated somewhat compared to the spring quarter. 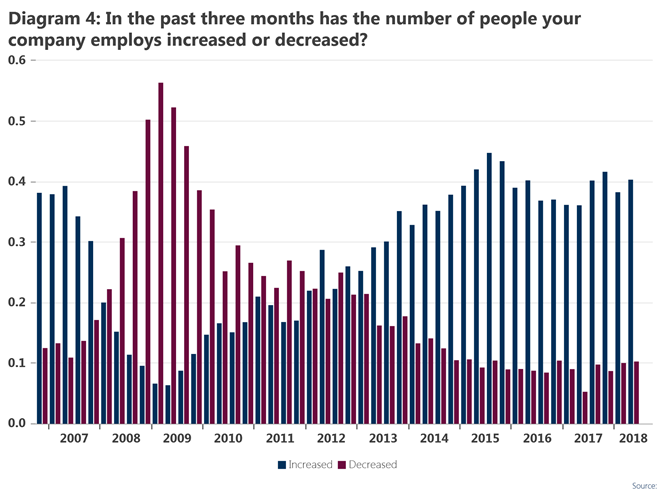 Corporate Ireland’s sense of how the Irish economy as a whole has been evolving of late was marked down modestly in the summer survey. Again, it should be emphasised that the mood overall remains positive, with 36% of those surveyed more positive than three months ago and just 14% less positive. However, as diagram 5 below indicates, both of these responses are less favourable than in the previous survey, suggesting companies are a bit more guarded in their outlook now than they were three months ago. 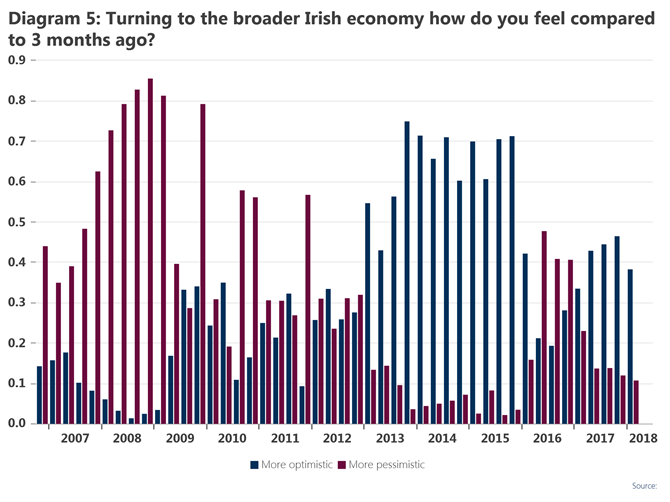 As is normal in the business sentiment survey, we asked a number of additional questions on topical issues.

In light of the tortuous process surrounding the UK governments recent publication of its white paper on ‘The future relationship between the United Kingdom and the European Union’, we felt it might be useful to get a reading on how Irish Business senses the Brexit process is evolving. We began by asking companies how likely they felt it was that the UK could exit the EU completely in March of next year without agreement on a transition or implementation period.

Irish based companies’ assessments of the likelihood that the UK could ‘crash out’ of the EU in a little over eight months’ time are shown in diagram 6 below. As the diagram indicates relative few firms attach a large probability to such an outcome with less than 7% of respondents thinking such a ‘crash’ has a probability of more than 65%. However, neither do the majority of firms entirely dismiss such a prospect.

A slightly worrisome aspect of these results is that in sectors most likely to be exposed to such developments such as food, manufacturing and business services, the proportion of firms attaching less than a 10% probability to a ‘crash exit’ is notably higher than elsewhere. It would be problematic if that expectation lessened the degree of preparation in these companies for such an eventuality.

When we aggregate the responses given to this question, we derive an overall figure that suggests Irish based businesses attach a 32% probability to the UK leaving the EU as early as March 2019 and without the ‘safety net’ of a transition period. This implies that across the spectrum of Irish based companies the possibility of a ‘crash exit’ by the UK is regarded as a material risk even if it is not their central scenario. 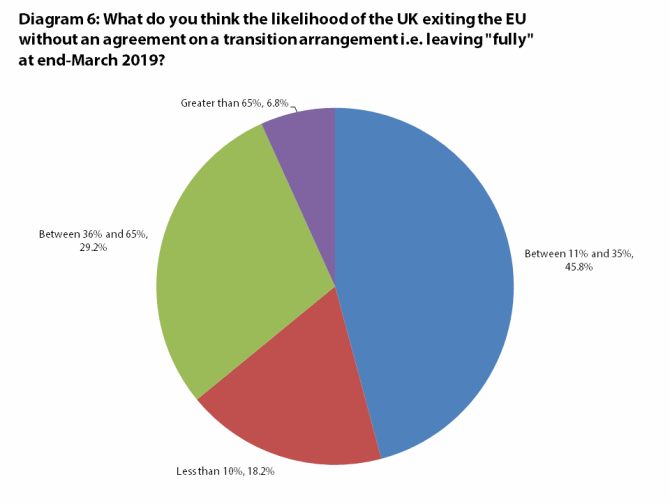 We then asked companies what impact there would be on their business if the UK were to leave the EU in March of next year without a transition deal in place. The responses shown in diagram 7 below suggest companies would expect very broadly based negative effects on their activity levels in such circumstances. Some 48% of companies envisage a worsening of the business outlook while just 4% would anticipate an improvement in their prospects.

These results highlight the broad reach of Brexit across the Irish business environment.  The sector reporting the greatest level of concern was the food industry with construction and consumer focussed companies also reporting above average levels of negative expectations in the event of  a ‘no deal’ Brexit.

Interestingly, slightly fewer than average manufacturing firms reported concerns of this nature. This could reflect a greater level of preparedness on the part of these firms given the predominance of exporting in this sector and/or it may be because many of them are focussed exclusively on markets other than the UK. In this context, an above average 33% of manufacturing companies indicated in responses to another survey question (see below), that the UK ‘s exit from the EU would have no impact on their activities. 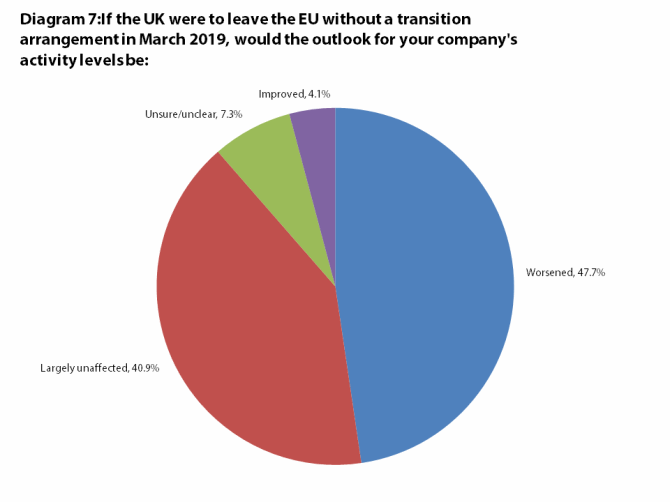 The summer survey went on to ask Irish based businesses to indicate the principal channel through which the UK’s exit from the EU would affect their companies’ activity levels. The results shown in diagram 8 below suggest only one in four firms sees no impact on their activity levels, highlighting the pervasive influence of Brexit whether that be direct or indirect.

Two concerns appear to dominate; market access and an increased documentation/regulatory burden. So companies appear worried about both ‘red ink’ and ‘red tape’ impacts on their operations from Brexit.

Some 21% of firms suggest the key issue for them was potential changes to UK market access. Not surprisingly, this concern was most frequently cited by food and manufacturing firms. It was also the dominant issue for construction firms and particularly important for companies in the business services sector.

Some 20% of Irish based businesses indicated the key issue for them arising from the UK’s exit from the EU was the prospect of increased customs documentation/ regulatory requirements. This finding is broadly consistent with the results of recent research by the Central Bank of Ireland that found potential for significant non-price impediments to trade.

This concern was most broadly expressed by firms in business services and property activities.  Perhaps surprisingly, given the practicalities involved in their operations, food and manufacturing firms expressed lower than average levels of concern about documentation/regulatory issues. This may simply be because UK market access is regarded as an altogether more important issue for these industries. It could also be that the international focus of such firms means they are used to dealing with complexities in the area of documentation and regulation. 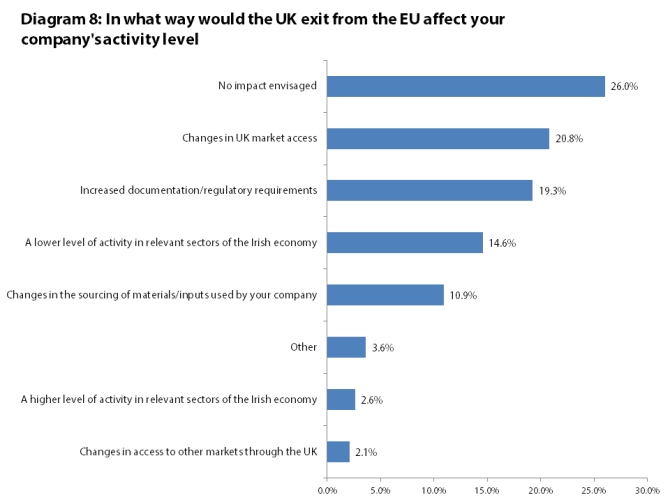 Both in light of the rapidly reducing timeline for Brexit and the publication of the recent UK white paper, we felt it might be instructive to assess whether Irish business’ sense of the consequences for them had changed materially of late.  As diagram 9 below shows, 68% of companies have not seen any change in their perspective of late.

Only 7% of respondents felt that the impact of Brexit on their companies had become clearer of late while a worrisome 17% felt it had become less clear.  The combination of a feared significant impact and continuing uncertainty underscore the need for a sharp focus on Brexit related issues by Irish business in coming months. 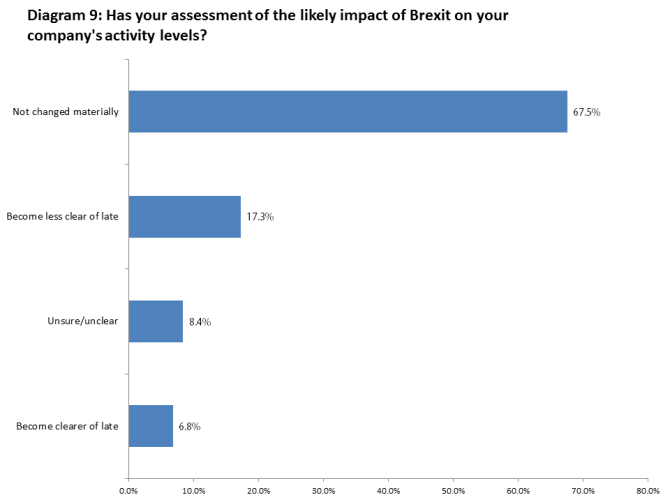 The summer survey also asked what business felt should be the key priority for Budget 2019. The responses shown in diagram 10 below suggest two issues command equal support, each accounting for 27% of responses. Irish based companies see tackling problems in areas of social infrastructure such as health and housing, and preventing the Irish economy from overheating as the main requirements for the upcoming budget.

While a non-negligible 16% of firms prioritise a further improvement in the public finances and a broadly similar number emphasise reductions in the personal tax burden, these issues are now seen as notably less pressing. Instead, the need to address serious ‘structural’ shortcomings in areas such as health and housing while reducing ‘cyclical’ concerns around a return to a ‘boom and bust’ path for the Irish economy could make for a challenging fiscal package. 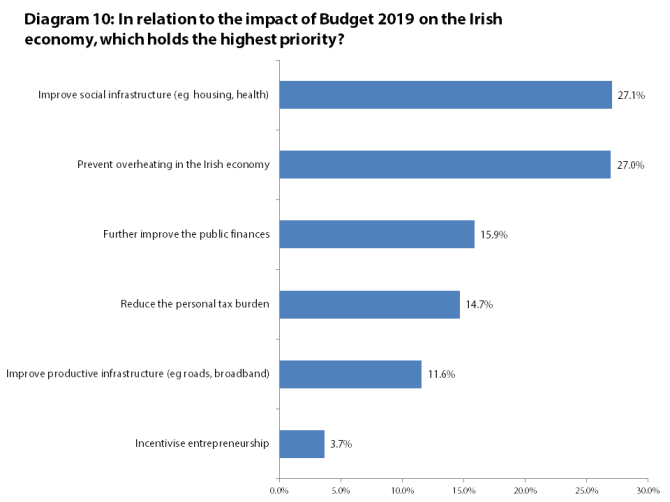 NOTE: The sample size in this survey is somewhat smaller than usual because we wanted to limit the time window to include the period around the release of the UK white paper on Brexit but to conclude the survey before the release of Irish national accounts data that might colour views on business conditions. The change in sample size has only a minor impact on the confidence intervals around the survey results.