…while shortfall in new supply has increased

Other CSO data suggest profound changes in occupancy rather than ownership in 2020. Will this persist post-pandemic?

Irish residential property price inflation increased to 3.0% in February, up materially from the 2.6% pace reported for January and translating into the fastest pace in two years (March 2019 +3.7%).The February data appear to confirm anecdotal reports of a marked firming in price trends of late that in view of emerging near term trends in demand and supply may have some further way to run.

As has been the case for the past three years, house price inflation has been notably more modest in Dublin than in the rest of the country and the February data show the gap in the respective year-on-year increases (Dublin +1.2% y/y, Rest of Ireland +4.7%y/y) at its widest since December 2019.

Encouragingly, the February residential property release also shows a renewed improvement in activity with transaction levels (market purchases by households) up a robust 7.4% year on year. Having slumped as much as 46% y/y last May, there was a progressive improvement through the second half of the year that was interrupted by a 5.6% fall in January.

The strong increase recorded in February from a pre-pandemic base month suggests the January number was a ‘blip’  and seems consistent with the reported buoyancy of market activity over the turn of the year. 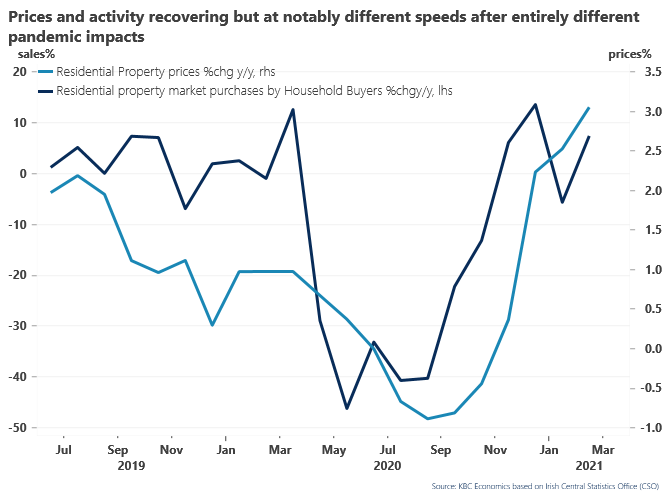 At present demand is notably underpinned by a decade long shortfall in housing transactions leaving significant numbers in properties ill-suited to their circumstances. The increased emphasis on the importance of adequate accommodation evident through the pandemic is further boosting prospective purchaser numbers.

An additional influence is the potential impact of some element of the ‘forced’ savings built up through the past year being channelled into home purchase. A wide range of estimates have been produced in relation to the scale of ‘excess’ savings overall but most fall into a €7-10bn region (we tend towards the lower figure).

Responses to a special question in the KBC Bank March consumer survey suggested that some 10% of consumers envisaged using the additional savings they had built through the past year for a specific purpose such as home purchase or renovation. As CSO data suggest market based household purchases  transactions amounted to €11.3bn in 2020, the release of ‘forced’ savings potentially might add somewhere between 5 and 10% to purchasing power in the housing market.

These considerations mean that in the short term, there is some prospect that homebuyer demand will be boosted well above ‘normal’ levels while health related restrictions cause supply to fall substantially short of such metrics. Curbs on construction through the first quarter mean new housing completions at best will fall modestly short of last year’s 20.7k outturn. This inflated imbalance between pent-up demand and postponed supply seems set to underpin property prices in coming months.

It should be emphasised that the current ‘bump’ in property price inflation is just one of several major impacts Covid-19 has had on the Irish housing market. Some of these are likely to prove temporary while others may prove to be more enduring. Distinguishing between ‘panic’ and permanent changes is not easy.

Some sense of the nature and extent of dislocation caused by the pandemic to the Irish property market is suggested by CSO data on households drawn from the Labour Force survey (and recently highlighted in the media) that suggest a marked adjustment in living arrangements occurred in 2020.

These data may well prove to have been compromised by sampling issues aggravated by the impact of health restrictions on survey responses through the past year. However, on face value, they imply a drop of around 200k in numbers living in in private rented accommodation in late 2020 from a year earlier and an increase of around 180k in numbers living in privately owned dwellings over the same period .

As these data suggest the number of dwellings in the State increased by just 30k through 2020 and other CSO data show that there were just 13.6k house purchases by first-time buyers in 2020, this seems to suggest that only a very modest portion of the change in living conditions seen in 2020 is the result of shifting preferences in favour of home ownership over renting.

Instead, these data likely capture sharp changes in in occupancy rather than ownership patterns probably stemming from the movement of substantial numbers of younger workers and students from their rented properties, most commonly, to their family homes in response to restrictions on mobility and a related adjustment to ‘virtual’ workplaces and college campuses.

A significant element of this shift in occupancy may prove temporary in nature. However, some portion is likely to prove more persistent and as we previously noted, the pandemic is likely to add to long term property demand by accelerating an increase in working from home and emphasising the importance of facilities and functionality in living arrangements. The key unknown is how long it may take the supply of new dwellings and the related provision of infrastructure to adjust to such shifts in housing demand.