A clear improvement is taking hold in the Irish economy

Irish economic growth data for the third quarter of 2013 show an increase of 1.5% from the second quarter. This confirms the picture emerging from other indicators that a clear improvement is taking hold in the Irish economy. Today’s data also serve to highlight some of the factors constraining the pace of recovery this year. However, the momentum evident in the third quarter numbers supports expectations of a notably healthier increase in GDP in 2014. Finally, these figures also imply the Government’s Budget targets should be met comfortably.

Even with today’s stronger data, it remains the case that the pace of growth suggested by GDP figures through 2013 is somewhat weaker than implied by many other indicators. As diagram 1 below shows, the trend in GDP this year is below that consistent with its long term relationship with jobs data. This is partly explained by compositional changes in growth towards areas that are more ‘job rich’ in the sense that any up- scaling of activity is likely to require significant new hiring. Certainly, the emerging improvement in domestic demand coupled with constraints on pharmaceutical exports would be consistent with a somewhat stronger jobs performance relative to GDP. However, as diagram 1 indicates, even through the domestic demand led years of the boom, activity consistently ran ahead of jobs growth. So, this year’s gap might hold out some possibility of upward revisions to GDP growth estimates in the future. 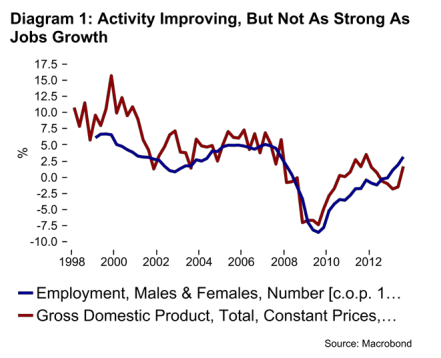 Today’s data still point towards a relatively modest increase in GDP for 2013 as a whole. As table 1 below indicates, we have changed the composition of our growth forecast slightly but we continue to see GDP growth of around 0.3% this year. Importantly, revisions to earlier data also released today paint a more encouraging picture in that they show a weaker than previously estimated start to the year is now  being followed by stronger positive momentum in the second and third quarters of the year. This revised pattern underpins the expectation of notably stronger GDP growth for 2014. In fact, it may even hint at some upside risks to our current forecast of a 2.0% increase in GDP next year. 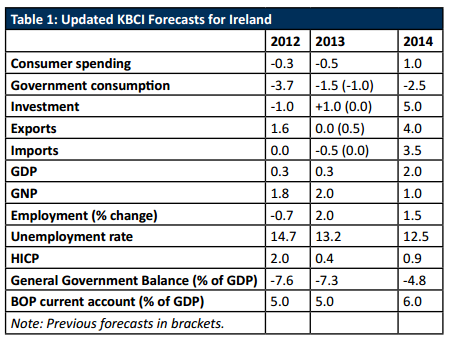 The most notable feature of today’s data is that domestic demand is contributing positively to an upturn in the Irish economy. Consumer spending (+0.9%) and investment (+10.9%) both posted gains for a second successive quarter, prompting a sharp improvement in domestic activity overall. Final domestic demand may still be marginally negative for 2013 as a whole but the current trajectory points towards a clear increase in 2014.

If the key message of today’s data is that an upturn is becoming established, there are also important pointers to its modest and somewhat uneven nature. While consumer spending posted a decent 0.9% gain in the third quarter, this was entirely due to increased purchases of cars. Anecdotal evidence from retailers of a soft start to the Christmas spending season is consistent with the evidence of the KBCI Bank/ESRI Consumer Sentiment Survey that household finances remain under pressure.

While jobs growth should assist in time, the influence of Budget adjustments and minimal income growth together with ongoing uncertainty may remain more powerful and less helpful determinants of Irish consumer spending in the near term. As such, we retain our subconsensus forecast of a decline of 0.5% in consumer spending in 2013. The subdued trend in consumer spending would tend to support the rationale for an adjustment in Budget 2014 that erred towards the lower end of the expected range. However, we are upgrading our forecast for investment modestly on today’s numbers.

Today’s data also show that exports fell for the second time this year, albeit marginally (-0.8%). This indicates the constraining influence on Irish economic features of a hesitant global upturn. Again, recent developments in the US and UK economies point towards a healthier external backdrop for 2014 but progress may be solid rather than spectacular.

The pick-up in growth in the third quarter makes it more likely that the Government’s forecast for nominal GDP, which is the denominator in the target deficit/GDP ratio, will be met. With exchequer data suggesting that the main Budget aggregates are set to finish the year somewhat better than envisaged, this suggests the formal fiscal targets expressed in terms of GDP should be comfortably met.