Pull-back in outlook for household finances reflects many possible drivers

Irish consumer sentiment fell back to 102.4 in August from 107.6 in July, leaving the index broadly in line with the June reading of 102.1. The sentiment index has not moved in the same direction in successive months since last November. This see-saw pattern likely reflects a substantial element of uncertainty about a range of threats to the broader economic outlook as well as the lack of any sharp improvement in the financial circumstances of the typical Irish consumer of late.

The August reading also hints that Irish consumers, like their counterparts in many other countries, may be increasingly concerned about the global economic outlook and the particular threats posed by Brexit and increased tensions around international trade.

The slippage in Irish consumer sentiment coincided with notable weakness in comparable indicators for the US and Euro area in August as the diagram below illustrates. The monthly drop in the University of Michigan consumer sentiment index for the US was relatively modest but sufficient to push sentiment to its lowest level since January and stemmed from a pull-back in spending plans. 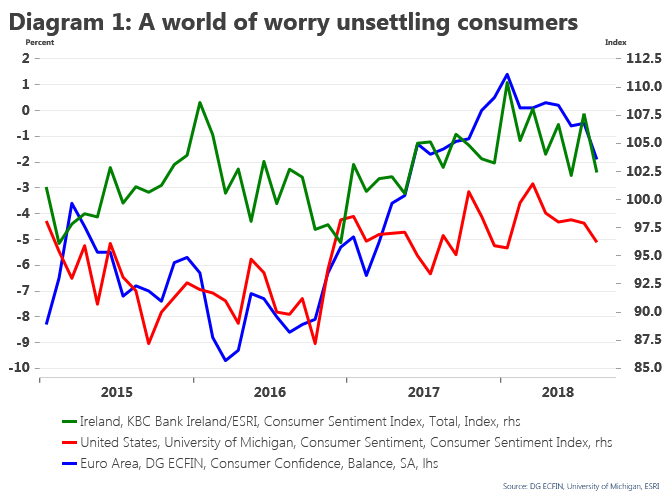 As in Ireland, recent sentiment readings for the US have suggested that the American consumer is more cautious than a stream of strong ‘macro’ data from the ‘States might imply. In part, this reflects uncertainty about trade policies but recent readings might also owe something to an emerging ‘late cycle’ mood in which consumers are increasingly focussed on threats to their living standards.

In the Euro area, 13 of the other 18 states registered a decline in confidence in August reflecting a notable step-up in concerns about unemployment. As a result, sentiment worsened to its weakest level since May 2017.

In contrast, UK consumer confidence saw an unexpected bounce in August. Although sentiment on the other side of the Irish sea remains relatively gloomy, we can’t explain the small bounce in August in a month in which Brexit confusion intensified and the Bank of England raised interest rates.  For these reasons, we could envisage renewed weakness in this indicator in coming months.

A broad mood shift rather than a single concern

As was the case in the two previous months, all of the five main elements of the Irish consumer sentiment survey moved in the same direction in August. This suggests recent changes in sentiment are being driven directed by broad-reaching forces influencing the general mood of Irish consumers rather than very specific issues in one area (as a seasonal adjustment process didn’t materially alter the reported monthly changes, it seems these forces are not simply statistical quirks).

Our best guess is that Irish consumer sentiment is significantly affected by the volume and tone of Brexit related commentary. Through the survey period was a notably increased focus on difficulties emerging in the UK government’s proposals as well as a warning from the IMF of Ireland’ s particular vulnerability to economic fall-out from the UK’s exit from the EU.

We think Brexit concerns were a key factor in causing consumers to further downgrade their assessment of the outlook for the Irish economy as a whole. This was the most negative element of the August survey and expectations weakened to their lowest level in fourteen months.  It should be noted that there is still a solid sense that the Irish economy is set to grow further but there has been a significant downgrade of the outlook of late. This is reflected in a notable slippage in the balance of positive and negative responses on the 12 month outlook which dropped from 52:14 in July to 46:21 in August, implying a notably more cautious view of economic prospects.

We think three distinct considerations are making Irish consumers more circumspect about the outlook for the Irish economy at present. First and foremost is the elevated uncertainty around a host of issues including Brexit, trade tensions and global tax policies that mean the persistence of the current upswing is notably  less certain than would normally be the case at this point in the cycle. In turn, this means that rather than the normal ‘accelerator’ forces that would cause the upswing to intensify and spending to increase faster, consumers are focussed on some possibility of an abrupt stop.

A second influence which is being felt in many economies is the limited flow-through at least thus far of stronger economic growth into more broadly based gains in household spending power. Limited wage growth has been a key feature of longer-lived recoveries in the US and UK. The sense that the Irish upswing has underperformed in this area may also be weighing on consumers’ perceptions as to how the economy is actually performing and influencing their expectations in this regard.

A final consideration in this regard could be related to the exceptional measurement issues around Irish economic growth. Just before the survey period, new GDP data were published for 2017 and the first quarter of this year. These show that in early 2018 real GDP was some 52.7% higher than the pre-crisis peak of late 2017. However, the spending power of the average Irish consumer is still about 6% below its pre-crisis peak. The scale of discrepancy between these two numbers may also be colouring views on the prospective performance of the Irish economy.

The decline in the jobs element of the sentiment index in August wascomparatively modest particularly in relation to that seen in relation to broader economic prospects. In part, that reflects the subdued nature of the jobs component of the survey in recent months. In addition, as official jobs data for Q2 confirm, employment growth remains on a strong trajectory, further illustrated by a continuing sequence of new job announcements through the survey period.

However, there were also a couple of job loss announcements during August and with average pay growth still modest, consumer perceptions of employment and earnings prospects seem to be more cautious and more vulnerable to setback than the relevant ‘macro’ indicators might suggest is warranted.

Irish Consumers also pared back optimism in regard to their household finances in August. While the monthly changes were not large, expectations for their financial circumstances through the next twelve months slipped to the lowest reading in 15 months, as the proportion of consumers expecting improved household finances declined to 24% (from 31% in July).

We think this likely reflects several influences. One aspect is the looming financial costs of ‘back to school’ and seasonal increases in energy bills.  A more general concern is the prospective hit to incomes if downside risks to the economic outlook materialise. Another possible issue is the subdued nature of income growth and a final element that may have unsettled consumers during the survey period was media warnings of possible tax increases in the upcoming Budget ’19.

Consumers also marked down, albeit to a smaller extent, their assessment of how their personal finances had evolved in the past twelve months but they made a larger adjustment to their spending plans. This likely reflects behavioural changes rather than a dramatic change in thinking in August. The concentration of spending into short bursts centred on periods of price discounting and/or seasonal requirements is an important feature of Irish consumer behaviour in recent years. This pattern also makes it notably harder to separate signal from noise in monthly data fluctuations. 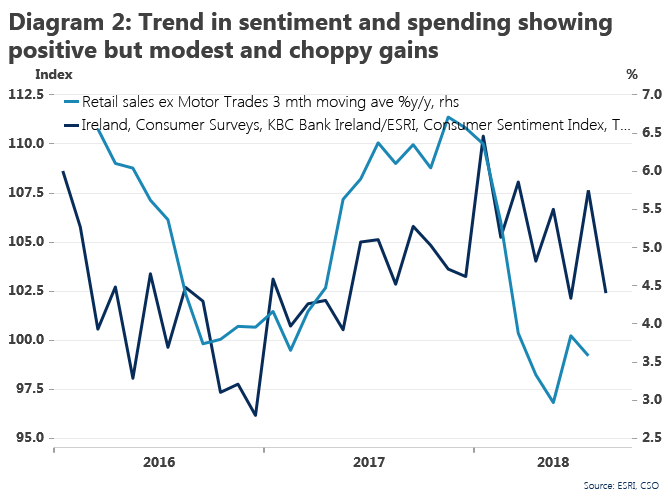 As the diagram above indicates, we think the trend in consumer sentiment and spending is still positive but it is choppy and the pace of improvement appears to have moderated of late. Significantly, spending is being boosted by strong increases in numbers working and living in Ireland whereas for the average consumer these developments are either largely neutral or possibly even negative-for example by pushing up housing costs.

The Irish economic upswing at present is primarily driven by strong increases in numbers living and working here that translates into a story of more Irish consumers rather than the average Irish consumer being able and willing to spend more. Consequently, a distinct absence of ‘feel-good’ remains a notable feature of recent consumer sentiment readings.