Today’s exchequer returns for November paint a picture of a generally healthy Irish economy but one facing notable challenges in terms of moving to a path of growth that is sustainable in the medium term.

A related speech today by Minister for Finance, Pascal Donohoe, sets out some very broad parameters for fiscal policy that should provide significant space to meet some of those challenges- provided the ample scope for adjustments to public spending and taxation is used wisely.

The buoyancy of corporation tax revenues continues to reflect the onshoring of activities by the multinational sector but there is also some contribution from the improved profitability of business in a solidly growing Irish economy.

The health of the Irish jobs market is seen in the 8.6% increase in income tax receipts for the first eleven months with a very strong outturn for November hinting at particular strength in non-PAYE incomes. However, overall income taxes are just 0.8% ahead of expectations for the first eleven months, suggesting economy-wide income growth is strong but not spectacular.

The sense of a cautious Irish consumer, suggested by the KBC Bank sentiment survey, is also supported by Vat receipts up 5.4% y/y and running some 1.1% behind profile for the first eleven months. The combination of Brexit concerns and falling retail prices is also evident in the 3.0% VAT shortfall for the month of November alone.  A shortfall in Excise receipts is partly due to the same factors but also reflects technical issues.

Encouragingly, the increase in exchequer spending remains marginally (-0.9%) below profile but a 6.6% rise in the first eleven months emphasises the strong momentum in public outlays. The 5.1% y/y rise in current spend and 23.4% y/y increase in capital spend points to a necessary upscaling of public investment but the key question is whether this pace of investment spend can be managed efficiently.

In a speech earlier today, the minister for Finance set out medium term targets for the public finances entailing the achievement of a budget target of 1% of GDP by 2022 and a debt to GNI* target of 85% by 2025. This is designed to address threats  to the public finances such as a possible future weakening in corporation tax revenues.

Significantly, the stated targets are somewhat less ambitious than those set out in the Budget 2019 documentation that, unlike Budget 2020, was formulated on the basis that a hard Brexit is avoided and consequently provides a scenario that is more comparable to current conditions. Budget 2019 envisaged  a  surplus of 1.1% of GDP in 2022 and a debt to GNI ratio of 84.5% by 2023. On this basis, our sense is that these new targets will not be too demanding if the Irish economy avoids a major adverse shock.

More significantly, previous problems in Irish public finances did not stem from inadequate deficit or debt targets. They reflected major issues about the quality of spending and the spread of revenues as well as the general volatility of economic conditions. As the diagram below indicates, Ireland’s public finances looked to be on an eminently sustainable path fifteen years ago and recording similar surpluses and much lower debt levels but that changed rapidly and dramatically. 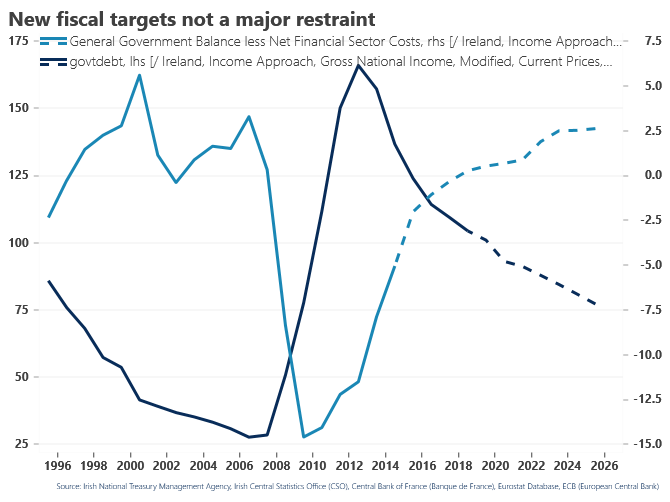 In circumstances where there may be concerns about the sustainability of receipts such as corporation taxes, the issue is to plot a path for spending that is not predicated on the persistence of those revenue flows. In circumstances where the cost of debt is exceptionally low at present and the Irish economy faces substantial and pressing challenges in areas such as housing, health, climate change and digital infrastructure to name but some of the more obvious, it might be preferable to set out spending programmes that are specifically focussed and, more importantly, clearly time, amount and conditions-bounded rather than attempt to set numerical boundaries for deficits and debt and then seek to meet the economy’s structural requirements within such envelopes.