Reasonable September result emphasises that easing in growth is modest

2016 deficit may be marginally lower than predicted

Exchequer returns data for the nine months to end September suggest that the Irish economy may be going through a slightly soft patch at present although marginally better than expected receipts for the month of September itself suggest conditions remain fairly healthy and the extent of any slowdown in growth should not be exaggerated. The sluggishness in tax receipts of late also owe something to subdued wage and consumer price inflation, but we think the latest easing is likely to reflect more modest activity growth rather than more intense disinflationary pressures of late. Overall, today’s exchequer numbers remain broadly consistent with our forecast of a reasonably robust gain of about 4% in Irish GDP for 2016 as a whole.

For the first nine months of 2016, tax revenues are up 5.7% y/y and €484mn ahead of target, but this conceals a marked weakening in the most recent three month period. For the third quarter of 2016, tax revenues were 1% lower than in the corresponding period of 2015, which represents a clear slowing from the 9.2% rise seen in the first half of the year. This was unexpected in as much as tax receipts were € 258 million below profile in the third quarter in stark contrast to a €742 million outperformance in the first six months.

It is important to emphasise that the trend in tax revenues doesn’t map onto economic activity in a mechanical way. Moreover, in aggregate, tax revenues should still end the year materially ahead of target. That said, the underperformance of headings such as income tax and VAT, albeit modest, still appears consistent with some loss of momentum in the Irish economy.

As an aside, we would also note that while corporation taxes are well ahead of profile—they are only running modestly ahead (+5.4%) of last year. So, there is little in these numbers to suggest surprise revisions to 2016 GDP on the lines seen in 2015.

Public spending has shown a relatively modest increase thus far in 2016 and voted outlays are €465 million below profile and up just 1.3% year on year. While this suggests a strong capacity to control spending it may be heavily influenced by the application of new fiscal rules that could mean spending will tend to be back loaded in the future.

Having reduced its deficit below 3% of GDP in 2015, Ireland has moved from the corrective arm to preventive arm of the EU stability and growth pact. Hence, the EU fiscal rules relevant to the Irish Budget arithmetic are slightly different this year and now incorporate a ceiling on public spending growth. This change might lead to a measure of caution in the early part of the year followed by an element of catch-up in public spending in the final months. 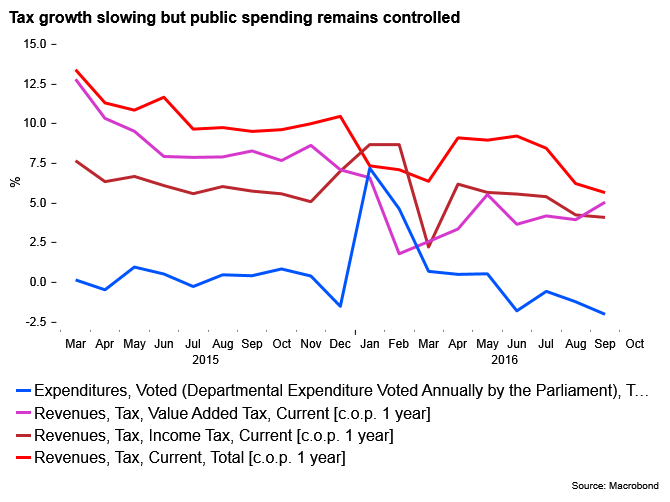 The diagram above hints that lower than envisaged growth in public spending should more than offset any emerging moderation in the pace of increase in tax revenues. With interest payments on Government debt also running some €129 million below target, today’s data hold out the possibility that Ireland’s public finances will again end the year somewhat better than envisaged. In the absence of a late surge in corporation taxes, the outperformance may be relatively modest. We think that the 2016 government deficit could be a little lower than the official target of 0.9% of GDP, possibly emerging at around 0.7% of GDP.

Today’s exchequer data won’t materially alter the contours of Budget 2017 whose parameters have been set for some time. These data may encourage a little more caution in relation to expectations for the trajectory of tax revenues through the year ahead but they also suggest a welcome capacity to deliver controlled increases in public spending on a consistent basis.

At the margin, today’s figures might justify a slightly more supportive fiscal stance in next week’s Budget but the constraints imposed by EU fiscal rules appear to offer very limited leeway for 2017 even if the arbitrary nature of these EU rules means that notably greater ‘fiscal space’ may open up in subsequent years because of a likely upgrading of Ireland’s ‘potential’ growth outlook.