• Details suggest decline in domestic demand may be close to an end while export growth remains resilient.

Preliminary GDP data for 2012 (and the initial estimate for the final quarter of the year) suggest the Irish economy is making continued progress on what remains an extended turnaround. Signs of an easing in the intensity of weakness in domestic demand and evidence of continuing resilience in Irish exports against a difficult external backdrop are particularly encouraging aspects of today’s data. The increase in GDP in 2012 at 0.9% was somewhat stronger than we expected (+0.5%) as was a flat quarterly outturn for the final three months of the year. This suggests that our current expectation of a 1.3% GDP gain in 2013 should be able to withstand any impact from renewed worries about the Euro area of late.

As diagram 1 below indicates, Irish GDP growth was notably stronger than the Euro area average in 2012 and continuing outperformance is likely this year. There are several other positive aspects to these numbers. First of all, an upward revision to the money value of GDP of about €0.5bn, together with stronger than expected end year Budget data, means Ireland’s General Government deficit for 2012 is now estimated at 7.6% of GDP compared to an original target of 8.6% of GDP. Indeed, last year’s outturn means the 2013 target has been reached a year ahead of schedule–although it will be very hard to repeat this sort of outperformance. Separate balance of payments data released today show a current account surplus of some 5% of GDP in 2012, up from 1.1% of GDP in 2011. This is an exceptional number and suggests a capacity to generate external earnings that will make the resolution of domestic imbalances within the Irish economy notably less difficult than would otherwise be the case. In these respects, today’s data emphasise the gap between Ireland and the performance of the other ‘troubled’ Eurozone economies. As a result, they should help underpin the improvement in financial market sentiment towards the Irish economy. 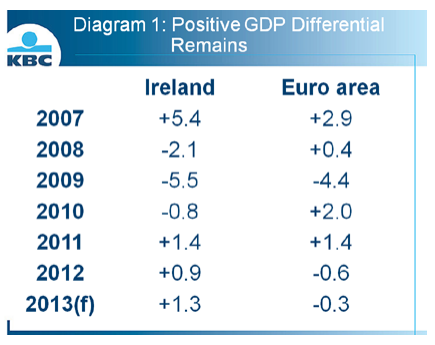 Some Signs Of Rebalancing

The details of today’s GDP release suggest that pressures on domestic economic activity have eased somewhat of late. This likely reflects the fact that the adjustment is notably further advanced in Ireland than in many other countries. As diagram 2 indicates, the drop in domestic demand last year was the smallest since the crisis began and quarterly data show domestic demand picked up in both the third and fourth quarter of 2012 (+0.7% and +1.0% respectively). Back to back increases in consumer spending were consistent with the recently reported improvement in employment through the second half of the year. Today’s data also show a sharp fall in construction output in the third quarter (-9.5%) was more than offset by a strong rebound in the final quarter (+10.1%). We think domestic demand will remain under pressure in 2013 as Budget 2013 implies a significant hit to household spending power and construction output is likely to remain depressed. However, consumer spending may fall less through the year ahead than we previously thought. As a result, we have revised our forecasts for household spending for 2013 from -1.0% to -0.7%. 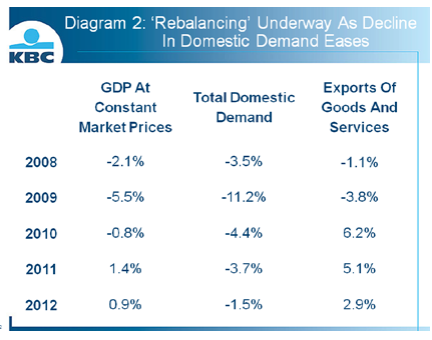 Alongside a somewhat better picture for domestic demand, today’s data confirmed the resilience of exports. We had feared a poor outturn for the final quarter because of the weaker European economy and the impact of the expiry of patents on some pharmaceutical exports. However, exports were broadly flat in the final three months of the year and annual export growth of 2.9% for 2012 was marginally above our forecast (+2.7%). This solid performance largely reflects the buoyancy of exports of services. Strong increases in software services (+14.7% in nominal terms) and business services (+11.5% in nominal terms) suggest that important areas of Ireland’s services exports may be less vulnerable to cyclical weakness abroad because they relate more to the ongoing drive for efficiency gains rather than the expansion plans of customer companies. However, we expect that Irish export growth is likely to remain reasonably modest in 2013 because of a challenging international environment.

As noted above, today’s data were somewhat stronger than we expected. As such, they represent a source of upside risk to our forecasts for GDP growth for 2013. Against this, renewed tensions in the Eurozone now centred on Cyprus, the downgrading of UK growth forecasts in yesterday’s Budget Statement and today’s very weak preliminary March purchasing managers data for the Euro area emphasise that the international environment remains very fragile. As a result, today’s Irish data imply there is a margin of comfort built into our current forecast for Irish GDP growth of 1.3% in 2013 but we would be reluctant to upgrade these forecasts just yet (see diagram 3). 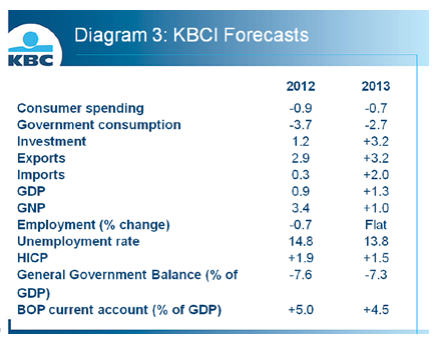 P.S. It would be unusual if the release of Irish national accounts data didn’t throw up some statistical peculiarities. In today’s numbers, it was exceptional strength of the rise in GNP (+3.4%) relative to GDP (+0.9%) in 2012. GNP has often been regarded as a better measure of Irish economic activity as it excludes the profits earned by multinationals in Ireland. However, recent GNP data have suffered from a similar distortion. A number of large international companies have redomiciled in Ireland of late. This means that the profits they earn in other countries appear as net factor income from abroad in the Irish national accounts, thereby raising GNP relative to GDP. A very crude measurement exercise suggests this had the effect of boosting Irish GNP by around 1-1.5% in 2012. Unusually small net factor outflows further boosted the GNP figure by close to 1%., implying that underlying growth in Irish GNP in 2012 was probably in the region of 1% or broadly similar to the growth in GDP.