The outcome of today’s ECB council meeting suggests there is a broadly shared view across the ECB’s governing council as to how severe the Euro area economic downturn is likely to be in coming months. ECB president, Christine Lagarde, emphasised that this will translate into a willingness to take exceptional monetary policy actions and to fully use the flexibility afforded by its mandate.

In current circumstances, it might have been preferable to use some of that flexibility and act more aggressively today and deliver a clearer message of the ECB’s determination to help ease the downturn and accelerate a turnaround.

Some sense of the ECB’s appreciation of the potential scale of economic downturn now underway was provided by Mme Lagarde’s indication that the exceptionally large quarterly fall in Euro area GDP of 3.8%in the first quarter of 2020  reported by Eurostat this morning could, according to ECB projections, be dwarfed by a prospective decline of 15% in the second quarter.

The diagram below gives some sense of the unparalleled nature of a drop of that magnitude. On the basis of trends seen through what has been a tumultuous couple of decades for the economies of the Euro area, a drop of this size might only be expected a couple of times a millennium. 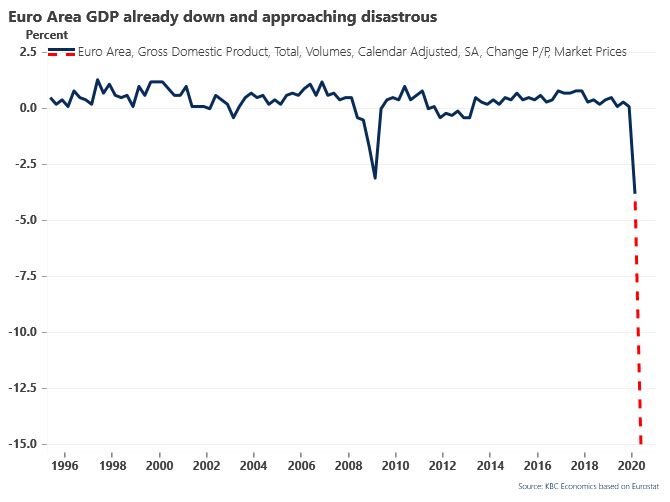 It is very positive and also notably different from the financial crisis of a little over a decade ago that the ECB recognises clear and present dangers to the Euro area economy. However, the tone of Mme Lagarde’s remarks may also hint at important divisions within the ECB Governing Council as to how much and what form of additional monetary policy support action might be required.

As a result, there is still some risk that any future ECB actions err on the side of being too little and too late in this respect, an outcome that is particularly problematic given major difficulties in mobilising an adequate fiscal response at the European level.

Importantly, the ECB announced some small but supportive tweaks to an increasing suite of exceptional policy programmes. These focussed on enhancing bank liquidity and lending capacity in the Euro area by tweaking the interest rate on the Targetted Long Term Refinancing Operations (TLTRO iii) 25 basis points lower for the period between June 2020 and June 2021 and by introducing  a new series of  Pandemic Emergency Long Term Refinancing Operations (PELTROs) running between May 2020 and September 2021.

As the ECB’s bank lending survey released earlier this week indicated, the nature of the current crisis seems set to prompt a drive for short term credit by enterprises and a pullback in borrowing by households on an unprecedented scale. In these circumstances, ensuring the capacity and willingness of banks to sustain the supply of credit is likely to require possibly frequent adjustments to ECB liquidity operations. In that context, today’s initiatives while positive are likely to be seen as modest rather than marvellous in that adjustments in these areas could have been larger and longer lasting. 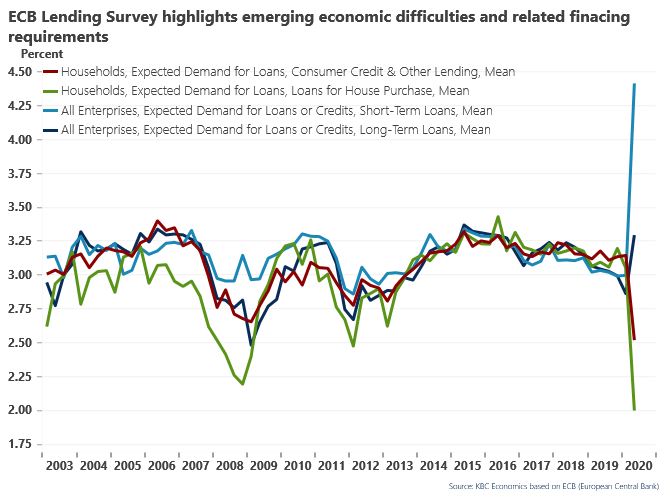 Mme Lagarde repeatedly emphasised the flexibility the ECB could and would use in relation to its various Asset Purchase Programmes. Most notably, today’s press statement indicated that ‘We are, therefore, fully prepared to increase the size of the PEPP and adjust its composition, by as much as necessary and for as long as needed. In principle, this suggests that both the scale and duration of the Pandemic Emergency Purchase Programme will be amended along ‘whatever it takes’ lines to achieve the ECB’s desired outcome of a rebound in activity leading to a recovery in inflation to its target range.

Unfortunately, Ms Lagarde indicated that there had been no discussion at the Governing council about increasing any of the parameters around its purchase programmes today. In circumstances where early, outsized and ambitious policy responses are required to support sentiment and economic sustainability, this is disappointing. This is doubly so because the absence of co-ordinated fiscal action at the EU level places the near term burden forcibly if unevenly on national governments. Market concerns in this regard might have played some role in a modest but unhelpful further divergence between ten year German and Italian bond yields in the immediate aftermath of today’s ECB pronouncements.

The modest nature of tweaks to the ECB’s bank financing operations and the absence of any increase in its purchase programmes might be partly explained by the fact that substantial actions have been taken through the past six weeks and the precise scale of current economic and financial difficulties remains uncertain. However, the scale of damage presently being inflicted on the Euro area (in common with the rest of the world) commends a playbook being followed by the US Federal Reserve focussed on acting early, often, aggressively and imaginatively to counter the downward momentum in activity.

There may be an inclination on the part of some ECB policymakers to avoid over-reacting. The ECB’s emphasis in its latest monthly account on the temporary nature of current difficulties, the observation today of uncertainty as to the implications of Covid19 for inflation in the policy-relevant medium term and the indication that further increases in ECB  purchase programmes hadn’t been discussed at this Governing council meeting all point in the direction of divided views as to how far monetary policy should stretch.

A further complication in this regard is Ms Lagarde’s relative inexperience in her position as ECB president and possible limitations in her understanding of the technical and theoretical considerations influencing policymaking in exceptional times. It is very clear that economics is not Mme Lagarde’s mother tongue and the contrast between her difficulties in this regard with the press conference performances of her predecessor may be of more than cosmetic importance given a health crisis where the role of the expert has become increasingly important.

Virtually from the day he became ECB president, it seemed very clear that Mario Draghi was driving ECB policy, frequently in directions where many Governing council members appeared extremely uncomfortable. In circumstances where bold policies are necessary, a strong understanding of both the required direction and the related detail  are important attributes.

The risk in this regard is that in spite of the significant measures adopted thus far, an ECB council whose members hold differing views as to how far the boundaries of monetary policy might reasonably stretch could be slow to deliver the actions the Euro area economy sorely needs and its standing with markets and Governments questioned. For the moment, this is not a major issue but economic and financial conditions are unlikely to improve in coming months in a manner that would end Mme Lagarde’s baptism of fire into Central banking.