ECB signals no rate rise until 2020 at the earliest

While soothing words and some promises were widely anticipated from the ECB today, in a break with tradition, it went further than expected. The ECB signalled a small but still significant change in its policy outlook today; It pushed back the earliest possible timing of it first rate hike beyond the end of 2019 and announced further long term funding arrangements for  Euro area banks (to replace those maturing through the next year).

Today’s announcement is a notable confirmation of market thinking that ECB policy rates will remain ‘lower for longer’. The surprise is that the ECB has acted to validate such thinking so quickly. Previously, the ECB stood accused of doing too little, too late. It can still be argued that today’s policy changes are relatively modest but, in light of the ECB’s track record, they are relatively early.

The catalyst for today’s ECB policy pronouncements appears to have been the combination of weaker than expected data through the past six months allied to poorer prospects for the global economy. This loss of momentum has been reflected in downward revisions to today’s new ECB staff projections for activity and inflation. As some concerns in this regard had been signalled at the January policy meeting, the new projections underpinned the case for what Mr Draghi referred to as ‘a need to take timely steps..to try to be proactive’.

Reflecting how low policy rates are at present and a likely reluctance to re-start net asset purchases having just stopped these in December, it is scarcely surprising that the main mechanism for making policy ‘more accommodative’ as Mr Draghi indicated was the case today was to alter the ECB’s forward guidance on when policy rates might eventually increase.

It should be noted that formally the ECB has only extended the commitment not to raise rates by three months. Previous guidance had suggested rates were expected ‘to remain at their present levels at least through the summer of 2019,…’ This was amended to read ‘at least through the end of 2019,..’ Mr Draghi indicated this alteration was a unanimous decision but as he also said some members had suggested a March 2020 date, it suggests a compromise intended to soothe concerns of some governing council members of a hawkish disposition. However, the key aspect of this wording is that it only identifies the earliest possible date for a rate increase.

Markets have long been attuned to the implications of the remainder of the sentence that notes ‘…and in any case for as long as necessary to ensure the continued sustained convergence of inflation to levels that are below, but close to, 2% over the medium term.’ Accordingly, while financial markets pushed back the expected date of the first rate rise somewhat following today’s ECB announcement, on current pricing this is not widely seen as happening until the very end of 2020 or early 2021- depending on whether the initial rate move is 10 or 25 basis points in size.

As the diagram below illustrates, the new ECB projections mirror revisions from other forecasters (most notably the OECD earlier in the week) in seeing economic growth being markedly weaker in 2019 than envisaged three months ago (+1.1% v +1.7%) but much of this adjustment reflects a statistical carryover from unexpectedly weak data around the turn of the year. While the starting point is thus much weaker, GDP growth is only revised down marginally for 2020 (+1.6% v+1.7%) and unaltered for 2021 (+1.5%).The softer momentum is concentrated on exports and investment and results in an unemployment rate of 7.5% in 2021 rather than the previously expected 7.1%.

Today’s downgrade of GDP growth is material but the weakening is not seen as persistent. However, unusually in the immediate aftermath of the announcement of policy measures, the ECB continues to see the risks as weighted to the downside, implying no early expectation of any marked improvement in sentiment and the potential need for further supportive measures should such risks materialise. 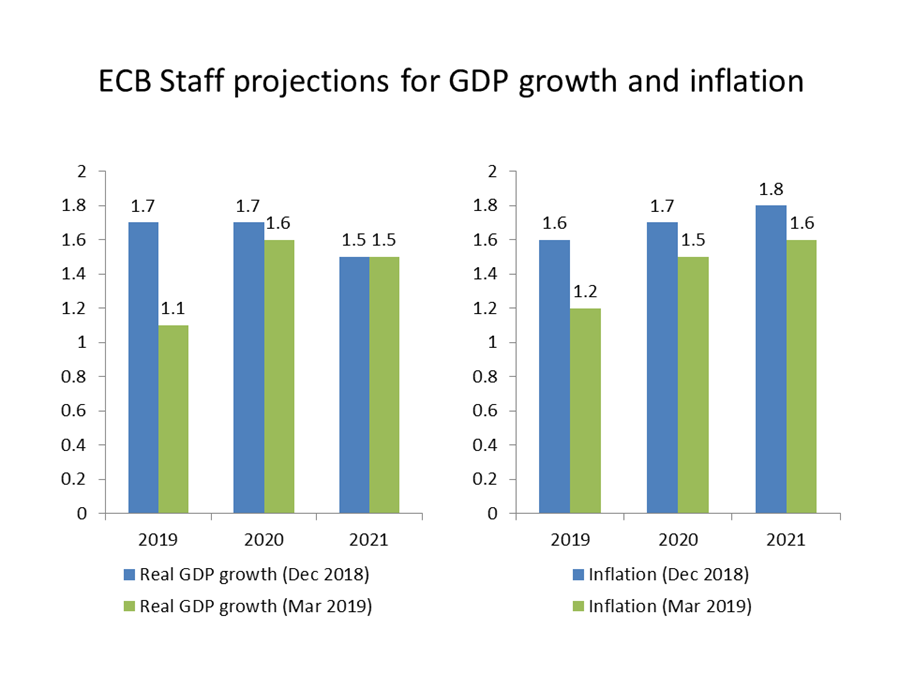 Arguably of greater significance to the policy outlook, the diagram above suggests the ECB has become a good deal less convinced of a clear upward path in the trajectory of inflation. Consumer prices are now seen rising 1.2% in 2019 compared to 1.6% in it is December projections. More significantly, inflation rises more slowly than previously thought in 2020 (+1.5% v +1.7%) and only reaching 1.6% rather than 1.8% in 2021.

As the new figure for 2021 is some way short of the ECB’s target of an inflation rate ‘below, but close to, 2% over the medium term’, now appears it underpinned the case for the measures announced today as well as emphasising how distant a material tightening may be. The ECB is less confident that inflation pressures will build forcefully in coming years. This may partly reflect slower growth but, as in the US, this could also reflect more structural headwinds to an inflation pick-up.

Alongside the change to forward guidance, the ECB also announced today that a new series of Targeted Long Term Refinancing Operations providing two year funding would be launched at a quarterly frequency running from September 2019 until March 2021. Again, the new projections might justify ensuring this instrument remaining available but Mr Draghi’s reference to ‘congestion’ affecting bank funding suggest specific concerns in this regard rather than ‘macro’ issues may have been the primary motivation for this decision.

Today’s announcements are somewhat surprising in that they suggest notable ECB concern about the prospects for growth and, more particularly, inflation. In the near term this will weigh on the Euro and restrain Euro area bond yields. Furthermore, the introduction of the new TLTRO’s speaks of an interest rate and funding environment that would act to limit divergences between sovereign spreads.

While ‘lower for longer’ is the main message in terms of the outlook for Euro area monetary policy, markets will also reflect on Mr Draghi’s indication that the ECB is in proactive mode becoming more accommodative even if this largely verbal in nature. This may cause markets not only to postpone expectations of tightening even further, it could even lead to unrealistic expectations of further additional easing measures if growth and inflation remain subdued through to summer.

Taking a slightly longer view, it implies Mr Draghi will leave office without ever tightening policy, a development that may start to raise important questions about whether a notably different ECB directorate in 2020 will be agents of continuity or marked change.