ECB sends further dovish signal on rate outlook -even lower for even longer?

Not for the first time, the ECB may be at risk of overp-romising and under-delivering. Today’s ECB governing council meeting produced more clarity about its inflation goal but little indication as to how it might get to this seemingly distant target.

What markets see as a large and lasting gap between the current inflation outlook and the ECB’s commitment to reach it new symmetric target around a 2% inflation rate, even entailing a tolerance for a temporary overshoot, is likely to reinforce the view that ECB policy will have to remain even looser for even longer. At the margin, the new phrasing of how the ECB will assess progress in reaching its inflation target may even raise expectations of some further easing to come.

There were no dramatic revelations from ECB president Christine Lagarde, at the press conference that followed today’s ECB Governing council meeting, So, changes to market thinking are unlikely to be pronounced.

However, there were small but potentially important adjustments to the way in which the ECB formulates its assessment of the inflation outlook and also some slightly surprising aspects in relation to what was and wasn’t reviewed at today’s meeting.  Although the ECB decided to revise its forward guidance on interest rates, Mme Lagarde said forward guidance in relation to its asset purchase schemes hadn’t been discussed.

Three legs to an unsteady stool

ECB president Lagarde outlined what she described as the three legs to the ECB’s assessment of the inflation outlook in relation to its consideration of its policy stance. The first of these is that in contrast to the previous formulation that looked for ‘the inflation outlook (to) robustly converge to a level sufficiently close to, but below, 2 per cent within our projection horizon’, the ECB will now want to see ‘inflation reaching two per cent well ahead of the end of our projection horizon’.

When asked what this new phrasing might mean in practice, Mme Lagarde replied that the ECB would be focussed essentially on the mid-point in its inflation projection horizon. In practical terms, this would imply the ECB would need to see inflation rise somewhat sooner than previously envisaged to assess the success or otherwise of its current policy stance.

The second ‘leg’ of the ECB’s inflation assessment set out today focusses on the durability of the mid-projection inflation reading-by looking how inflation behaves over the remainder of the projection horizon-and, as such, is not a new consideration because it mirrors previous requirements for sustainable progress on inflation.

The third ‘leg’ outlined in today’s ECB press statement may not be new but the amended wording emphasising  that ‘realised progress in underlying inflation is sufficiently advanced to be consistent with inflation stabilising at two per cent over the medium term’ may imply a somewhat higher and more visible hurdle to future tightening -and by extension a lower bar to further easing- than the previous wording ‘envisaging convergence has been consistently reflected in underlying inflation dynamics.’

In circumstances where the ECB expects inflation to run at 1.5% in 2022 and 1.4% in 2023 while current underlying inflation is just below 1%, it could be argued that all three ‘legs’ of the ECB’s inflation assessment would seem to point to the need for longer and/or larger monetary accommodation. That could become an increasingly important issue as we approach the next set of projections that the ECB at the next scheduled policy meeting of the Governing council on September 9th. Although Mme Lagarde’s suggestion that the ECB will take each quarter’s projections as they come and ‘adjust what we need to adjust’ is unlikely to have been a signal in this regard.

ECB Council agrees in principle…. But in practice?

Although the possibility of a further easing could attract more attention before long, a more immediate issue for the ECB is to establish a fully shared view within the Governing council as to what the unanimously agreed new policy framework might mean in practice. Responding to a question at today’s press conference ECB president, Christine Lagarde said she would characterise the current message as that of a ‘steady hand’ -advocating patience and avoiding a premature tightening . In that respect, one immediate implication of the new framework is that it should serve to disarm calls from some of the hawks within the Governing Council to consider an early stepping down of the current volume of asset purchases.

Tellingly, the ECB said it hadn’t discussed forward guidance in relation to its Asset Purchase programmes at today’s meeting. Having increased the pace of buying through the Pandemic Emergency Purchase Programme for the past two quarters and with this programme scheduled to end in March 2022, it would appear that there is greater urgency in clarifying future intentions on this score than in relation to what is widely seen as the far less immediate prospect of an alteration in the ECB’s key policy rates.

ECB will remain accommodative but will markets remain unmoved?

The absence of any reference to Asset Purchase Programmes in today’s statement may point to markedly differing views within the ECB at present, possibly entailing a split as to both the direction and timing of any change in the volume of monthly purchases.

While it may be straight forward to agree what the new ECB framework means in principle, what this implies in terms of the practical roll-out of policy measures is far less clear-cut. So, while ‘looser for longer’ is almost a given at this point, exactly what that means in terms of weighing on Euro area interest rates and the exchange rate of the Euro is still very much in the early stages of a work in progress.

Today’s re-calibration of the manner in which the ECB assesses the outlook for inflation would on the surface argue for further easing. To borrow wording from the recent strategy review, current circumstances would appear to call for a forceful policy response. However, instead, most market assessments  concentrate on the  likely persistent nature of current policy settings.

While the ECB has set out a clear indication of its desired destination and its commitment to travel, we are still in the dark as to what will transport the Euro area to 2% inflation on a sustained basis. In recent weeks, markets have read the ECB as signalling even lower for even longer as the diagram below illustrates.In turn, this 'dependence' suggests scope for twists and turns in the path taken by market interest rates in the next couple of years. 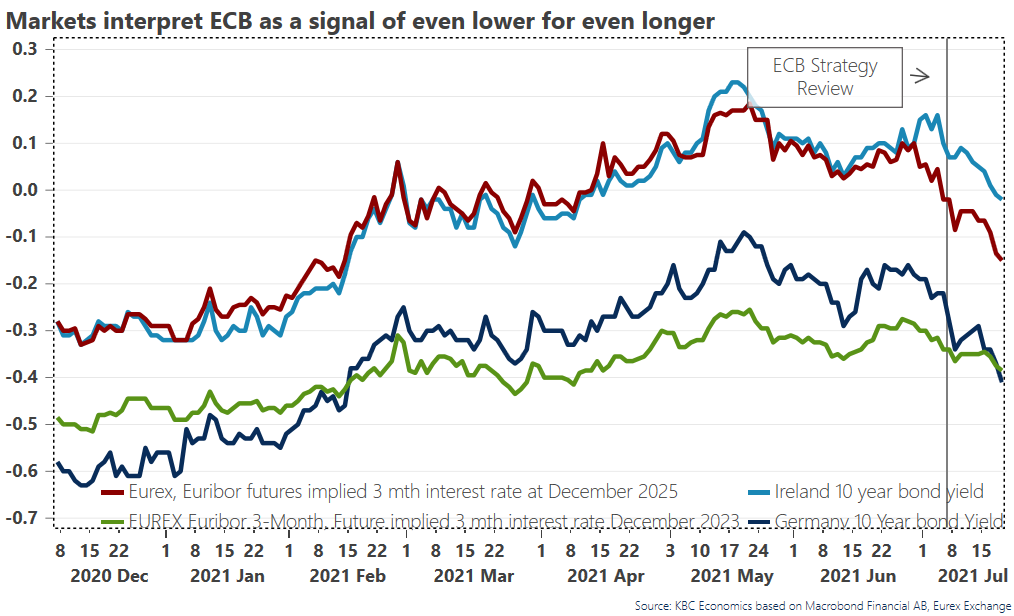