No change in ECB rates today but a surprise commitment to maintain rates very low.

• Draghi promises rates will remain ‘at present or lower levels for an extended period of time’.

• ‘Extended period’ should be seen in terms of economic data rather than calendar dates, but suggests no tightening until late 2014/2015 at the earliest.

• Forward guidance is a major change in ECB approach and amounts to a verbal easing.

Markets did not expect any change in key ECB interest rates today and in that respect they were not surprised. However, markets were also braced for a rather dull press conference from ECB president Mario Draghi and in that regard, Mr Draghi’s pronouncements came as something of a shock. His remarks keep alive the possibility of a further easing and, more importantly, in a radical departure he suggested no likelihood of tightening of policy for the foreseeable future.

Mr Draghi struck a notably more dovish tone than might have been expected today particularly in light of tentative signs of a limited improvement in the Euro area economy of late as well as uptick in inflation last month to 1.6%, a reading that puts it broadly in line with the ECB’s target of ‘below but close to 2%’. Mr Draghi took the unprecedented step of committing ECB policy rates ‘to remain at present or lower levels for an extended period of time’. Although we previously suggested that the commitment to keep policy accommodative for ‘as long as needed’ first made in March represented a tentative step towards a measure of forward guidance, today’s announcement is an altogether more explicit and bolder departure from the ECB’s previous mantra of ‘we never pre-commit’.

Today’s ECB press statement also provides significant guidance as to what ‘an extended period’ might prove to be in practice. It is clear that economic data rather than calendar dates will determine when policy changes. That said, today’s commitment implies there should be no concern about higher policy rates for a considerable time. The ECB press statement indicates that the ECB’s ‘expectation’ of an extended period of accommodative policy is based on ‘the overall subdued outlook for inflation extending into the medium term, given the broad-based weakness in the real economy and subdued monetary dynamics’. By clearly linking its policy stance to economic conditions and to inflation prospects in particular, the ECB hopes to limit any threat to its credibility from today’s action. In light of last month’s ECB projections for 2014 that show subdued inflation (circa +1.3%) and lacklustre activity (GDP growth of +1.1%), only the prospect of a dramatic acceleration in inflation and/or activity in 2015 would suggest any risk of tightening in policy within the next two years. Mr Draghi underpinned such expectations by emphasising today that an exit from current accommodative policy settings remained ‘very distant’.

How Threatening Are Recent Market Developments?

Mr Draghi also said there had been an extensive discussion of a possible rate cut today—a rather surprising disclosure given the rather more upbeat tone of his comments a month ago. Instead, he may have referred to this in order to emphasise ‘a downward bias’  to policy. We find it difficult to imagine that a cut today was a serious possibility given Mr Draghi’s acknowledgement that the ECB’s ‘baseline scenario’ of a gradual recovery ‘seems confirmed’. He noted arguments advanced for a further easing included some tightening in monetary conditions and weak monetary developments of late. Indeed, today’s ECB press statement highlighted ‘the recent tightening of global monetary and financial market conditions and related uncertainties have the potential to negatively affect economic conditions.

As diagram 1 below indicates, recent trends in financial market conditions as seen in the trade-weighted exchange rate of the Euro, expectations for interbank rates in late 2014 and 2015 ant the behaviour of bond yields either in the ‘core’ (as represented by Germany) or the periphery (as represented by Spain) don’t appear to have moved on to a particularly threatening trajectory in the past month. Neither is recent weakness in credit growth a new trend. At the margin, recent developments in financial markets might pose some downside risk to what is a fragile recovery and it may be that the ECB wants to limit such threats in so far as possible. However, we don’t think this adequately explains today’s announcement. 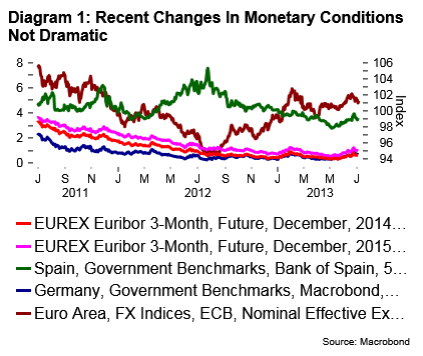 We remain of the view that only a significant deterioration in economic conditions would prompt the ECB to cut its key policy rates further. In many ways today’s forward guidance can be regarded as a substitute for further easing as it should influence the behaviour of businesses and households as well as altering market expectations. While Mr Draghi emphasised that the ECB still had a bias to ease and this includes the possibility of moving to a negative deposit rate, we think such actions would take the ECB into dangerously uncharted territory and would only arise in dire circumstances.

Today’s announcement may reflect a view that prevention is better than cure as far as continuing downside risks to activity are concerned. The commitment to an extended period of easing policy emphasises the ECB’s intention to nurture the tentative improvement in economic conditions seen of late. It is also intended to clearly prevent markets moving in an unhelpful direction by indicating that the bias in ECB policy is towards a further easing rather than any removal of accommodation.

We find it difficult to relate the policy commitment given by the ECB today to developments in the Euro area economy in the past month. Mr Draghi alluded to ‘an assessment of inflation in the medium term that justifies the new communication’ but he didn’t detail what this might be although he did highlight the recent tightening in monetary conditions. As noted above, we don’t think this represents a compelling argument for today’s announcement.

Instead, we can think of four possible overlapping arguments that can be made for today’s ECB policy guidance; (1) it could be that the ECB wants to emphasise that it is at a different phase in the policy cycle to the US Federal Reserve, (2) it may be that the ECB is worried that a period of heightened volatility in financial markets could undermine a tentative stabilisation in the Euro area economy, (3) the ECB may feel a need to modify its communication strategy to counter heightened uncertainty at present, and finally, (4) it could have decided on the basis of a an assessment of the economic outlook and its rather limited policy options that the risks of a ‘lost decade’ for the Euro area require it to pursue a somewhat bolder monetary policy strategy and forward guidance represents the easiest way to implement this without threatening its mandate.

These various considerations are not mutually exclusive but they likely rank differently in the assessments of the various members of the ECB’s Governing Council. However, because a range of factors point in the same direction, Mr Draghi was able to emphasise on a number of occasions the ‘unanimous’ nature of today’s decision to give a commitment to maintain accommodative monetary policy for an extended period.

The Past Six Months Have Been Noisy For The ECB

We would be surprised and disappointed if today’s announcement reflects a reflex response to the volatility caused by the Federal Reserve’s recent announcement of its intention to start tapering its asset purchase programme. Instead, we think that today’s announcement likely owes much to a detailed assessment of the health of the Eurozone economy and of the diminishing number of instruments available to the ECB to support a recovery. Limitations imposed by the ECB’s mandate and differences in views around the Governing Council table have complicated this work.

Through the past six to nine months the Euro area economy has generally appeared fairly weak while inflation has eased markedly. Frequently, through this period the trajectory of activity and prices has looked dangerously weak. An understandable tendency to react and possibly even overact to small changes in economic conditions seems to have coincided with a period of intense work into how the ECB might increase its limited capacity to respond to downside risks. This has led to a significant amount of volatility around the ECB’s monthly meeting and increased uncertainty about its intentions—a less than ideal outcome for a Central Bank that emphasises the medium term nature of its policy focus.

Mr Draghi May Now Hope To Be Dull

Unfortunately, increased volatility may be the inevitable consequence of a significant ‘work in progress’ in a very uncertain environment. Today’s unexpected ECB decision to provide a significant amount of forward guidance should provide notably greater clarity about the stance of ECB policy making through the next year to eighteen months and may act to counter the impact of increased volatility from other sources.

Mr Draghi emphasised today that the ECB sees its main task through the period as underpinning a recovery in the Euro area economy. By saying that key policy rates will remain ‘at present or lower levels’ the intention is to boost confidence in the real economy as well as limit any tightening in monetary conditions that might follow from developments outside the Euro area. By implementing what amounts to a verbal easing today, the ECB may hope to reduce downside risks to the outlook and thereby limit the likelihood that it will need to take any further action. If this works, we should look forward to notably duller ECB meetings for some considerable time.