ECB now stuck between a rock and a soft place

No lower for rates but much longer where they are?

Can Christine Lagarde keep the ECB on the sidelines?

Financial markets did not expect any major developments from today’s ECB Governing council meeting and the absence of any significant movement in market interest rates and exchange rates suggests the meeting lived down to those very limited expectations.

However, the details of ECB President Mario Draghi’s comments at the regular press conference underline the difficulties facing Christine Lagarde when she takes over from Mr Draghi at the beginning of November in trying to chart a course for monetary policy that helps rather than hurts its goal to put the Euro area economy and inflation on a healthier path than they are at present.

The meeting signalled the end of Mario Draghi’s eight year term as president of the ECB, a term that began with a cut in interest rates to ward off what were then seen as exceptional but temporary problems facing the Euro are economy and effectively ended with last month's decision to cut rates deeper into negative territory and restart Asset Purchases.

Mr Draghi suggested that the rationale for last month’s actions was to ‘cement the accommodative monetary policy stance.’ in what he described it today as ‘circumstances of a ‘continuously weakening medium term outlook’.

As Mr Draghi acknowledged today, what was seen eight years ago as an emergency transfusion of low interest rates for the Euro area economy is now regarded as a semi-permanent medication through markedly lower rates and accompanying unconventional monetary supports. Both market movements and comments by policymakers suggest we may be at the limits of supportive policy but we may remain at those limits for some considerable time.

As the diagram below illustrates, the ongoing slippage in the Euro area economy as evident in the deterioration in the composite purchasing managers survey has consistently been associated with a downgrading of interest rate expectations. However, while the ECB today indicated that ‘The comprehensive package of policy measures that we decided at our last meeting provides substantial monetary stimulus, which will contribute to a further easing in borrowing conditions for firms and households’, neither the September package nor recent softness in economic data have been reflected in market expectations for short term interest rates which have trended higher. 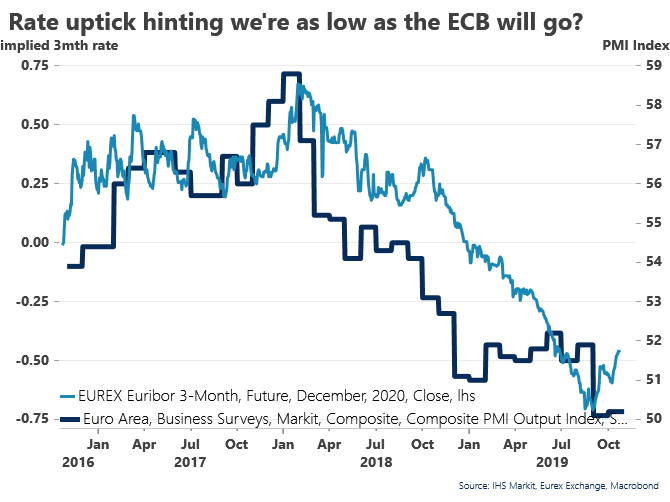 The sense instead that we are at or very close to the effective lower bound for ECB policy was suggested by Mr Draghi’s response when asked about the firming in market interest rates and the modest gain in the Euro in the aftermath of the ECB’s September policy meeting. Mr Draghi indicated that the Governing council that its goals in terms of the September policy changes was ‘largely achieved’.

He went on to add that market movements in the wake of the meeting may be partly due to market expectations that ‘went beyond the economic outlook’ and ‘may have been disappointed. He also suggested there may have been some adjustment in market thinking because ‘the lower likelihood of a hard Brexit or a cliff edge has improved the overall situation’ although he added that ‘medium term uncertainty is considered with concern’.

Significantly, Mr Draghi noted today that markets had ‘shown that they understood perfectly well our reaction function’. As the range of actions announced in September exceeded most expectations, this might suggest that Mr Draghi is validating a market judgement, expressed in the back-up in market rates and the slight firming in the exchange rate of the Euro since September, that the scope for further ECB easing is extremely limited.

The markets sense that the ECB is near the boundary of its easing efforts reflects a range of considerations. Among the more important are (i) the extent of publicly voiced opposition within the Governing council to the measures undertaken in September, (ii) technical difficulties constraining the extent of future bond purchases and/or further reductions in policy rates, and, last but not least, (iii) the departure of Mr Draghi who had a reputation for pulling the Governing council towards his dovish view rather than waiting for unanimous support.

If the scope for additional easing now appears notably more limited than market pricing might have envisaged a month ago, it is also the case that Mr Draghi suggested that the ECB will not have room to raise rates for some considerable time.

In contrast to the severe but seemingly cyclical problems the ECB faced when Mr Draghi took the helm, the difficulties now facing Ms Lagarde are seen to be more structural in nature. Mr Draghi reflected on much changed thinking in this regard by noting, ‘The IMF and all the observers would say yes interest rates are low and they may stay low for some time but then they will go up. Now, the sense of many discussions at the IMF is that they will stay low for a long time.’

In principle, these tensions might suggest that Ms Lagarde will preside over a very dull ECB, severely constrained from acting in either direction but the current situation is, at best, an unstable equilibrium. In circumstances where risks to economic activity remain to the downside, current market relief at the reduced risk of a near term ‘no deal’ Brexit could fade before long on the increased prospect of possibly fractious path to a fairly limited free trade agreement between the EU and the UK that threatens significant economic dislocation to both parties.

With fiscal policy still ill-prepared to play a more constructive role as Mr Draghi noted today by referring to ‘governance issues’ around the scale and scope of such actions, pressures for further ECB policy easing could quickly emerge unless we see a relatively speedy improvement in economic conditions and inflation prospects. Of course, if, unexpectedly, the outlook brightens significantly, calls for some unwinding of the current monetary stance will quickly grow.

An uncertain economic climate and an ECB council with notably differing views as to whether monetary policy could or should be eased further promises to inject more volatility into financial markets for the incoming Ms Lagarde in contrast to the calm that marked Mario Draghi’s departure from the ECB today.