• Unless data improve markedly, rate cut possible as early as next month and probable by June.

Today’s decision by the European Central Bank to keep its key policy rates unchanged was widely expected but markets were not entirely prepared for strong hints from ECB President Mari Draghi that policy may be eased further unless signs emerge relatively soon that the Euro area is stabilising and looks capable of delivering the modest recovery that the ECB envisaged would take hold in the second half of the year.

Concerns about the likely limited effectiveness of a further 25 basis point cut in the ECB’s refinancing rate and problems in finding a mechanism to improve access to credit across peripheral Eurozone economies mean a decision to ease policy further is not entirely straightforward. However, signs of a continuing deterioration in the most recent batch of survey data, indications that economic weakness was spreading to ‘core’ economies and broader policy problems with the Eurozone may force the Governing Council’s hand.

Any decision to ease policy is likely determined by the health or otherwise of the batch of short term indicators released in the next month or so. Back in May 2012, the ECB monthly report examined various short term indicators and suggested that two to three months’ data would be required to signal a change in trend. We have now had a sequence of poorer data through the past month or two. Evidence of a further deterioration in European Commission Sentiment data, in PMI indices and most importantly in surveys such as the German IFO and French INSEE may be sufficient to prompt ECB action as soon as the Governing Council’s next policy meeting on May 2nd unless there is very contradictory evidence in the form of unusual strength in ‘hard’ data such as upcoming production and spending numbers.

The tone of today’s press conference certainly suggests the ECB has prepared itself for the possibility of relatively early action. The opening paragraph of the press statement more than hinted at this though the inclusion of the following key sentence, ‘In coming weeks, we will monitor very closely all incoming information on economic and monetary developments and assess any impact on the outlook for price stability.’ If this hint that the matter could be decided in a couple of weeks wasn’t clear enough, in response to questions on a couple of occasions today Mr Draghi added that the ECB ‘stands ready to act’.

The change in tone from the ECB today doesn’t signal a completely new departure in thinking although it may reflect some shift around the Governing Council table towards a more downbeat view of near economic term prospects. It likely also reflects a possibly reluctant acceptance in some quarters that a measure of policy support may be needed both to sustain a fragile economy and the even more fragile acceptance of ongoing Budget austerity in a range of countries.

As far back as December of last year, Mr Draghi signalled a rate cut had been discussed extensively—and newswires subsequently suggested a majority of the Governing Council had favoured such a course of action at that point. However, a small group of influential council members won that day. Subsequently, slight signs of improvement in a range of surveys suggested that there might have seen a stabilisation in economic and fiscal conditions in the Euro area around the turn of the year. As a result, the tone of the January press conference was altogether more upbeat. Rate cuts were again discussed at last month’s Governing Council meeting when the ECB released a fairly downbeat set of projections, but Mr Draghi again tended to emphasise the positive in a still fragile situation. Even now, some council members may remain to be fully convinced. Mr Draghi said that a rate cut was discussed again today but ‘for the time being’ it was decided not to alter rates. This may partly reflect a desire not to shock markets. It may also indicate that a rate cut will be accompanied by other actions that have yet to be fully designed.

We think four influences have combined to push the ECB close to the point of easing policy again. First of all, as noted by Mr Draghi today, economic weakness has spread beyond the troubled economies of the Euro area to the ‘core’ of late. This weakness has been seen in a range of French data for several months but more significantly the most recent IFO and German PMI readings raise several doubts about the capacity of the German economy to withstand (and offset) weakness elsewhere in the Euro area. As diagram 1 indicates, the layering of deteriorating survey data on an already negative Euro area GDP trend of late implies the prospect of sustained weakness in Euro area economic activity through the coming year. Of possibly greater significance, recent evidence of a deterioration in the ‘core’ economies means difficulties can’t be attributed solely to problems in the transmission of the ECB’s monetary policy stance. The ‘shared’ nature of recent weakness argues that the overall policy stance of the ECB may need to be altered. 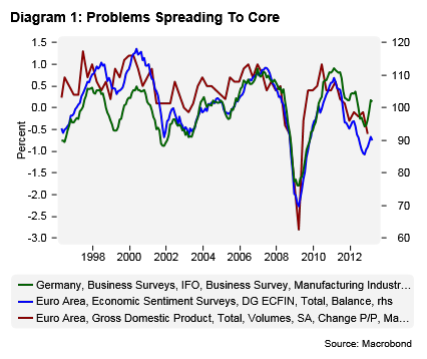 A second consideration for the ECB relates to the implications of recent difficulties in designing an assistance programme for Cyprus. The immediate fallout in terms of market reaction has been relatively limited and Mr Draghi suggested (possibly prematurely?) that this indicated the Euro area could now handle several problems without prompting a systemic threat. That said, it appeared that Mr Draghi had prepared himself for an altogether tougher grilling on Cyprus than he faced at today’s press conference.

At the margin, some spillovers from Cyprus will have a dampening effect on Euro area activity in the next couple of months. More importantly, the longer term consequences of problems in agreeing how a ‘bail –in’ should work could become altogether more threatening if concerns were to build in relation to Spain or Italy. Mr Draghi said the episode reinforced the determination of the Governing Council to do all it could to support the Euro. For this reason, a pre-emptive policy easing that improves the financial health of peripheral economy banks through cheaper ECB funding may appear altogether more attractive now than it did a month ago.

A third consideration is that in the face of disappointing economic data, the willingness and capacity of Euro area Governments to commit to continuing fiscal austerity is being questioned. In such circumstances, even modest policy action on the part of the ECB that suggests a sensitivity to the economic and political difficulties in sustaining multi-year adjustments would have much to commend it.

A fourth consideration for the ECB is the continuing weakness in lending aggregates and the consequences of that weakness for activity and employment. As diagram 2 below indicates, there has been a strongly negative relationship between trends in lending and trends in unemployment since EMU began. In many ways this overly simplistic diagram illustrates the nature of the dilemma facing the ECB at present. Mr Draghi rightly pointed to the strong actions the ECB had taken to ease a lack of funding capacity in the banking system. He also emphasised that the ECB couldn’t readily address a lack of capital or a range of forces causing heightened risk aversion. Unfortunately, for the ECB, Central Banks worldwide are seen as the mainstay of the economic system at present and as such are expected to continuously and aggresively counter adverse trends in activity and unemployment.

For this reason, we believe that together with a cut in its refinancing rate, the ECB will shortly announce a programme designed to boost lending, particularly lending to SMEs. This is unlikely to be a radical initiative. Mr Draghi sounded several notes of caution in this regard today. He emphasised that measures that worked ‘beautifully’ in some countries won’t work in others. He also suggested that the recent evidence from the actions taken by other Central Banks was not altogether encouraging However, Mr Draghi also said the ECB will continue thinking about the issue ‘in a 360 degree way’. In all likelihood, any initiative will be a hybrid entailing local features that will vary from country to country within the Euro area that will require a significant ‘local’ design contribution from each national Central Bank. Quite what form this programme might take or how it might work remains unclear. It may even entail some cooperation between the ECB and agencies such as the European Investment Bank as well as a strong ‘subsidiary’ element at the national level. 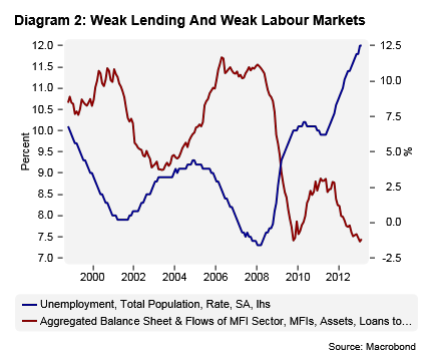 Better To Err By Doing Too Much Than Doing Too Little

It should be acknowledged that a further 25 basis point rate cut would not make a dramatic difference to the economic outlook and we don’t expect the deposit rate to be cut into negative territory unless economic and financial conditions were to deteriorate sharply in the next couple of months. However, the combination of a cut in the ECB’s refinancing rate and the introduction of a new programme designed to accommodate national differences in lending might prove helpful in several ways. First of all, a drop in the refinancing rate would ease funding conditions for companies and households to varying degrees across the Euro area, particularly if augmented by some ‘national’ lending support scheme. Second, action will ease funding costs for those commercial banks that are heavily dependent on ECB financing. Third, a rate cut should weigh somewhat on the foreign exchange value of the Euro (although the ECB would be keen to focus on domestic rather than the external effects in light of concerns about ‘currency wars’ of late). Fourth, a rate could signal some element of policy support at a time when counter arguments to austerity have become increasingly loud. Finally, action now might be seen as buying some time in the hope that a modest recovery will take hold late in 2013. For all these reasons, Mr Draghi has re-opened the door to an early easing that will only be avoided by exceptional strength in upcoming data.