Unconventional policies to be normalised? Low is lasting?

Could the ECB’s mandate be stretched too far?

There was little expectation that ECB president, Christine Lagarde, would deliver any signal of market significance at the press conference that followed today’s first ECB Governing council meeting of 2020. Indeed, so low were expectations that one reporter asked Ms Lagarde whether it might have been better for her to skip the ECB press conference and attend the World Economic Forum in Davos instead.

The main reason that markets see no early policy change is that, both in terms of growth and inflation, the Euro area economy is showing some improvement but this pick-up is modest and still tentative and it is coming from readings that until very recently were far too low for comfort. So, markets see no grounds at present for the ECB to move in either direction by easing further or, on the other hand, to consider unwinding some of the current very accommodative monetary policy.

There was no indication today of any material change to the ECB’s assessment of the Euro area economy that might suggest even a faint inclination towards adjusting policy. Although signs of improvement were acknowledged, the ECB  was careful to largely offset these by indicating continuing constraints. Hence, the press statement pointed to ‘ongoing, but moderate growth’  but qualified this by noting that ‘the manufacturing sector remains a drag’ and also indicated that while employment growth is continuing, it is ‘decelerating’.

In the same vein, today’s statement repeated the judgement that the current monetary policy stance is ‘underpinning favourable financing conditions for all sectors of the economy’ but it omitted December’s reference to a ‘substantial monetary stimulus’ perhaps because the ECB statement also acknowledges both slower loan growth to companies in November and signs of weaker corporate loan demand in the bank lending survey released earlier this week that it suggests likely reflects ‘some lagged reaction to the past weakening in the economy’.

Similarly, price trends are judged to be sufficiently improved not to hint at any need for further stimulus but not nearly robust enough to warrant any suggestion that tightening might be contemplated. Inflation which increased to 1.3% in December is now seen ‘likely to hover around current levels in coming months ’ having picked up as the ECB had signalled in its December statement. While ‘further indications of a moderate increase’ in underlying inflation are noted, this is ‘ in line with previous expectations’ and tempered by the judgement that ‘Measures of underlying inflation have remained generally muted.

While there was little new in today’s ECB press conference, the generally cautious tone and careful attempt not to overstate any signs of improvement in the Euro area may have contributed to some marginal easing in term interest rates and the exchange rate of the Euro in circumstances where financial markets were a little edgier today on concerns about potential negative spill-over impacts from the Coronavirus.
The ECB’s policy review could have far-reaching implications

At the margin, it could also be the case that market thinking was also influenced by the thrust of the press release also issued today that formally set out a previously signalled review of its monetary policy strategy by the ECB. That release suggested the ECB will contemplate the implications of a much changed world for monetary policy.

It remains the case that less troubling but still lacklustre growth and inflation in the Euro area are the critical factors seen keeping the ECB on the policy sidelines for some significant time. However, there has also been some commentary suggesting that the ECB might also be constrained somewhat by a wide-ranging review of its monetary policy strategy that it formally launched today.

As Ms Lagarde again indicated today the ECB’s policy review is expected to take most of the coming year to complete  with the ECB president hopeful that the results of the review might be communicated in November or December.  The significant timeframe envisaged for the review seems warranted by the broad sweep of its ambit. Today’s press release notes that the

This specification implies a root and branch evaluation of the ECB’s aims and instruments and their possible application to a notably broader range of goals than price stability.

The press release went on to describe a range of ‘profound structural changes’ in the global economy have driven rates down and are ‘ reducing the scope for the ECB and other central banks to ease monetary policy by conventional instruments in the face of adverse cyclical developments’. Significantly, in this new normal, addressing low inflation is different from the historical challenge of addressing high inflation’.

The thrust of this press release might suggest that the ECB is focussed on the prospective policy challenges of an economic environment where the mantra of ‘lower for longer’ in relation to interest rates might need to be modified to ‘lower is lasting’ and a related normalisation of the ECB’s unconventional policy instruments. The sense that thinking in Frankfurt is moving even tentatively in this direction could come to present a significant restraint on any movement towards markedly higher term rates.

While the review of monetary policy now outlined by the ECB is altogether more far-reaching than that undertaken in 2003, it might be noted that in that previous episode a change in the inflation target might be regarded as reflecting a response to the experience of the previous couple of years.

In 2003, difficulties in striking a balance between credibly achieving the existing inflation target and not needing to implement a very restrictive policy stance in circumstances of faltering economic  growth prompted an effective easing of the inflation target.

As inflation only dipped below 2% in one month between mid-2000 and the completion of the review in May 2003, the ECB amended the inflation target from the initial goal of  ‘below 2% ‘to ‘below, but close to 2% . As the diagram below illustrates, the new target was close to the average inflation rate seen between the beginning of EMU and that point. It should also be noted that the ECB eased policy during the period of the policy review, notwithstanding a spike in inflation, implying  exceptional and unexpected developments could translate into a policy adjustment even if this seems extremely unlikely for the coming year. 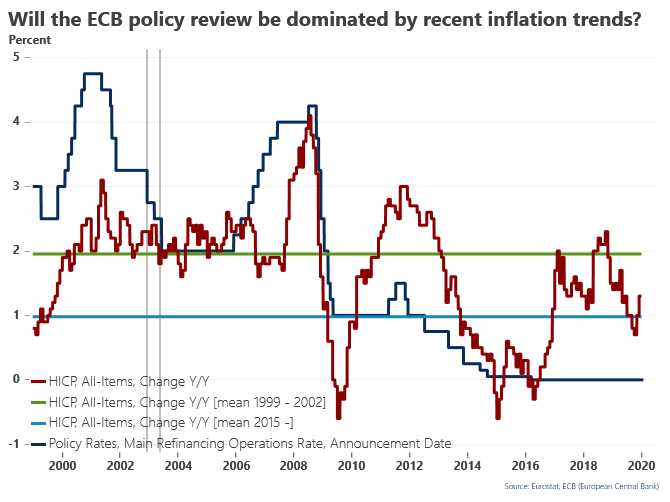 Could the ECB’s mandate stretch much further?

An additional complication in terms of the policy review now beginning is that the ambition for monetary policy set out in the second bullet point in today’s ECB press release is now notably greater than that envisaged in the past and outlined by the previous French ECB president Jean Claude Trichet who noted ‘we have only one needle in our compass. That needle is price stability,’.

Formally reconciling potentially conflicting requirements of these various considerations may leave scope for some disappointment in regard to what the ECB might credibly achieve. A range of questions at today’s press conference suggests the particular positioning of climate change in the ECB’s future monetary policy deliberations  is likely to be a very high profile element in the upcoming review.

While Ms Lagarde relatedly emphasised the importance of this issue, she wouldn’t be drawn on the specifics of what it might mean in terms of policy settings. The thrust of this questioning and the potentially far-reaching implications of the policy review suggest that even if the ECB remains on the sidelines in relation to policy changes in coming months, it is most unlikely to stay out of the spotlight.